The Flash still seems to be stuck in a quagmire of questionable writing for the start of Season Five’s back half in 2019, despite a pretty enjoyable contribution to last year’s big ‘Elseworlds’ crossover event with Arrow and Supergirl. “The Flash and the Furious” brought events back to good old Central City for The Flash’s 2019 debut, where it will be kicking off the year’s run of episodes a week ahead of Arrow, Supergirl and Black Lightning (Legends of Tomorrow sadly won’t be back until April Fool’s Day), and as you can expect, this means another throwaway metahuman is causing trouble in the city, while drama brews among the crew at S.T.A.R. Labs.

As far as midseason premieres for The Flash go, this one is pretty boilerplate. There are still a couple of decent ideas in this episode, to be fair, especially in setting up some promise for the rest of the season’s run in 2019, despite Cicada not appearing at all this week. Overall though, the latest lacklustre villain, and a truly head-scratching heel turn for a previous villain, didn’t really add up to that exciting of a conflict, disappointingly. Joss Jackham, a.k.a. Weather Witch, makes a return this week, and apparently she’s really sorry for that reign of murderous terror that she tried to enact during the events of, “O Come, All Ye Thankful” during this past November. Yes, seriously. Despite being hell-bent on killing her felonious father, Weather Wizard during that episode, Joss is tormented and guilt-ridden for her actions, and legitimately wants to repent in jail. 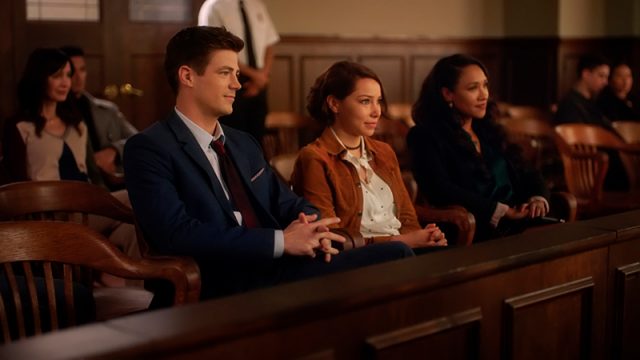 Obviously, this is one hell of a character shift for Weather Witch, who was not previously portrayed with any recognizable hint of remorse in her behaviour. Despite that however, there is a good story idea being proposed here, even if it leaves a few promising story nuggets on the table. Cecile first perceives Joss’ legitimate remorse with her mind-reading powers (I thought those were going away?), during her first day back in court, which leads to her deciding to pursue a lighter sentence for Joss out of nowhere, something that is somehow not suspicious at all to the judge or jury. The idea of Cecile struggling with prosecuting clients that she knows are remorseful due to her mind-reading is interesting, but the show doesn’t really explore that here. Instead, it tries to tie the Weather Witch arc in with Nora’s discovery that Eobard Thawne may not be on the level over in 2049.

Speaking of, things begin with Nora confronting Thawne about his treachery, as displayed in last year’s midseason finale (again, not counting the Elseworlds crossover). Thawne similarly expresses some degree of regret for his part in The Flash’s past, but Nora refuses to believe it, and this in turn has her extra determined to see Joss punished to the maximum extent of the law, believing that bad people are purely bad, and can never change. It would have been ideal if the show didn’t need to portray Nora as being unrealistically, stupidly naive for the umpteenth time, especially when it comes up with a truly ludicrous excuse to bench Barry this week, namely when he touches the dark matter-powered car being driven by this episode’s villain-of-the-week, and ends up being unable to stop phasing for some reason (it’s explained, but even by this show’s standards, it’s a stretch!). Still, the idea behind exploring whether villains can change is a good one, especially when this episode very smartly makes a nod to Leonard Snart heroically sacrificing himself during the first season of Legends of Tomorrow, despite starting out as one of the worst criminals in Central City. 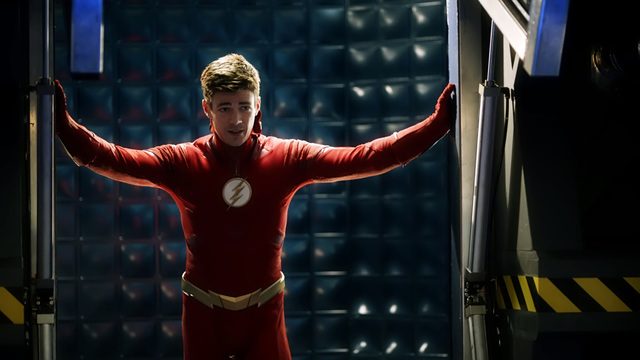 As for the latest forgettable metahuman that The Flash has spat up, it’s another hugely altered DC Comics C-lister (complete with a gender swap once again), this time being Silver Ghost, a very obscure DC villain named Raphael Van Zandt, who could turn his foes to solid silver in the printed panels. In the case of the Arrowverse however, a new female counterpart named Raya Van Zandt simply wields a piece of satellite that lets her remotely take control of any vehicle with an engine. I don’t know how Silver Ghost plays into that idea, but oh well. This latest metahuman hook does at least lend itself to a few fairly exciting action scenes this week, especially with Barry not around to easily stop the criminals, and Nora having to eventually put her faith in Joss to do the right thing and stop Silver Ghost when the two women steal a super-powerful A.R.G.U.S. car, which seems to be impervious to both speedsters and S.T.A.R. Labs tech alike. Joss naturally does the right thing, the criminals are stopped, and Nora learns a valuable lesson about believing in even the worst of criminals, while Barry was left to bumble around the pipeline, reading Mick Rory’s novel, in perhaps one of the greatest Legends of Tomorrow nods that The Flash has featured to date!

The other major storyline of the episode also presented some good ideas, if not wholly original ones as far as superhero dramas go. After Cisco’s dagger injury from the previous battle with Cicada is healed by Caitlin, Cisco discovers a means of designing a metahuman cure, which Caitlin and Killer Frost alike both seem to be opposed to. This story idea is quite clearly ripped from X-Men: The Last Stand and its mutant cure, but it does present some interesting implications, despite Killer Frost destroying the initial cure sample that Cisco was putting together. Regardless, Caitlin eventually concedes that maybe it’s not such a bad idea to give some metahumans the choice of nullifying their powers (she apparently came to this decision off-screen), especially since it may be the best means of defeating Cicada in battle soon, so she takes Cisco to her father’s former lab to build a new cure. It’s good that Cisco and Caitlin agree not to force the metahuman cure on everyone (especially since this would effectively mean that we don’t have a show, nor much of an Arrowverse outside of Arrow and Batwoman), but is there really any chance that they’ll be that successful with this venture? I guess I’m intrigued to find out, in fairness.

Things end with Nora continuing to be suspicious as ever, as she once again agrees to help Thawne with his mysterious agenda, while Sherloque discovers that Nora has apparently deleted all of the files on herself in Gideon’s database. Once again, Nora appears sketchy, and I would imagine that Sherloque definitely has confirmation that she’s not exactly who she appears to be by this point. In any case, “The Flash and the Furious” did its job when it came to putting The Flash on an interesting enough story path for the first chunk of its 2019 run, even if it never really excelled as a midseason premiere especially. Nora and Caitlin dragged down too much of the storytelling this week, and the show really had to strain to completely redefine the Weather Witch character here. Still, the idea of a metahuman cure is certainly intriguing, especially since it’s sure to come into play during the coming battle against Cicada. I wonder if I should even bother complaining about The Flash’s massive roster of throwaway villains-of-the-week by this point, but whatever, it’s still an annoyance. Regardless, there’s at least enough to keep me interested in the series during Season Five’s back half, even if the storytelling could still really use some tightening in 2019.

The Flash 5.10: "The Flash and the Furious" Review
The Flash delivered an acceptable, but very unremarkable midseason premiere this week, as a dark matter-powered carjacker causes trouble in Central City.
THE GOOD STUFF
THE NOT-SO-GOOD STUFF
2019-01-16
72%Overall Score
Reader Rating: (0 Votes)
0%