It’s back to business as usual with Cicada on The Flash this week, and it seems like Central City’s resident metahuman serial killer is kicking things up a notch after returning to work! “Seeing Red” was appropriately filled with a lot of rage on all sides, as Cicada doubles down on his efforts to kill as many metahumans as possible, while a savage injury sustained by Nora during these proceedings also leads to Barry losing his cool, and becoming increasingly desperate to stop Cicada by any means necessary. If this sounds like the show is spinning its wheels, then yes, that’s unfortunately true this week.

Overall, it just feels like The Flash is confused about how to properly capitalize on Cicada at this point. Cicada was an initially promising villain that once again presented a very different overall antagonist for the series, but over the past little while, it feels like he’s starting to suffer from the same problem that The Thinker did last season; He’s just not gelling as a believable threat, nor a truly satisfying one. Cicada has apparently been hiding out with his daughter’s nurse, who is the one to initially talk him into tracking down and killing metahumans more aggressively, but this sudden aggressive turn also has to be made possible with a hasty (and very clumsy) explanation as to how Cicada has managed to track down so many metahumans so efficiently. 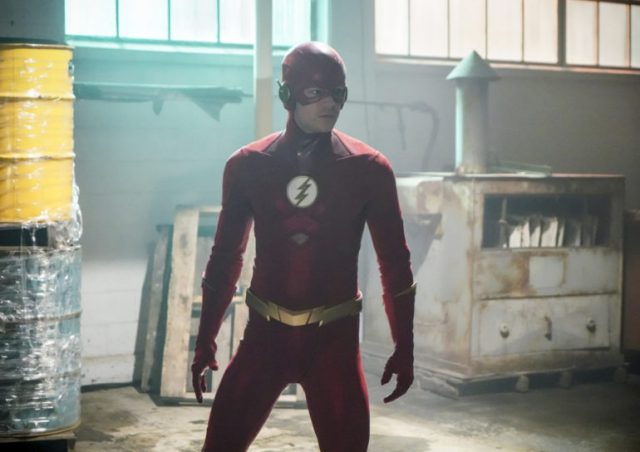 In short, there’s a mole at the CCPD. Because of course there is. To be fair, the show at least tries to present an interesting idea here, having one of the cops that was victimized by Spin become the one to leak metahuman identities to Cicada, but this twist also just opens up a canyon’s worth of plot holes. First, how does this cop even know Cicada? Second, why does this cop feel like aiding Cicada is going to truly benefit him in any way? Yes, I know it’s about ‘revenge’, but that’s really kind of a leap for a devout CCPD officer, don’t you think? Third, how the hell does this officer have an equally corrupt contact in the FBI that eventually leads to Cicada intervening in the climax, even when he had no clear means of doing so? This whole CCPD mole idea just doesn’t add up at all, and it feels like a complete waste in the end, too often brought down by blatantly sloppy writing.

On the bright side however, the idea of Nora being temporarily crippled, and both Barry and Iris being heavily emotionally affected by that, is executed a little better. Barry being enraged at his daughter being injured is resolved a little too quickly in the end, but Iris coming down hard on Sherloque, who is now making it more obvious that he’s poking into Nora’s history, is executed a lot better. The dramatic irony is that the viewer knows that Sherloque is on to something, and is inevitably about to discover Nora’s connection to Eobard Thawne in the future, but Iris aggressively dismisses the idea, no doubt to the detriment of Team Flash in the near future. The Nora mystery is admittedly strengthening a bit, and it’s helping to make up for the fact that the ongoing conflict with Cicada just seems to be rapidly losing momentum by this point.

Another slightly better story arc comes by way of the continued development on the metahuman cure, which Caitlin and Killer Frost are disagreeing on. Cisco entirely sat out this week’s episode, with the excuse given that he’s working off-site at the Tannhauser facility, but this gave an opportunity for Ralph to come back in, and provide a different, less scientific perspective on the metahuman cure debate. After Team Flash has to enlist the aid of Norvok, Amunet’s old associate, to round up all of the criminal metahumans that have since been released from Iron Heights, making them easy targets for Cicada after he got ahold of the CCPD metahuman list, Ralph tries to appeal to Killer Frost and Caitlin alike, from an emotional point of view. Ralph is all for the idea of a metahuman cure, apparently, since it could very well save the lives of reformed criminals like the ones that Barry and co. are trying to protect from Cicada, and despite Killer Frost’s immature objections, which keep messing with Caitlin’s work, Ralph’s speech does eventually cause Caitlin’s icier half to reconsider.

On this note, I really wish that Barry would at least try to tip Cicada off that his team are working on a metahuman cure at S.T.A.R. Labs, since you’d think that this would at least give Cicada some pause, especially if he has an adopted daughter to consider. Sadly though, we’re just left to round up a bunch of random metahuman criminals (with only one, Peek-a-Boo, being a recognizable face from the show’s past), which Ralph has to try and get to safety, while Barry tries to fight off Cicada. Barry actually nearly beats Cicada to death as well, with some help from Killer Frost, but obviously, the show isn’t willing to let go of this villain arc yet, so Nora has to tell Barry to stop fighting, allowing Cicada to conveniently get away. Okay, how many times has Barry’s negligence led to Cicada escaping now? Seriously, Flash, bring some damn metahuman cuffs to Cicada battles, for God’s sake!

This latest lame getaway by Cicada is symptomatic of one of the biggest continued problems that is once again dragging down The Flash’s current season; The over-arching villain just isn’t working anymore. Maybe there’s time for Cicada to rebound in the weeks ahead, especially after Barry’s interesting idea of trying to wake Grace from her coma in order to get Cicada to stand down, but for now, Cicada is just falling into the same trap that The Thinker did last season, namely squandering an interesting villain premise on the same old tired story turns. “Seeing Red” disappointingly ended up being a lacklustre episode of The Flash in the end, even if it did at least have some slightly better subplots outside of the increasingly tedious Cicada battle. Maybe trying a new tactic will end up working out well for Team Flash, because at this point, this same tired Cicada drama is really getting old. The heroes could use a new strategy for narrative purposes just as much as practical ones.

The Flash 5.11: "Seeing Red" Review
The Flash unfortunately stumbles with another underwhelming battle against Cicada this week, as Team Flash must try and get a roster of metahuman criminals out of Central City.
THE GOOD STUFF
THE NOT-SO-GOOD STUFF
2019-02-04
63%Overall Score
Reader Rating: (0 Votes)
0%