Arrow has made it to its 150th episode as of this week, and like its milestone 100th episode to come before, this one’s a real gem! “Emerald Archer” is a standout offering that is sure to serve as a highlight for Season Seven, namely due to its amusing and nostalgic hook of a documentary crew following the former Team Arrow members around, in an effort to get the scoop on their past as vigilantes. This also happens to include cameos from several legacy characters that have since left the show, including Thea, Rory, Sara and Sin (and Quentin, since he’s now dead), even if we sadly didn’t get a villain showcase to match the one for the heroes.

As a celebration of all of the heroes that have made Arrow what it is throughout its seven current seasons, “Emerald Archer” is fantastic. The episode moves back and forth between a mockumentary-style presentation (complete with a Warner Bros. movie logo kicking off the episode, along with an early narration by Kelsey Grammer!), and a more standard Arrow episode, depending on whether the camera crew is capturing the events with the heroes or not. The mockumentary scenes are even done with tongue-in-cheek flourishes that nicely satirize the crime-fueled Netflix and Hulu documentaries that have become popular in recent years, providing a nonetheless effective spotlight on the in-universe question about how vigilantes have affected not just Star City, but also Central City and Gotham City. Grant Gustin even makes a quick cameo in one interview as Barry Allen, out of his Flash suit, of course, to be part of the documentary footage! Sadly, Kate Kane couldn’t be rustled up for an interview herself, it seems.

Seeing the character perspectives both summarize and think about how Star City’s stance on vigilantes has evolved throughout the years is very interesting, and results in some especially standout character work throughout the episode. To top that off, William also returns to Star City this week, seemingly angry and cold towards both Oliver and Felicity, as it appears that something very unfortunate happened while he was away overseas. William does get a pretty nice scene with Zoe, where he starts hinting that he’s beginning to discover his homosexuality, which has been addressed in the flash-forwards (those are once again put aside this week, outside of a brief outro with Connor Hawke and Blackstar), but otherwise, his return doesn’t feel like it’s going to be capitalized on quite yet. Instead, he’s only back because of something Felicity eventually learns towards the end of the episode; William got expelled from his boarding school for some unknown reason.

Even with William’s return, Oliver has his hands full trying to apprehend a mysterious super-vigilante of sorts, whom Curtis dubs, “Chimera.” This isn’t a character that appears to exist in DC Comics lore, surprisingly, but regardless, Chimera combines several traits and features of other vigilantes and criminals from Arrow’s history, and also happens to be outfitted with military-grade armour from Wayne Enterprises! This hybrid vigilante idea is really awesome, and better still, it eventually provides an excuse to bring the old band back together, ironically after Mayor Pollard appears to force Oliver into a corner, demanding that he attend a town hall meeting, wherein she intends to hammer home the point that Oliver should be removed from his position at the SCPD, and that vigilantes have no place in Star City. 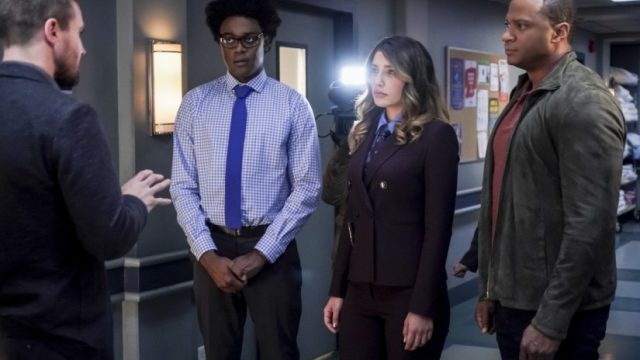 This naturally results in a pretty amazing action scene, as Spartan, Wild Dog and Mister Terrific finally suit up again, with Dinah being nearby to assist with the SCPD, to try and apprehend Chimera, when he inevitably attacks Pollard’s meeting. It’s too bad that Emiko couldn’t join in here, though the episode justifies this by having Emiko get injured during a former encounter with Chimera, and subsequently sneak out of the hospital to tend to her own wounds. The actual apprehension of Chimera is very cool, but the reveal that he’s some random crazy person that Oliver apparently saved seven years ago, all the way back when he was ‘The Hood’, feels disappointing. They couldn’t have made this person someone more significant?

In any case, Diggle, Curtis and Rene are all arrested for suiting up as vigilantes again, and despite Laurel insisting that the D.A.’s office not press charges, Pollard is nonetheless determined to punish the vigilantes. Dinah attempting to quit the SCPD and Oliver attempting to turn himself in help to sell Pollard on Team Arrow’s solidarity however, and considering that Dinah previously saved her life during the Chimera attack, forcing her to admit that she would be dead without the presence of vigilantes, Pollard decides to formally deputize the rest of Team Arrow, bringing them into the SCPD fold. As I predicted, Arrow inevitably would not be keeping these characters out of their vigilante identities forever (though this begs the question of whether Diggle will be pulling double duty between Team Arrow and A.R.G.U.S. now), even if it’s still pretty much relying on the deputizing as something of a loophole. Still, I suppose that Emiko is still out there as a true vigilante, even if she’s currently injured, which I imagine will be very temporary. 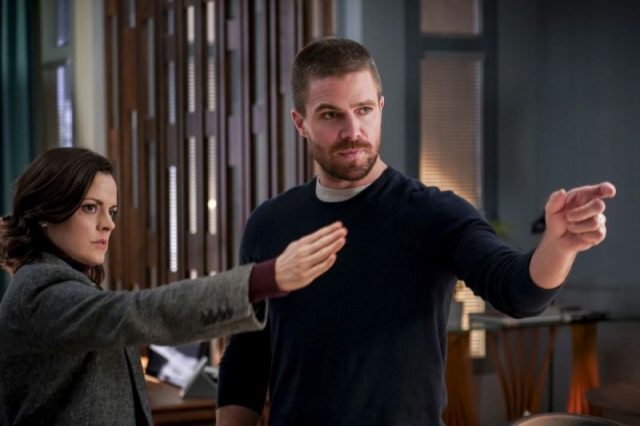 “Emerald Archer” finally pulled the trigger on formally bringing Team Arrow back together to some extent, and it seemed to largely exist to restore the proper vigilante group to Arrow, but it did so with a very clever and entertaining story device that makes the most of the 150th episode milestone. A more interesting man under that Chimera armour certainly would have been nice, but the dangerous quarry that the reunited Team Arrow is up against this week is at least cool in concept, and we certainly get no shortage of quality action during the efforts to apprehend him as well! Not much is being done with William’s return to Star City yet, but his expulsion certainly sets up some interesting drama for later, as does the ominous warning by Blackstar at the end of the episode, when she and Connor Hawke discover the ruins of the bunker, and Blackstar comments that vigilantes were the death of Star City, and they got what they deserved. The flash-forwards remain something of a risky device, since they could make or break the season’s final payoff regarding the vigilante debate, but this particular episode especially helps prove that, despite some of its rough stretches, Arrow remains plenty capable of fresh, exciting and dramatic storytelling, even seven seasons in!