It’s been a while since we’ve had a particularly strong Bullock storyline, but fortunately, Gotham returned to spotlighting Bullock in, “Nothing’s Shocking.” The ongoing conflict with Walker and Dorrance, along with most of the other villainous forces in Gotham City, was completely put aside in this episode, in favour of a trip into Bullock’s past, complete with a reunion with Dix, Bullock’s old partner, who hasn’t been seen on Gotham for a long while. Rounding things off were some underwhelming subplots shared between Bruce and Alfred, and Penguin and Nygma, who more or less ate up screentime and did little else.

The core Bullock storyline also introduces a lesser-known DC villain to the Gotham universe, though this was executed a lot better than the subplots’ antagonists, and with a mostly superior mystery behind it to boot. After two former GCPD officers are stabbed to death in Sirens, Barbara alerts Gordon and Bullock about the killings, which leads to evidence that Dix is the killer. Since Dix has been paralyzed for fifteen years however, something is clearly up, and sure enough, a fake Dix nearly kills the real one after Gordon and Bullock pay Dix a visit, a fake who flees when Bullock appears to peel off their face! Many DC fans would obviously speculate that this is a return for Clayface, a familiar Batman villain who hasn’t been seen on Gotham for a long time (Bullock even suggests looking for Clayface as his first assumed suspect), but surprisingly, the show went a different route here, likely due to the necessity of linking Bullock to the central mystery. 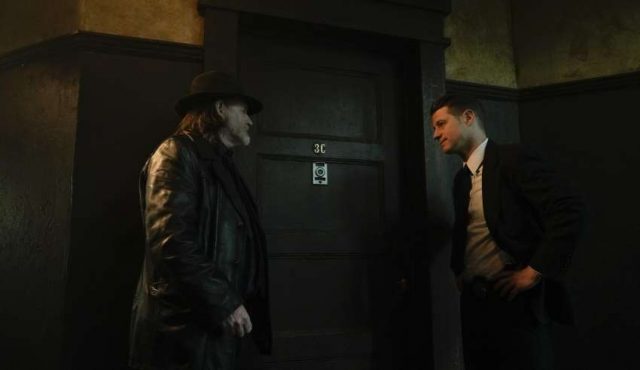 As you can imagine however, the culprit is still another Indian Hill freak, created from Hugo Strange’s experiments. After a young girl of a family whose wife was put in jail by Bullock and Dix after killing her husband two decades ago is learned to have faked her death, Gordon, Harper and another officer encounter Jane Cartwright, who is the Gotham universe’s take on Jane Doe, a master of disguise in DC Comics lore, who literally wears the faces of her victims! In the case of the Gotham universe however, Jane shapeshifts into the form of anyone she touches, and appears to have some sort of ability to alter her physical dimensions at will (as revealed when she slips out of handcuffs during an interrogation), more or less making her a spiritual successor to Clayface in this case. Still, this does create an interesting obstacle for Gordon and the GCPD, after Jane gets loose and impersonates Bullock to murder Dix.

As much as a precinct lockdown, and a brief standoff with Jane impersonating Barbara don’t manage to fully satisfy, the payoff to this past case with Bullock is nonetheless pretty great. The truth gradually comes out that Bullock forced a statement out of Jane when she was a child, in order to lock up her mother, with Jane’s mother’s guilt ultimately left up to interpretation, due to a lack of physical evidence that she killed her husband, who was also later revealed to be abusive. When Bullock tries to talk Jane down from her killing spree, he’s forced to shoot her dead as well, later confessing to Gordon what he did, and how his concern with making detective led to him compromising his morals, and putting him on the path of a corrupt cop, until he met Gordon. This was a very nicely tragic and morally grey turn for Bullock, who has been such an obvious hero on Gotham for so long now that it’s easy to forget what he started out as; A corrupt, selfish detective who was meant to challenge Gordon’s morals. With Bullock’s storyline now coming full circle, Gordon finds himself unable to give him forgiveness, making one wonder how this story arc could have played out, had Gotham not already been marked for a final season this year.

It’s also too bad that the subplots really couldn’t keep pace with the core villain storyline either, as I said. Batman/DC fans may at least get a kick out of another villain debut in the Penguin/Nygma storyline though, when Arthur Penn surprisingly turns up in their hideout, alive and well! How did that happen, after we clearly saw Penn being shot dead at Haven?! Well, the show doesn’t bother to justify it, beyond Penn, “Waking up in the morgue.” Whatever, I guess. That lazy hand-wave explanation is strike one, to say the least. There is a cool idea that the show really can’t fully realize here either, as Penn carries a suitcase that is revealed to contain none other than Scarface, the manipulative criminal dummy of Batman villain, Ventriloquist! The idea of Penn being a Ventriloquist forerunner is actually kind of clever, especially when Penguin keeps mistakenly calling him, “Arnold”, in reference to DC Comics’ original Ventriloquist, Arnold Wesker. This whole storyline nonetheless ends up being pointless however, since Penn and Scarface barter to be taken on Penguin’s and Nygma’s escape sub, only for Penguin to shoot off Scarface’s head, before Nygma shoots Penn in the head and kills him… Again. So, basically, this was a way for the showrunners to feature a moderately recognized Batman villain on Gotham that they couldn’t otherwise figure out. Fair enough, I guess, but this story hook with Penn is clearly another victim of Gotham being ended too soon. This idea obviously feels like the foundation for an extended story arc, not something that was meant to be contained to just one episode.

The Bruce/Alfred subplot similarly feels like a rushed idea that wasn’t allowed to truly develop. After Bruce and Alfred talk to a woman that was forced to live near the contaminated waters, losing her husband in the city’s sewers, Bruce and Alfred decide to venture into the sewers alone. They then find the husband, who is apparently being menaced by… A guy. Yes, there’s apparently a guy that got super vicious after being driven mad by Jeremiah’s chemicals being in the water, and that’s the great big sewer menace that was hyped up at the start of the episode. Lame. This could have been Killer Croc, or Man-Bat, or hell, I would have even settled for Ratcatcher! Instead, the entire subplot seems to be a weak nod to how Bruce eventually comes up with the concept of Batarangs, namely when he has to throw some sharp objects at the sewer guy while he’s attacking Alfred. That’s really the best Batarang explanation that Gotham could come up with? What a waste!

“Nothing’s Shocking” did at least provide a strong means of having Bullock’s character arc come full circle, even if the show’s Ventriloquist idea mostly leaves its potential on the table, and Bruce and Alfred may as well have just sat this episode out entirely. Gotham’s final season has brought forward so many awesome ideas that just won’t get a chance to be what they could have been, since FOX is forcibly ending the show being it was meant to end, and that’s very frustrating. Sure, getting a pre-determined final season is a hell of a lot better than Gotham being abruptly cancelled after the massive cliffhanger of Jeremiah blowing up all of the bridges out of town, but it still sucks to see that there are certain future Batman villains that just won’t be allowed to truly flourish in a show that’s meant to spotlight them most of all. I suppose that this more personal Jane Doe conflict for Bullock still managed to satisfy though, as we presumably begin to start gearing up for that big final battle that was teased in the season premiere’s opening flash-forward over the final handful of upcoming episodes. It’s getting a lot easier to nonetheless dwell on what might have been for Gotham however, had it been allowed to actually expand and end on its own terms.