After a brief hiatus, Arrow picks up again with the chance to establish a brand new villain, while also further exploring the bombshell previously dropped during the flash-forwards; Blackstar is Mia Smoak, the biological daughter of Oliver Queen and Felicity Smoak, and William’s sister! “Brothers & Sisters” certainly hammered home the theme of strained sibling relationships, and it mostly did so to solid effect as well, contrasting the news of Felicity learning that she is pregnant with Mia in the present, with Oliver trying harder to get closer with Emiko, despite disapproving of his newly-discovered half-sister operating as an unsanctioned vigilante in Star City.

This family-focused storyline was also balanced out by a heavy amount of focus on A.R.G.U.S. and the Ghost Initiative, and this is where our big new villain starts coming into play. Turns out, Dante really is a tough nut to crack, since Diggle and Lyla are still throwing everything behind rounding him up, and have now started training the actual villains of the Ghost Initiative, not just their VR doppelgangers, to be a true covert task force. With Diaz serving as the key lynchpin of the operation, Diggle decides it’s time to reveal to Oliver and Felicity that Diaz is heading up the newly-revived and re-branded Suicide Squad, which Oliver gives the Diggle the benefit of the doubt on, while Felicity becomes enraged, and sees Diggle working with Diaz as a betrayal of his friendship. 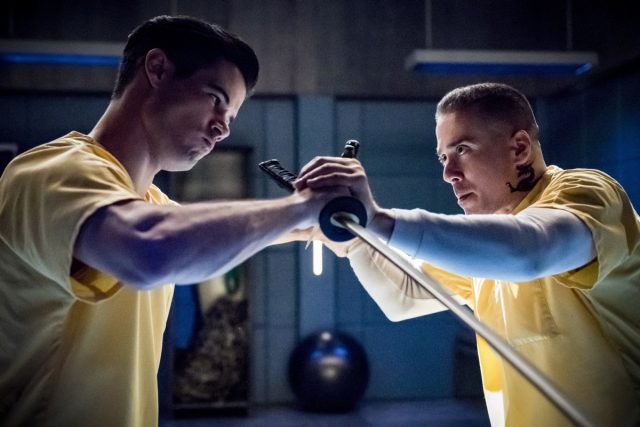 Surprisingly, it’s Laurel that ends up being the first one to deduce that Felicity is pregnant, which she does immediately after walking into Felicity’s apartment, and detecting the lack of alcohol, and abundance of junk food. Wait, Oliver didn’t notice that? I get that Oliver is busy (and male), but Laurel having to be the one to reveal to the audience through dialogue that Felicity is indeed pregnant is a bit of an odd way to introduce this turn to the present-day events. Who knew that Earth-2’s Laurel was such a baby expert, eh? It’s also a bit anti-climactic to have Laurel decide that she can no longer go along with Felicity’s renewed desire to kill Diaz once again, simply because she enjoys being the D.A. a lot. Well, sure, but Laurel’s character is sure doing a hell of a one-eighty by the show’s current events, almost completely losing her edge, despite also having the believable incentive of wanting to take revenge for the death of Quentin. Sure, I get that Laurel is maturing as a character, and I do like this unlikely friendship that Felicity and Laurel have struck up this season, but since when does Laurel care about Felicity’s moral fiber to this degree?

Similarly, the flash-forwards in this episode are a bit of a bust, ultimately just filling time, while the characters take in the revelation that Blackstar/Mia is related to William. Mia originally attempts to break away from both William’s crew and John Jr., but William commiserating with Mia about the shortcomings of their parents, who supposedly lost touch with William after he moved in with his grandparents during the present-day events (does this mean that child William is permanently gone from Arrow?), helps Mia to reconsider her new alliance. Mia opening up the Rubik’s Cube that William is carrying around with a second solve is also kind of interesting, with a mysterious answering machine tape being inside, but for now, we don’t see the significance of this. The flash-forwards taking a breather isn’t necessarily the worst call, since the true nature of Blackstar’s identity is a fairly big twist. I do wish however that at least a little more had happened if the show was going to bother going back to the future again here.

Fortunately, Oliver’s struggles with Emiko generally fared better, after Rene lets Oliver in on Emiko’s mission to exact revenge for her mother’s murder. Oliver trying to talk down Emiko, who stubbornly refuses to give up the Green Arrow mantle, made for a lot of great scenes, especially when Rene gets the rare and believable opportunity to be the voice of reason behind the Green Arrow sibling rivalry. Rene appealing to Oliver’s own obsession during his early tenure as The Hood and The Arrow, and forcing him to see things from Emiko’s point of view, helped the two archers find some common ground, with Oliver ultimately breaking SCPD protocol, and putting his family ahead of proper procedure. This is a little sappy and not completely realistic, but it also nicely proved that Oliver is not the same man as Robert Queen, being willing to put his position on the line in order to let Emiko know that she’s not alone in her quest to find justice.

Surprisingly though, it was Dante who ended up being the biggest and most shocking element of the episode, with the Ghost Initiative players eventually cornering Dante, alongside Diggle and Lyla, at a party. When Diaz blows the op and tips Dante off that it’s a setup however, Dante flees the party, and fights off Oliver, who also shows up to assist, being revealed as a highly skilled knife-wielding martial artist (because Arrowverse), before escaping. This results in Diaz being taken back to Slabside for reneging on his Ghost Initiative deal, with Diggle deciding to take the fall for Lyla over the Ghost Initiative’s public embarrassment, so that Lyla doesn’t have to resign from A.R.G.U.S., after it’s also revealed that Lyla’s superior was a traitor, and in league with Dante. It seems like a cut-and-shut end for Diaz being part of the Ghost Initiative, especially since Felicity ultimately decides to randomly suppress her desire to kill Diaz so that he can be taken into custody, which basically makes this episode’s entire character conflict with Felicity lame and pointless. Fortunately, the final twist with Diaz is more than worth it, since Diaz is suddenly doused with gasoline in his cell via the sprinklers, and is soon after set on fire by someone tossing in a lighter, burning to death in the process! 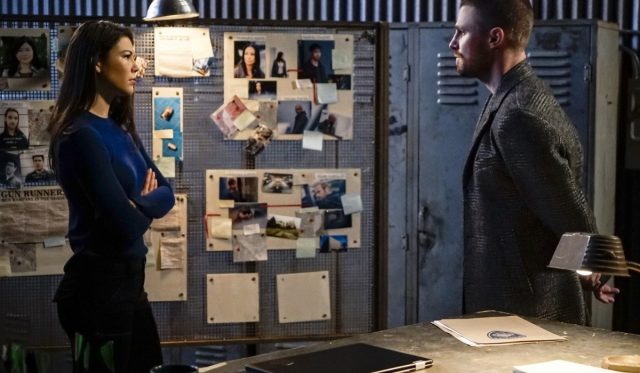 This shocking and unexpected death for Diaz, who has been such an imposing and dangerous villain for almost two whole Arrow seasons now, was also paired with another huge surprise; Dante appears to have been the one who trained Emiko, and he’s still connected with her, after he visits Emiko in her lair within Star City! Tying Dante in with Emiko feels smart, and should nicely unite the separate agendas of A.R.G.U.S. and Team Arrow, especially now that Diggle appears to be permanently leaving A.R.G.U.S. in the near future. “Brothers & Sisters” was overall packed with lots of strong drama, and a few inspired surprises, even if it didn’t do much for the flash-forward storyline’s revelations yet. Killing off Ricardo Diaz is an especially huge step for Arrow, after the show seemed to have grown quite comfortable making him the spiritual successor to Malcolm Merlyn over the past couple of seasons, but perhaps Dante will be able to fill the void of the show’s dangerous new arch-villain, even if Felicity will no doubt get to sleep more soundly, knowing that someone did her dirty job for her.