Black Lightning’s ‘Book of Secrets’ pod hasn’t really amounted to many exciting developments at this point, even with the partial introduction of the Masters of Disaster. Tobias Whale and the MOD metahumans alike completely take a backseat in the pod’s final episode as well, “The Book of Secrets: Chapter Four: Original Sin”, which instead finishes laying the groundwork for Season Two’s final duo of episodes, namely by cementing a new threat at the ASA, and (mostly) completing Jennifer’s long-awaited Lightning costume. This episode also takes the opportunity to resurrect an old foe from Black Lightning’s first season, even if somewhat out of the blue.

Turns out that not even an explosion can kill Lala, since he returns once again in this episode, cornering Jefferson within his classroom at Garfield High. Weirdly, it’s not until the end of the episode that we learn exactly how Lala was resurrected, namely when his organs appear to be dumped into some sort of pool, wherein he’s regrown by a mysterious medic who points him to Jefferson. Who is this character? Why does he care about resurrecting Lala? I have no idea. This will hopefully be answered over the next couple of weeks, but I suppose I’m not unhappy that Lala is back. He is a pretty cool new take on DC villain, Tattooed Man, and Jefferson trying to reach Lala after he fell in so deep with Tobias over a traumatic past experience could lead to some interesting storylines down the road.

All told, the scenes with Jefferson and Lala are among the strongest story elements in this otherwise fairly ho-hum Black Lightning episode. This is a great chance to see Jefferson’s resolve and determination to continue reaching troubled students on a civilian level, even long after they’re out of his school, and long after they’re seemingly lost. Seeing Jefferson face down the clearly deranged and confused Lala, as he’s continually tormented by the spirits of LaWanda and Will, was very dramatically tense, and the fact that Lala shoots Jefferson off the bat really hammers home how real the danger is, particularly since Jefferson is cornered, and can’t just suit up as Black Lightning. It might have been nice if Jefferson being barred from his family and friends had any real consequences, since they keep talking about failing to reach him, and nothing beyond that, but whatever. At least the episode ending with Lala eager to kill Tobias sets up a pretty promising plot device for the season’s climax over the following two episodes.

Outside of the main events with Jefferson and Lala, a whole host of subplots unfold within this episode, which mostly feel like they’re thrown together to set up for the season’s final two episodes. Perhaps the most noteworthy among these subplots is Lynn’s, as she begins to train Wendy to hone her aerokinesis powers at the ASA facility. Agent Odell begins to doubt Lynn’s methods, saying that she’s becoming too sentimental, and eventually, Lynn is barred from Wendy’s training area, left to watch as Odell pushes her way too hard, threatening her life in turn. Lynn being helpless to save Wendy doesn’t lead anywhere of note yet, which is a frequent problem with most of the storylines in this episode, but fortunately, her storyline still has a pretty solid payoff. We finally get confirmation in this episode that Odell is fully aware of the Pierce family’s metahuman powers, and after murdering all of the technicians that set up surveillance around the Pierce house, Odell single-handedly spies on the Pierce family, for some unknown reason. Odell being shady and morally ambiguous continues to work well, even if he’s looking less trustworthy by the second at this point. 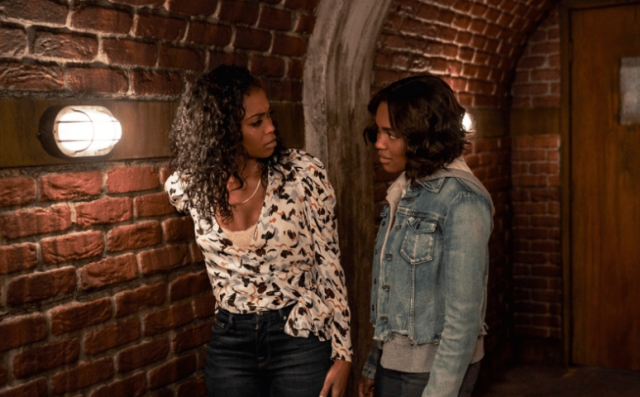 Another noteworthy subplot is Jennifer finally getting her super-suit developed, and giving Gambi input on what she wants. This is mostly played for chuckles at first, though the growing weight of Jennifer’s new superhero identity is nicely built throughout the episode, as she talks to Anissa briefly about not being able to move on from Khalil, before goofing off in her suit almost causes her some serious issues in the training sphere. Jennifer’s actual Lightning outfit still hasn’t finished being developed, but the interactions between Jennifer, Lynn, Anissa and Gambi are nonetheless pretty great here. There’s a good combination of cute family humour and brimming tension throughout these moments, though I have to say that my favourite part is when the classic Black Lightning comic book suit was briefly brought out, which is allegedly what Gambi originally designed to use in the field for Jefferson. If nothing else, it’s a cool and funny Easter egg for DC fans!

The remaining two subplots are barely worth mentioning, and are more or less further ways to keep getting the characters up to speed for the season’s climax. Anissa goes looking for Grace at her supposed adopted brother’s apartment, only to get warned away. There’s a brief scuffle when she returns as Thunder, which the mysterious assailant gets away from, and it’s revealed here that the mystery man is in fact Grace, who has some sort of ability to shapeshift, and some sort of appetite for animal flesh. Considering that Grace is heavily deviating from her DC Comics counterpart on Black Lightning, due to the inability to reference her connection to Wonder Woman and the Amazons from the printed panels, the mystery behind Grace is interesting, but the show is still taking too long to have Anissa discover the obvious truth about Grace being a metahuman.

The remaining subplot involves Henderson, who discovers the existence of Todd Green, and that he was subsequently killed by Tobias’ car bomb… And that’s it. So, essentially, Henderson may as well have not shown up at all in this episode. It will be nice to finally end off the ‘Book of Secrets’ story pod for Black Lightning, because it ultimately feels like complete and total filler for the most part. Lala’s resurrection is kind of interesting, and his scenes with Jefferson helped elevate the episode, as did the rising threat and tension with Lynn and Odell. The Anissa/Grace storyline continues to grow more tedious by the week though, and while it’s exciting that Jennifer is finally getting her super-suit designed, it’s still not completed by the time this episode is over. “The Book of Secrets: Chapter Four: Original Sin” does at least do a fair enough job of setting up the final two episodes for Black Lightning’s sophomore season though, especially now that the ASA has officially become just as much a problem for the Pierce family as Tobias Whale!