The Flash finally returned after several weeks off the air, with a promising battle that was teased right from the beginning of the season; King Shark taking on Gorilla Grodd! It’s quite an ingenious story hook when you think about it, pitting the show’s two biggest and most dangerous animal-themed villains against each other, and fortunately, “King Shark vs. Gorilla Grodd” definitely doesn’t disappoint with its titular duel! One could likely give or take the rest of the episode, but considering that The Flash has once again started to fumble the majority of its fifth season, it’s nice to get another episode that’s significantly better than most of what the season has offered, especially in terms of sheer entertainment value.

Another plus in this episode is that we get to take another well-earned break from the increasingly unrewarding Cicada battle, and instead focus on the finalization of the metahuman cure. With Cisco finally returning from the Tannhauser Facility with a complete cure in his hands, Team Flash deduces that their next step is to test the cure on a metahuman. The obvious problem here however is that most of the metahumans in Central City are either locked up in Iron Heights, chased out, or dead. There is however another option; A metahuman from another Earth, in this case, Shay Lamden, a.k.a. Earth-2’s King Shark, who remains in captivity at A.R.G.U.S. Fortunately for Team Flash, the Earth-1 doppelganger of King Shark’s wife, Tanya has devised a way to communicate with him quite easily as well! 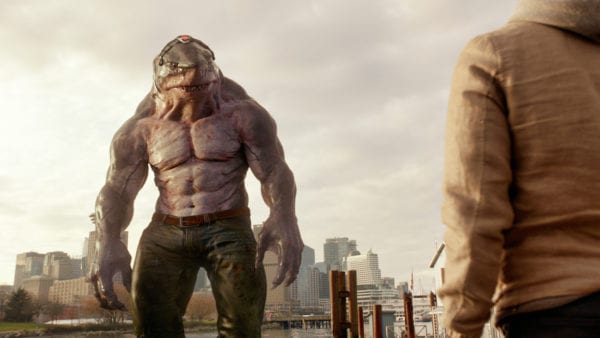 Naturally, this doesn’t go according to plan, and it’s not long before King Shark goes berserk again, running amok in Central City, somehow able to easily hide from both A.R.G.U.S. and S.T.A.R. Labs resources. When he’s cornered again, he also nearly kills Cisco, forcing Barry to make an executive decision and forcibly inject King Shark with the prototype cure, which does successfully turn him human again, even if the dark matter in his system begins regenerating, necessitating a second cure to make the change permanent. There’s a bit of a debate started here between Barry, Cisco and Caitlin regarding Barry’s actions with the cure, and taking away King Shark’s freedom of choice, but the debate is frustratingly under-developed. Barry backs down far too quickly, and there’s never any effective discussion regarding when the cure needs to be forced on a metahuman, for the sake of someone else’s well-being.

Like I said however, the resulting titular duel of the episode at least doesn’t disappoint at all, stretching that paltry CW budget as far as the show could possibly take it! When Cisco blasts Barry, and Caitlin walks off with the Telepathic Crown that Tanya designed, it’s revealed that Grodd was the one responsible for making King Shark go berserk, using the Crown’s power to try and control him. Since Grodd can’t fully control King Shark however, on account of King Shark having a brain that’s part animal (that’s an interesting limit to Grodd’s psychic abilities), it’s decided by Team Flash to transform Shay back into King Shark in order to take down Grodd before he can enslave everyone in Central City, even if that would render the change permanent. Shay giving up his human form to take down Grodd, which is done on a Central City-scale duel that’s actually pretty badass to watch (albeit by television standards), is undeniably bittersweet, once again reminding Team Flash that some of their metahuman foes really can surprise them.

The fact that Shay permanently gives up his humanity to save Central City is also meant to provide a dramatic payoff to Tanya falling in love with her dead husband’s Earth-2 doppelganger. This essentially gives Sherloque something to do in this episode, since he can’t otherwise contribute to all of the scientific wizardry that’s necessary to help King Shark. The whole strained romance with a shark man idea isn’t terrible on paper either, and nor is Sherloque trying to relate it back to marrying the same woman five times across five different Earth’s. It’s pretty clear however that the show just didn’t know what to do with Sherloque here, forcibly inserting him into a romance that feels sweet, but also very predictable and undercooked. The final scene of Tanya placing a hand on King Shark’s tank at A.R.G.U.S., cautiously optimistic about making a relationship work, is actually a perfect note to leave King Shark’s character on though, especially since he’s effectively redeemed himself, and likely won’t be used as a villain again in the near future, if at all.

The remaining subplot of the episode centers around Iris, and is more or less an excuse to reveal to the audience that Jesse L. Martin is finally able to return to The Flash, after being put on temporary leave for a back injury, which was explained in-show as Joe visiting Wally in Tibet with Jenna. It’s really nice to have Joe back, because the hole in the series’ lead ensemble was quite evident over the past several episodes. It’s just too bad that Joe and Iris didn’t have anything useful to do in this case. Iris expresses apprehension about being around her family members, since Cicada is aware of her identity after their scuffle in his apartment, which prompts Joe to give Iris a punching bag in her new office… And that’s it. First of all, how does Iris being near her family make any difference, when Cicada clearly has an outstanding outlet of information regarding his victims? Second, hasn’t the West family already survived several super-powered psychopaths that Iris quite blatantly provoked? What makes this case any different?!

Still, “King Shark vs. Gorilla Grodd” provided a nice boost for The Flash, which is good, because it doesn’t seem like Season Five is going to improve that much by this point. The battle between King Shark and Gorilla Grodd itself was great, and while the romance with Tanya didn’t completely feel satisfying, it was cool to see new dimensions added to King Shark’s character, especially when we got that fleeting glimpse of him in his human form. It’s also good to finally have Joe back on the show, even if he didn’t have much to do in this episode, beyond help Iris through a non-conflict that she really should be more hardened against by now. With the metahuman cure now complete and proven effective, we’re probably going to have to go back to the tiresome Cicada conflict after this, but at least we got to have some good old fan-pleasing fun here, and that’s something I can definitely appreciate!