NOTE: Spoilers from throughout the second season of, “Black Lightning” are present in this review

Despite being entirely disconnected from the rest of The CW’s shared ‘Arrowverse’ television shows at this point, Black Lightning remained one of the network’s stronger DC dramas throughout its sophomore season. Fully embracing pod-based storytelling, the second season of Black Lightning continued to expand the scope of the show nicely, leaving arch-villain, Tobias Whale in place as the biggest threat to its titular superhero and the city of Freeland, while also introducing some cool new obstacles for the Pierce family, who are also facing Jennifer’s powers continuing to manifest. This all leads to a solid helping of super-powered action and drama, even if the latter definitely excels over the former in the case of this particular season.

The pod-like structuring of Season Two’s storylines generally works pretty well, with most of the pods nicely balancing key story arcs of their own, while still maintaining something of a loose connection and overall conflict with each other. Even as the threats changed, many of the Pierce family members in particular faced the same, ever-evolving obstacles throughout the season, which mostly worked to good effect. Jefferson is no longer principal at Garfield High, for example, having to surrender his position to a Caucasian successor, Principal Mike Lowry. Lynn must also contend with her new work regime under the ASA, trying desperately to help Freeland’s ‘pod kid’ metahumans, while also dodging scrutiny from the morally ambiguous Agent Odell. Even before fully embracing her metahuman powers, Jennifer also struggles through a tumultuous romance with Khalil Payne, now forced to work as an enforcer to Tobias Whale, the deadly, “Painkiller.” 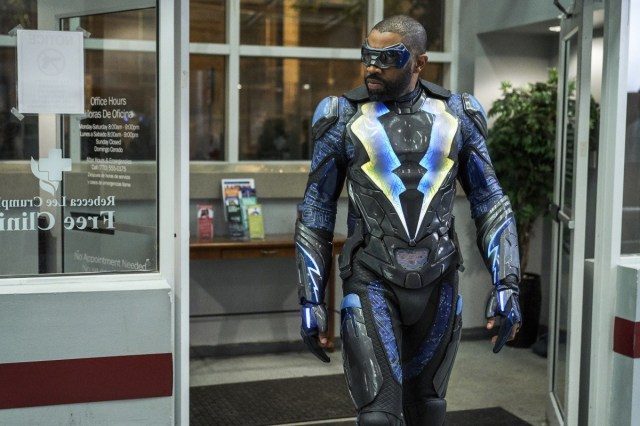 There’s a lot going on throughout Black Lightning’s sophomore season, despite it still having a reduced episode count compared to The CW’s main trio of flagship DC dramas, Arrow, The Flash and Supergirl. The 16-episode count helped keep the pacing smooth however, focusing the show on quality-over-quantity, even if Black Lightning’s modest ratings and standalone status means that it currently has to share a Monday night timeslot with the also-modestly-rated (and also criminally underrated), Legends of Tomorrow, which will now take its place for the remainder of the regular 2018-2019 television season. Even with action taking a backseat in many places throughout Black Lightning’s second season as well, the dramatic storytelling was often very strong, with only a few weak pods, such as the, ‘Book of Secrets’ arc, which simply filled in some loose plot gaps before the superior ‘Book of the Apocalypse’ arc could deliver a much more solid two-part season finale.

Fortunately, there were many other strong pods to compensate, most notably the season’s first handful of offerings. ‘The Book of Consequences’ nicely set the stakes for the season, particularly in removing Jefferson from his former post at Garfield High, with the, ‘Book of Blood’ also being a big highlight, even if it was rather disconnected from the rest of the season’s events, as Black Lightning and Thunder have to travel to South Freeland to fight metahuman oppressor, Looker. The most memorable pod of the season however is likely the ‘Book of Rebellion’ pod, despite some of its diminishing returns, since it involves Jennifer and Khalil trying to go on the run, escaping their respective struggles. Not only does this serve as the key turning point for Jennifer deciding to craft her DC Comics identity as superheroine, Lightning, but it also hit with the biggest emotional punch of the season, as Tobias ends up crippling Khalil by brutally ripping out his spinal implant towards this arc’s conclusion, soon after leading to Khalil dying from his injuries. This is undone to some degree when Khalil is shown to be alive in a hidden ASA pod at the end of the season, but seeing a character that was so ruthless in Season One become surprisingly sympathetic and tragic in Season Two was very satisfying, especially considering how well this tied in with Jennifer’s evolution into Lightning. 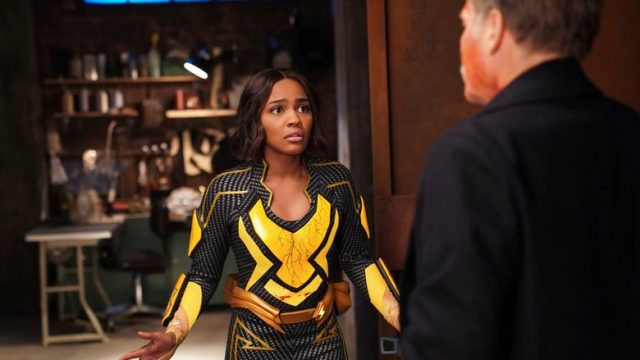 Jennifer really was the MVP of Black Lightning’s sophomore season in many respects as well. Much of the season is built around Jennifer finding her resolve to embrace her powers and become Lightning, and this comes with no shortage of challenge, tragedy and loss for her character. The loss of Khalil is obviously the big driving factor, but it’s also interesting to see both Jennifer and Anissa alike also find themselves struggling with darker paths, while Jefferson must desperately try and keep their ideals in line. Jennifer’s desire to murder Tobias and take revenge for Khalil’s death ends up getting resolved disappointingly easily in the end, but it’s still engaging to see Jennifer have to conquer her inner darkness, in order to try and live up to her father’s example. This struggle with Jennifer also generally worked a lot better than many of Anissa’s story arcs in Season Two, with Anissa often getting frustratingly shafted in lieu of her sister’s storylines here, especially when Anissa is left to spend most of the season either robbing gangsters, or bellyaching about her frequent girlfriend, Grace Choi, whose tedious metahuman drama quickly became more trouble than it was worth to keep listening to.

Fortunately, even if the drama came first in Season Two, we still got some really solid superhero battles throughout Freeland, often courtesy of Tobias Whale. The latter portion of the season really amped this into high gear, with Tobias unearthing the hidden pods of DC mercenary team, the Masters of Disaster, and enlisting Lynn’s scientific nemesis, Dr. Helga Jace to try and help him build a stock of metahumans to sell as weaponized slaves, to the highest bidder. Tobias spent much of Season Two’s early stretches grandstanding, and accomplishing very little beyond smacking around Khalil, but once he finally found the nerve to finish Khalil off for good (even if Agent Odell appears to be in the process of resurrecting him), he once again became more than a worthy threat to the Pierce family, especially with several dangerous metahumans at his disposal. Tobias even got a love interest in Season Two, Giselle Cutter, a knife-wielding metahuman who doesn’t appear to exist in DC Comics lore, but one that nonetheless leaves a strong impression, even if she ends up walking out on Tobias at the end of the season. I’m sure she’ll be back though, especially as the season ends with Tobias finally being captured, de-powered and tossed into an ASA black site, something that I’m sure will also leave The 100 with an enormous power vacuum!

Even if some story arcs worked better than others, Black Lightning stayed strong throughout much of its second season, continuing to stand as one of the better DC dramas currently on The CW, and modern television in general. It’s still a shame that the show can’t seem to find a way to connect itself to the shared ‘Arrowverse’ continuity that Arrow, The Flash, Supergirl and Legends of Tomorrow (and Batwoman, should it get ordered to series), currently enjoy together, but fortunately, Black Lightning is still doing a good job of standing entirely on its own. The improved pod-based story structuring helped Season Two unfold in a smoother, better-paced fashion compared to the first season, and virtually all of the show’s lead characters got plenty of moments to shine, especially with some cool new threats to face, like Looker and the Masters of Disaster. Black Lightning’s scale appears as if it’s just going to keep growing as well, now that Markovia is coming to invade Freeland during Season Three, potentially giving the Pierce family an even greater threat to overcome than Tobias Whale, even if Freeland’s most enterprising criminal mastermind is bound not to stay locked up for long!