Supergirl really hit a high note with, “The House of L” during the previous week, which finally managed to bring Red Daughter into the season’s ongoing storyline with aplomb. As expected though, the show seems to have trouble maintaining its good ideas’ potential this season, and that problem cropped up yet again with, “All About Eve”, another episode that stalls most of the storytelling momentum, and mostly exists to waste time. There is a solid J’onn subplot that helps to elevate things, but that alone can’t entirely salvage other core storylines that just don’t manage to effectively engage viewers.

The episode begins well enough, with Kara dropping into the DEO to offer her existence with the ongoing hunt for Lex Luthor. Surprisingly, Colonel Haley is amenable to the idea of taking point with the President’s Alien Amnesty repeal defenses in Washington as well, leaving Alex available to help hunt for Lex with Kara. This is a decent chance to continue playing with the fact that Alex is no longer aware of her sister’s secret identity as Supergirl, and Lena, another friend of Kara’s that’s also oblivious to her being Supergirl, is also taken along, despite being found drugged in her office by Alex at the very start of the episode. 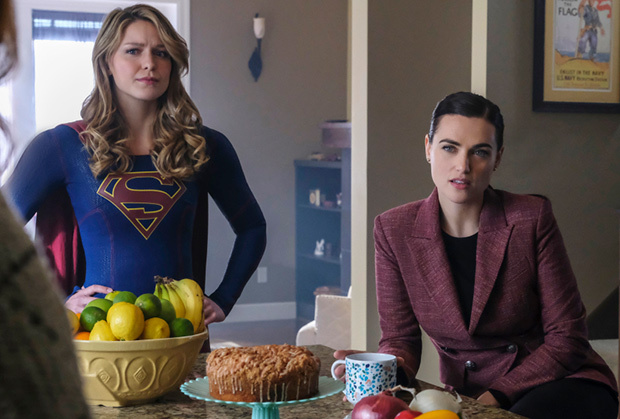 Having Supergirl work with both Alex and Lena is a great idea on paper, especially when the three make the sound decision to target Eve Tessmacher, rather than Lex Luthor himself. There’s even a decent idea brought up when the three have to confront an aunt of Eve’s, who was formerly dying of cancer, but was healed by Eve, using the Harun-El serum. It’s just frustrating that the show can’t seem to stick with the idea of making Eve a truly complex character. Instead, her motivations are boiled down to a childish obsession with Lex, and her actions amount to a vapid desire to please both him and her family. That’s really the best that Supergirl can do here? The show really has a chance to play with Eve’s morality and ethics, but it just keeps wimping out and going for the easy answers. Hell, the same is even true of the Supergirl/Alex/Lena tension, which just ends with Kara apologizing for her emotional thinking, and nothing else being said about it. Okay, that’s nice, but again, is this really all of the drama we could mine from this story idea?

Thankfully, the J’onn subplot is a lot better, as I said. This involves J’onn trying to telepathically channel his late’s father presence with the Staff of Kolar and the sacred Martian symbols, which eventually results in a manifestation of Myr’nn appearing in his office! Myr’nn seemingly scolds J’onn for failing, and moves to take the symbols away, resulting in J’onn trying to impotently protest that he’s trying to be a peaceful man, but just doesn’t know how. David Harewood’s performance was truly excellent this week as well, with J’onn eventually losing his composure, and declaring aloud that he is the Martian Manhunter, and was never meant to be a man of peace! This moment of self-actualization was hinted at when he used the Staff of Kolar to destroy Manchester Black a couple of episodes ago, but seeing it truly come to life here was brilliant, finally giving J’onn the answers he needs, while also allowing him to make his final peace with his departed father, without the crisis of Reign rushing along their final moments, like it did last season.

Unfortunately though, the ongoing government storyline on Supergirl is also still an issue, with the Alien Amnesty Act once again being repealed, despite the peaceful protest from a few weeks ago supposedly causing enough dissent to kill the repeal effort. Did the show just forget about that? Why are the characters treating the march like it was a success, if it clearly didn’t do anything? Moreover, this just makes, “Stand and Deliver” an even bigger waste of time in hindsight! Regardless, there is yet another decent idea brought up and not explored here, as Ben Lockwood takes his son, George through the White House to give him a view of supposed change and forward movement for America, only to be blocked by a senator that won’t vote for the repeal. Lockwood also finds that his Agent Liberty rhetoric doesn’t work at all in civilized government channels, leaving him up a creek in terms of enacting the change he wants for the country. This hit home all the more effectively when we recall the recent revelation that Lockwood is essentially just a political patsy for Lex, who is still very much at large and unchecked at this point.

Again though, the resistance to Lockwood’s Alien Amnesty Act repeal ends up being pointless, because the senator just gets blackmailed off-screen, allowing the repeal to go through. Seriously? Is Supergirl even trying to create believable, meaningful obstacles for its characters anymore?! Whatever. I guess this is a fair enough excuse to continue tying Red Daughter into the ongoing season storyline anyway, since the repeal results in Supergirl being pinned to a wall with the Lex-O-Suit, courtesy of Eve, before Red Daughter dresses up as Supergirl and heat visions most of the Presidential cabinet to death, leaving the White House in flames, before flying off, saying that the world should fear the power of Supergirl. This naturally has President Baker declaring Supergirl to be Public Enemy Number One, with the episode ending as Alex and Lena prepare to clear Supergirl’s name, despite their past differences. 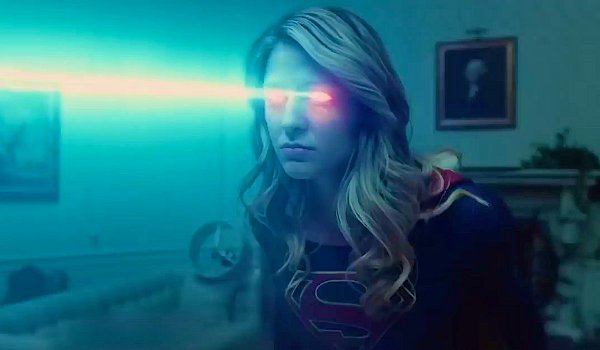 Again, it really would have worked best if Alex and Lena weren’t immediately rearing to help Supergirl redeem herself, after so much time resenting her and what she represents, but the real tragedy here is that Eve Tessmacher wasn’t allowed to become a truly interesting or fleshed-out character here, despite the episode being, right from its title, “All About Eve.” Supergirl still suffers far too much from sloppy, lazy writing, which doesn’t bother to flesh out whatever good ideas or intriguing characters are brought to the table, and instead settles for the most aggressively boilerplate, contrived ways to keep the show’s plot moving forward. At least J’onn managed to get a great storyline in this episode, and at least Red Daughter is continuing to meaningfully impact the plot at long last, but, “All About Eve” still ends up feeling like way too much of a missed opportunity. Furthermore, Supergirl followed this by going off the air for several weeks, leaving this latest stumbling block the point before the show’s latest Spring hiatus. At this point, it’s hard not to get checked out of so many storylines this season, even if a worthy threat is finally beginning to surface between Lex Luthor and Red Daughter.

Supergirl 4.17: "All About Eve" Review
Supergirl stumbles again with an acceptable, but disappointingly middling episode that fails to live up to its promise of fleshing out Eve Tessmacher.
THE GOOD STUFF
THE NOT-SO-GOOD STUFF
2019-04-14
72%Overall Score
Reader Rating: (0 Votes)
0%