After so much emotional and dramatic turmoil on The Walking Dead during the previous week, with Alpha leaving the severed heads of ten survivors on a border divide, several of which have had a major presence on the show for many seasons now, the show’s season finale went with a very different conflict, leaving the Whisperers pretty much entirely out of the storyline. “The Storm” brings forth a brand new scenario for the show, only hinted at in passing, namely a devastating Winter storm that the survivors must try and weather together, with the season finale’s storytelling split between the perspectives of The Kingdom and Alexandria.

The perspective of The Kingdom however will never be the same. After the events at the fair, and the loss of so many survivors at Alpha’s hands, The Kingdom has found itself with no way to survive, and the community essentially falls. Ezekiel now has no choice but to lead The Kingdom’s citizens to The Hilltop, where they must join with that community to keep living on. That’s bad enough, and the opening section of Ezekiel and Carol permanently shutting the doors on The Kingdom’s campus is genuinely heartbreaking, but making matters even worse is the aforementioned blizzard. The hazardous weather forces The Kingdom’s people to make a brutal, frigid trek to The Hilltop, though thankfully, Ezekiel’s people apparently have Daryl and Michonne for added support, alongside Lydia. 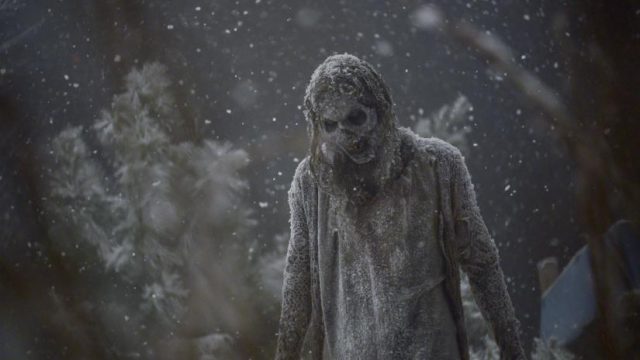 The presence of Daryl and Michonne among The Kingdom’s people explores some interesting storytelling, particularly from Daryl’s angle, as he’s faced with having to take the brunt of Ezekiel’s blame regarding Henry’s death. Ezekiel wants Carol to start anew with him, entirely away from Daryl and that established group, with Carol commenting that Ezekiel only blames Daryl because he can’t afford to blame himself for Henry’s loss. There’s actually a lot of strong drama explored here, between Daryl finding a renewed drive to rejoin with the other survivors, after recognizing his desire to protect Lydia from the Whisperers, and Ezekiel and Carol struggling to move on from the loss of their son, and the loss of their community, which is very cleverly paralleled with a brief respite at the ruined Sanctuary. The hostility between Ezekiel and Daryl doesn’t feel properly earned or explored, since it’s just being awkwardly tossed into the season finale at this point (even if it does make some sense, from a narrative standpoint), but Carol in particular really excels in this episode, caught between one of her closest friends and her husband, as she’s also faced once again with the grief of losing a child.

The trip through the freezing weather also often proves to be very tense and exciting, without needing to rely on the Whisperers as the main obstacle, and instead being punctuated by some really standout moments of environmental hazards and drama. The fact that walkers are constantly buried in the snow, sometimes frozen in plain sight, but often where they’re least expected, makes for a lot of solid, nerve-wracking directing, as The Kingdom’s survivors desperately try to make it across frozen rivers and hidden walkers. The character-driven moments are just as exceptional as well, such as a scene where Lydia almost intentionally dooms herself by attempting to let a walker bite her, with Carol later having to stare down a despair-filled Lydia who is desperate to die, having to ultimately save her and convince her to return to the group. The idea of Lydia being an outcast and a pariah for her mother’s actions is great, but again, it’s not really explored as well as it could have been here. I have a feeling that we’ll probably see this kind of character arc in more detail next season. 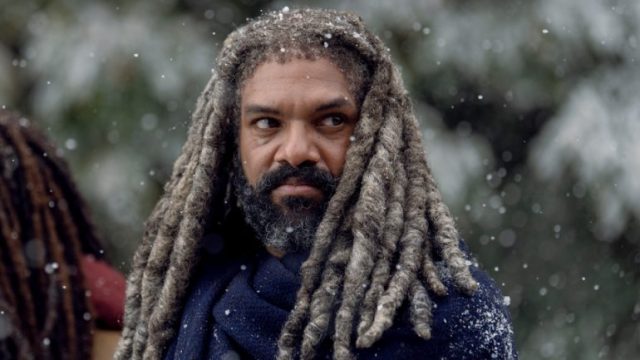 Regarding Alexandria, the scenes here were often even better, particularly when Gabriel, Eugene, Siddiq and Rosita must all hole up in one of the houses with Judith, and are forced to take Negan out of prison to keep him alive. Yeah, I’m not sure what idiot decided to put Rosita’s love, “Quadrangle” all in the same building during a blizzard, but whatever, I guess it’s narratively convenient. Negan of course doesn’t waste the opportunity to be the big blowhard that he is, jeering at Rosita and her suitors with proud abandon, and it initially appears as if he’s going to be a giant nuisance to Alexandria’s survivors, particularly Rosita and Gabriel. Mercifully though, the episode doesn’t go that route, instead forcing an excuse to get the survivors outside after a fireplace explodes, making them brave the horrible blizzard to try and get to Aaron’s house. I suppose that’s better than having to trek all the way from The Kingdom.

The big highlight here, if you suspend your disbelief a bit, is the point where Judith runs off when she hears Dog, who just so happens to be wandering around aimlessly during the blizzard. Um, what? First of all, how did Dog get lost in Alexandria in the first place? It’s a closed community, and I seriously doubt that Judith was the only person looking after him. Second, I get that Judith is a child, but even then, she’s supposed to be a very smart child. Would she seriously run off in the middle of a blizzard, with no visibility, just because she hears Dog? It’s a bit of a stretch in some respects, but it does make for a surprisingly heroic moment for Negan, who charges after her, risking his own life, and even getting injured in the process. Negan does successfully save both Judith and Dog, and brings them back to the other Alexandrians as well, earning some begrudging respect from Michonne at the end of the episode. Does this mean that Negan may finally be integrated into Alexandria’s citizenry properly next season? I don’t know if one selfless act will be enough, but I do like how the show is continuing to flirt with the idea of redemption for Negan, who has found genuine rehabilitation during his prison time, or so it appears.

It initially seems that The Kingdom’s survivors also happened to completely get away with passing through Alpha’s territory, the only way to survive the rest of the walk to Hilltop, without consequences, though Alpha ordering Beta to whip her with a branch, to make her strong for, “What comes next”, would certainly suggest that the Whisperers will continue to very much be a threat on The Walking Dead next season. Despite not relying on the Whisperers to create most of its danger, “The Storm” managed to be a very different, but still engaging season finale for The Walking Dead. Season Nine’s frequently bizarre story structure once again creeps in here, since some interesting character developments don’t really have enough room to be properly realized in this season finale, but the many tense and exciting moments with the big blizzard still made the handful of head-scratching story elements well worth putting up with. With The Kingdom having fallen, Carol ‘divorcing’ Ezekiel, Daryl possibly rejoining Alexandria alongside Lydia, Negan proving that he’s changed to at least Michonne, and Alpha once again preparing for more violence, there’s a lot of promising story developments to look forward to next season, thankfully suggesting that the show’s renewed creative spark under new showrunner, Angela Kang will hopefully continue to burn in Season Ten!