There’s been a lot of buildup to The Kingdom’s fair, which will make or break the community’s survival, and with Alpha making one last-ditch effort to take back Lydia, there’s certainly a lot to take in during Season Nine’s penultimate episode of The Walking Dead. Don’t be fooled by the name either. “The Calm Before” may spend most of its runtime full of merriment, optimism and a sense of rising accomplishment, but it eventually gives way to a conclusion so full of despair and horror that it sets the stage for a truly crushing season finale the following week!

The way that this episode plays with emotions is truly sublime, and the final execution of the grand, disturbing curveball at the end, a stomach-turning moment ripped straight from the source comics, is utterly fantastic for the most part. The tension kicks up right from the beginning too, with an inspired cold open that shows Alpha attacking one of the caravans from Hilltop, and cutting off the scalp of a woman named Hilda, one of the Hilltop citizens, to some unknown end. Turns out, this is so Alpha can wander around the fair disguised as Hilda, even interacting with Ezekiel at one point! This is kind of a cool idea, though admittedly, it’s the one part of the episode that really doesn’t hold up to scrutiny. Is there seriously no other Hilltop citizen at the fair that knows Hilda? Is no one suspicious of the way Alpha is acting or talking, when she’s so obviously shady and unnatural?! It’d be one thing if Alpha was a good, charismatic actor, but she’s not, at all! How the hell did no one, Ezekiel and Tara especially, notice that Alpha was there?! 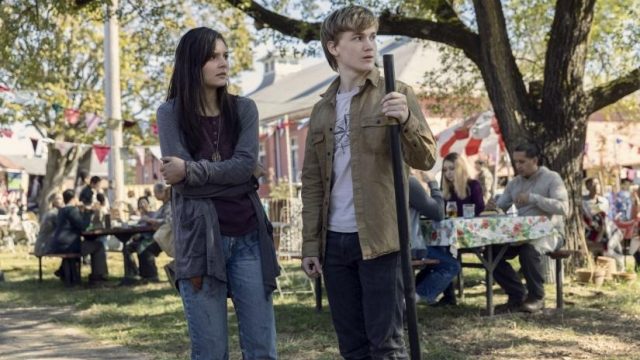 Outside of that gripe however, much of the episode focusing on happiness and victory was great. The communities end up signing the charter as originally intended, after Michonne tells the other leaders that Alexandria is finally ready to re-join with them, and the four major survivor colonies forming a mutual protection pact before signing the charter is a well-earned emotional moment that has been nicely built up all season. The projector bulb that Ezekiel, Carol, Jerry and Diane worked so hard to get also finally allows the fair to watch movies together, as intended, with Lydia being among the theatre patrons, having been granted asylum in Alexandria. It’s almost hard to believe that the show would have any conflict left for the season finale, if one tries to forget the fact that Alpha is still looking for Lydia.

The biggest surprise of the episode however eventually occurs when Daryl, Yumiko, Carol and Michonne decide to splinter off from The Kingdom and make contact with the Highwaymen, who tip them off about the Hilltop citizens that Alpha has killed. I guess the Highwaymen fell down on the job with that caravan, but whatever. At least the news of Alpha being at the fair was heard by someone, even if they’re justifiably too far out to get word back to The Kingdom. The four soon after being surrounded by Whisperers, and Daryl getting forced at gunpoint to an overlook that shows a massive herd of walkers being led around by Whisperers, also effectively began to set up the final turn of the episode, one complemented by Alpha finally having to let her daughter go, after she corners Lydia at the fair, and Lydia refuses to rejoin the Whisperers. Alpha going through that one moment of weakness, even killing a Whisperer that happened to accidentally witness her briefly crying over the loss of her daughter, felt like the last shred of her humanity melting away, officially leaving nothing but the animal that we’ve come to mostly see her as.

This was fully driven home when Alpha tells Daryl that a border between the Whisperers’ land and the communities’ land has now been marked, and Daryl’s party will recognize the barrier when they see it. When Daryl’s party then goes toward a hill and notices ten large stakes placed upon it, we merely see them react in anguish and horror at first, before it becomes apparent that the stakes have walker heads on them, walker heads taken from ten recognizable characters on the show! This is arguably the biggest moment of brutality and terror inflicted by Alpha in the source comics, and to see the TV series adapt it so proudly, mercilessly cutting down ten survivors off-screen in such a shocking, unexpected fashion, perfectly captured the same level of shock and despair from the printed panels, while firmly cementing Alpha as a dangerous force of nature that seemingly can’t be stopped.

While the stakes have ten heads, just like in the comics, and they’re displayed for the same function of dividing a land border decided by Alpha, the victims in the TV show are obviously different than Alpha’s victims from the comics. Several of the comics’ heads come from characters that don’t exist in the TV series, while the TV series has also established several different characters that don’t exist in the comics. The only TV death that’s fully consistent with the comics here is that of Tammy Rose, who died the exact same way and for the exact same reasons as she did in the comics. The way that the episode keeps cutting between each head, one-by-one, showing concerned survivors at the fair looking for the missing victims, is also a stroke of brilliance, and another of the best moments of Season Nine, albeit also one of the most difficult and emotionally horrifying to watch.

Granted, only about half of the heads are probably going to elicit much of a reaction. I doubt anyone will shed a tear for Ozzy, Alek and D.J., who were only recently established on the show a couple of weeks ago, and didn’t really have time to endear themselves to the audience much, beyond the Highwaymen gimmick. Addy and Rodney were also so unlikable that it’s tough to care about their death either, with their heads only being placed to fill out stakes from characters like Carson, Oscar and Erin from the comics, who don’t seem to exist in the TV series’ canon. Even Tammy Rose didn’t ultimately have that much of a presence on the show, and this was as good a time as any to off her.

The episode does do a nice job of constantly building up the horror though, starting with the Highwaymen, moving over to the teens, and eventually, the big losses! It was truly a gut punch to see Alden and Luke suddenly looking confused about the absence of Enid at their concert for example, before her re-animated head was suddenly shown on a stake. Even some concerned women looking for Frankie, before the show cuts to her head on a stake, was pretty hard to watch. Arguably the biggest plucking of the audience’s heartstrings however came from the discovery that Tara is among the dead, with the last head being revealed as, shockingly, Henry! This may explain why the show was rushing along his relationship with Lydia, since the writers knew that Henry was doomed, and suddenly leaving Lydia without an emotional anchor right as she’s welcomed into Alexandria really is a tough blow. You can see that the template of the characters is similar to the comics, where you had a few teens, a female love interest, a community leader, a Negan wife, and a few other red shirts among the dead, with Enid substituted for the comics’ Rosita, Tara substituted for the comics’ Ezekiel, Frankie substituted for the comics’ Amber, and Henry substituted for the comics’ Olivia (Olivia did exist in the TV series, but she was killed by Negan two seasons ago), all adding up to a lot of tension, terror and heartbreak.

Apparently, Siddiq was also captured by Alpha to boot, but was left alive to tell the story of watching the Whisperers kill all of those survivors. The moment of Siddiq instead opting to tell a story of how the characters fought and died together protecting each other however, as heroes, believing in the community, added a small tinge of hope to an otherwise heart-wrenching act of terror by Alpha. Honestly though, things still look very bleak. There’s logistical questions regarding exactly how Alpha so efficiently captured and killed all of those survivors at The Kingdom, but the emotion and drama is very real, and this has The Walking Dead entering its season finale on a very strong, emotional note. “The Calm Before” was an excellent blend of uplifting hope and happiness that was rounded off with unbelievable tragedy, standing alongside the previous week’s similarly standout, “Scars” as another superb highlight offering for Season Nine. It’s good to see that Alpha and the Whisperers have injected such a superb spark of creative life back into AMC’s struggling flagship drama series, and with so many losses being felt between The Hilltop and The Kingdom, Winter certainly couldn’t have come at a worse time.