Despite continuing to not be properly available to Canadians at the time of publication, the DC Universe app is nonetheless building momentum in terms of its ‘original series’ projects. The long-anticipated third season of beloved DC animated series, Young Justice ended up being stellar, and while its initial marketing wasn’t universally received well, the app’s debuting live-action series, Titans nonetheless managed to deliver a pretty solid first season. If there’s one must-see series for the fledgling DC Universe app however, albeit one that Canadians must instead consume via Bell Media’s Space Channel and Canada-based streaming service, Crave for the time being, it’s Doom Patrol, a thoroughly bizarre new DC television series that’s nonetheless a gem right out of the gate!

Despite being a spin-off of Titans that takes place in the same small screen universe as DC Universe’s debuting live-action drama series, Doom Patrol nonetheless carves out its own confident niche, standing apart from the extra gritty, but still fairly conventional superhero drama series that inspired it, to instead become a surreal genre hybrid of superhero, drama, comedy and horror flavouring. This eccentric genre blend starts very strong, with a truly superb pilot episode as well, re-introducing the titular characters, after they formerly debuted in a backdoor pilot episode during the first season of Titans. In this case however, Doom Patrol appears to properly unfold long after the events of Titans’ first season, at the very least, with ‘The Chief’, Niles Caulder now being re-cast, and with an additional player being added to the lead characters’ ranks.

Things begin with an establishment for one of the show’s principal antagonists, Eric Morden, a.k.a. Mr. Nobody. A victim of post-WWII experiments by former Nazi’s during the 1940’s, Mr. Nobody exists in a shadow-like form that can slowly drain the sanity of whomever he exists around. It’s a very cool hook, though surprisingly, Mr. Nobody doesn’t actually appear throughout most of this pilot episode. Instead, Morden serves as a narrator that occasionally interjects commentary within various scenes, to start establishing the series’ lead characters in as snarky and dismissive a way as possible. There’s a lot of inspired fourth wall-breaking with Morden as well, who seems to be fully aware that he exists within a superhero TV series, right down to cynically addressing just how over-exposed superhero television has become in the modern era, and how critics will probably hate this very show. There’s irony there, since Doom Patrol has actually been very critically acclaimed so far, and for good reason!

Another inspired hook in this pilot is utilizing perhaps the most relatably humanized member of the titular team, Cliff Steele, a.k.a. Robotman, to serve as the main audience surrogate for the gradual entrance into the Doom Patrol’s twisted world. A formerly successful racecar driver during the 1980’s, one who proudly cheats on his wife, Cliff is involved in a terrible accident that damages every part of his body beyond repair, save for his brain. After being reborn as ‘Robotman’, with his brain placed into a robotic shell that can’t feel anything from the world around it, Cliff is left to try and acclimate himself to his strange new surroundings within The Chief’s ‘Doom Manor’, in turn not getting much help from the manor’s two other current residents, Rita Farr and Larry Trainor. 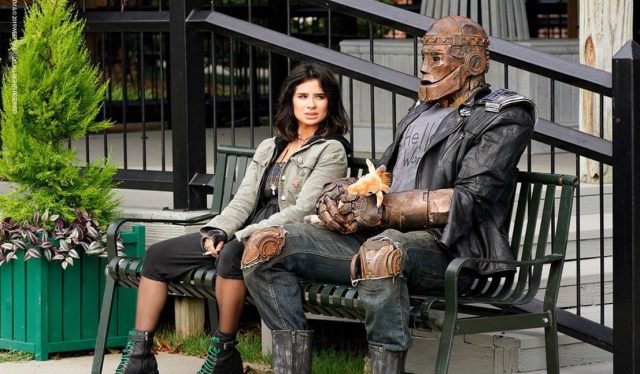 It’s good to see that the show spends time developing just a handful of other characters, rather than going all in on an eccentric band of would-be do-gooders right out of the gate. Many characters have been part of the Doom Patrol in DC Comics lore, but among the two most recognizable, aside from Robotman, are Elasti-Woman (known as ‘Elasti-Girl’ in DC Comics lore, though her name has been changed to ‘Elasti-Woman’ for this show, likely to avoid issues with Disney over owning the character of Elasti-Girl from Pixar’s Incredibles movies), and Negative Man, or, as I mentioned, Rita Farr and Larry Trainor, respectively. Both characters receive their ‘powers’ in accidents that are quickly explained and almost hand waved away, fully embracing the weird, proudly comic book-flavoured conventions of the Titans universe, without being too fussed with the details. There perhaps could have been more time dedicated to certain elements of both characters’ backstories, such as Rita’s diva nature as an actress during the 1950’s, or Larry being a closeted homosexual during the 1960’s, but sadly, Doom Patrol leaves these ideas on the table for now, hopefully to be explored in a future episode.

In the latter portion of the pilot, a fourth member is also added to The Chief’s ‘subjects’, that being Crazy Jane, the one character who wasn’t formerly glimpsed during the Doom Patrol’s backdoor pilot appearance within Titans’ first season. Crazy Jane is also seemingly immortal, for reasons unknown at this point (another weird missed opportunity with the leads’ backstories), but is also established to have sixty-four different split personalities, all of whom display a different superpower. Crazy Jane is also quickly established as the troublemaker in the group, since it’s she that talks everyone into a trip to a nearby town after The Chief briefly steps out, which naturally results in chaos and panic among the citizens. There’s a great sense of hope, melancholy and insanity during this climactic sequence, which naturally ends up drawing the world’s attention, and specifically that of Mr. Nobody, who shows up right at the end of the episode, after Robotman prevents the Doom Patrol from fleeing to a new location. It’s a sharp cliffhanger to end the pilot episode on, and thankfully, the Canadian broadcast of Doom Patrol launched with the second episode airing back-to-back on the Space Channel, before both of the first two episodes of Doom Patrol made it to Crave a few days later.

I can’t stress enough how truly awesome Doom Patrol’s first episode is! If you happen to be an American consumer with access to the DC Universe app (or are at least willing to use a VPN to get around the app’s region-locking), then this show is definitely the best reason to sign up for DC Universe at this point! Doom Patrol is a winning blend of the terrifying and the ridiculous, quickly standing apart from the deluge of DC dramas that are currently clogging the small screen, and standing above the majority of current small screen superhero dramas in general! The lead ensemble in particular is as lovable as they are eccentric, and what results is another Titans-flavoured superhero family drama with extra adult grit and snark behind it, though one that also elevates itself on even more unique charm than Titans has currently managed to. The best part is that I can only see this show becoming weirder and more wonderful in the weeks ahead, and that has me incredibly excited for what’s next!