Cloak & Dagger quickly soared to becoming one of the best current shows on Freeform during its standout first season last Summer, and fortunately, the show is returning for its sophomore season a little earlier in 2019, this time in Spring. “Restless Energy” picks up shortly after the life-altering events of the first season finale, which saw Tandy and Tyrone saving the city from an explosion of Darkforce, and taking down the corrupt individuals at Roxxon in the process. The fallout of saving New Orleans is definitely felt however, particularly for Tyrone, who must now live in Tandy’s old church hideaway, since Connors is MIA, and Tyrone is still wanted by the NOPD for the murder he was framed for.

Cloak & Dagger’s second season premiere maintains the strong dramatic momentum that the first season delivered so effectively, teasing a new threat that’s beginning to creep out from the shadows, while also spotlighting how Tandy and Tyrone have somewhat swapped lives, after saving New Orleans from Roxxon. Now, it’s Tyrone that’s become the lonely outcast, and Tandy that’s beginning to live the charmed family life, gradually repairing her relationship with her mother, while also resuming her ballet classes. At the same time, both of the show’s leads begin trying to develop their powers to a greater degree, finding separate outlets through which to work as vigilantes in the city.

The fact that Tyrone and Tandy are now especially interested in pursuing their Marvel superhero identities as Cloak and Dagger, respectively leaves Cloak & Dagger in a prime position to start feeling a bit more like a comic book drama in its second season, rather than the approach of a teen drama that happens to star people with superpowers, as the first season aimed to deliver. Tyrone has begun stealing money and drugs from gangs around New Orleans, in an effort to help O’Reilly, who is still recovering from Fuchs’ death last season. At the same time, Tandy begins hearing stories of denial from abused women in hers and her mother’s domestic abuse support group, and decides that she wants to start doing something about it. This provides a way to keep the two characters’ stories running parallel, while still giving them distinct character arcs, leaving Cloak & Dagger still standing strong, with plenty of dramatic momentum to spare at this point.

What’s also effectively explored is how Tandy and Tyrone want to do good, but their youth and inexperience often leads to them inadvertently making bad situations worse. Tyrone’s efforts end up messing up O’Reilly’s busts, for example, with O’Reilly telling Tyrone to stay out of the gangs, since their operations can only be truly wrapped up when they get confessions from the higher-ups. Tandy’s efforts to intimidate the abusive boyfriend of one of her group members meanwhile just leads to the domestic situation getting worse, since the boyfriend lies about Tandy’s intimidation, and the wife simply doubles down on the relationship, after seeing the boyfriend become scared and vulnerable. Tandy’s surprising struggle makes a lot of sense, though honestly, O’Reilly probably should know better than tipping off Tyrone about gang operations, since she’s begging him to interfere in them, knowing his history, and the fact that he has nothing to lose. Besides, if Tyrone can teleport, and is learning to do so effectively, then why does O’Reilly feel the need to warn him about gangs being nearby in the first place?

Naturally, Tandy and Tyrone also find their latest opportunity to butt heads after Tyrone’s latest botched gang heist, namely when Tandy has to bail Tyrone out of a jam, in turn realizing that he’s been lying about his nighttime activities. This does lead the two to come together and realize that they’re acting out against criminals and abusers as a means of trying to cope with their shared family losses though, providing a nicely human dimension to the two teens’ fledgling superhero activities. When Tyrone asks Tandy for help in getting the crime boss confession that O’Reilly needs to wrap up her big drug bust as well, the two decide to go to a club together, with Tandy getting Tyrone inside, presumably with her abilities. Is no one noticing Tyrone hanging around, by the way? Something tells me that a wanted criminal hanging out in an extremely public place for an extended period of time is a very bad idea, and you’d think that Tyrone would be smart enough to figure that out!

Despite the needlessly risky plan of just bumbling around a club until Tyrone can record a confession however, the two teens catch sight of a gang member being thrown against a glass window, and rush headlong into the danger as a result. Yes, that’s very stupid, but I suppose these two are upstart teenagers, so it does fit with their characters. In any case, Tandy and Tyrone are shocked to discover that every single gang member that they were trying to record has been slaughtered by some unknown assailant, which is where the episode ends. This is almost certainly O’Reilly, whom Marvel Comics fans would know becomes the vigilante, Mayhem in the printed panels. Hell, we already know that O’Reilly is doomed to become Mayhem on this very show this season, after the marketing pretty much entirely centered around her transformation into her vigilante alter-ego, following O’Reilly getting a face full of Darkforce during the first season finale. Considering that O’Reilly is still lecturing Tyrone about proper police procedure, I imagine that her Mayhem side is something of a split personality that she can’t control, but I suppose we’ll have to see how Cloak & Dagger plans to illustrate this violent new side of O’Reilly’s character. 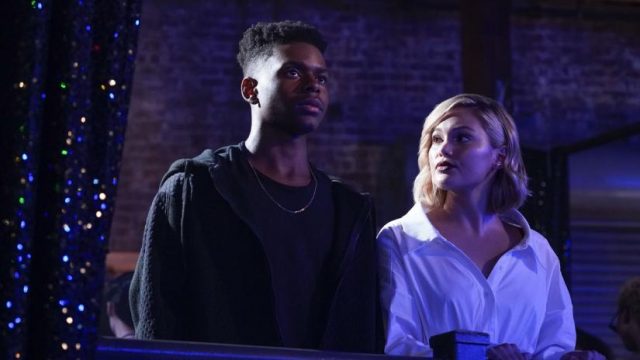 “Restless Energy” nicely elevates the heroic journey of Tandy’s and Tyrone’s characters, while also effectively finding ways to invert their respective situations from the first season. This is especially effective when we see all that Tyrone has had to lose, as he spies on his family and Evita from the shadows, never being noticed all the while. Tandy, meanwhile, is flourishing thanks to her renewed drive to succeed, and her renewed relationship with her mother, even if she’s having just as hard of a time crafting a superhero identity as Tyrone currently is. The real question however is how Tandy and Tyrone will be affected by O’Reilly’s violent transformation into Mayhem, which the end of the episode sets the stage for pretty exceptionally. With both Tandy and Tyrone bearing witness to Mayhem’s first mass murder, it’s equally likely that Mayhem could become a brutal ally, or an unyielding enemy, in the episodes to come. If Mayhem’s methods prove to be truly effective in a way that Cloak and Dagger just can’t manage as well, is it going to be worth preserving any of O’Reilly in the end?