After concluding its Spring hiatus, Arrow returns to spotlight the fallout of Emiko destroying Laurel’s career as Star City’s D.A. “Lost Canary” has Laurel returning to her Black Siren identity, resuming her old criminal ways alongside a former running mate from her Ricardo Diaz association. At the same time, Felicity and Dinah both pursue Laurel, with divided opinions on whether she can still be redeemed after the upheaval that she’s been hit with, while Oliver and Diggle try to follow a lead that could also redeem Emiko, and hopefully turn her against the Ninth Circle.

After riding high with, “Inheritance” right before its Spring hiatus, Arrow thankfully remains strong with, “Lost Canary”, which delivers a standout storyline for the show’s female leads, ironically mirroring the female-driven core story strategy of the latest Legends of Tomorrow episode during the previous hour. The question of Laurel’s ultimate morality is nicely propped up throughout the episode, with the inspired device of Dinah wanting to bring Laurel down, while Felicity wants to turn her back to being one of the good guys, also providing lots of effective drama and character debate. This wonderfully played into how Laurel has influenced both Felicity and Dinah throughout this season especially, with Felicity wanting to pull Laurel back from the edge, just as she did for Felicity while Oliver was in prison, while Dinah’s duties to the SCPD, and scars from the death of Vincent, drive her to do whatever it takes to bring Laurel to justice. 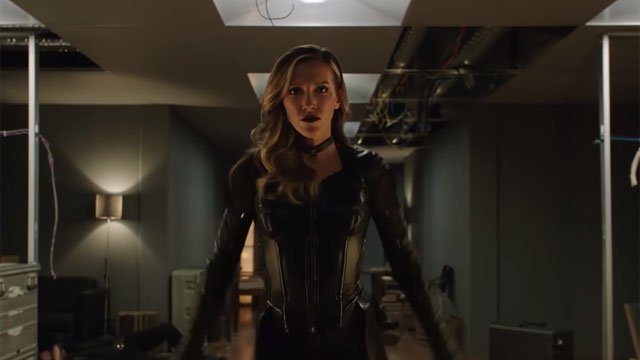 There’s also a very cool, unexpected cherry on top to really let this storyline soar; Sara Lance temporarily returns to Star City, to assist with apprehending Laurel! Since being one of the lead characters on Legends of Tomorrow for four seasons now, this is the first proper go-around for Sara’s White Canary identity on Arrow (if you don’t count crossover episodes), and it certainly doesn’t disappoint, as Sara remains a force to be reckoned with, particularly now that she’s taking a break from her many super-powered Legends comrades! After so much time seeing her on Legends of Tomorrow, with its more fantastical time travel-themed storylines, it’s easy to forget Sara’s sheer physicality and lethal skill as a hand-to-hand fighter, and it’s awesome to see her tear it up with Dinah in particular during this episode’s handful of well-done action scenes!

Serving as the metaphorical devil in Laurel’s ear all the while is Shadow Thief, a former Mossad agent-turned-burglar, who is adapted from the modern post-New 52 female incarnation of Shadow Thief from DC Comics lore. Shadow Thief is not only a cool antagonist for this episode, but also provides a nice way to keep Laurel’s morality hanging in the balance. It would have been ideal if Laurel wasn’t ultimately talked down from her heists and renewed criminality by yet another cheesy pep talk from the girls, but her other interactions nicely make up for this. Laurel’s interactions with Sara are especially fantastic, with Sara rightly pointing out how she’s had to redeem herself, and fight her own checkered past as Oliver’s former illicit lover, and her time as a trained killer for the League of Assassins. Sara’s and Laurel’s final scene together at Quentin Lance’s grave nicely punctuates Laurel deciding to return to Earth-2, in order to work at properly redeeming herself, which likely also signals Katie Cassidy-Rodgers’ second exit from the show at this point. Still, if this is indeed the last we see of Black Siren during Arrow’s proper events, then at least she concluded her story arc on a superb note!

Oliver and Diggle were mostly pushed into the background in this episode, but they still had a solid subplot to enjoy, even with Rene being entirely absent this week. After Felicity digs up intel about who killed Emiko’s mother, Oliver and Diggle go to an apartment to look for clues, only to discover that it’s owned by Kodiak, one of the Longbow Hunters! After subduing Kodiak and getting him to confess to the killing, albeit without knowing who hired him, Diggle puts together that Dante is the one behind Emiko’s mother’s murder, and that this intel should be enough to turn Emiko against the Ninth Circle! The dramatic irony is that Emiko is supposedly the leader of the Ninth Circle, which Oliver and Diggle don’t know, and this could present an issue if they’re trying to bring her back to the side of the heroes, as the women successfully do with Laurel. We’ll just have to see if the plan to redeem Emiko works, and whether it’s ultimately Emiko or Dante who becomes the head of the serpent for Team Arrow’s inevitable climactic duel with the Ninth Circle at the end of this season.

The flash-forwards return in this episode too, though they sadly once again felt like a weak link in the storytelling. Mia and Zoe have to try and flee from a Galaxy One-enhanced, vigilante-hunting super-soldier, who has also been cutting a swath of bodies through the Canaries to boot. This builds off of the foreshadowing between Kevin Dale and Rene at the end of, “Star City 2040”, wherein Dale hints that he has a way to end the Canaries once and for all. After Mia refuses a role in the Canaries to Dinah soon after escaping her pursuer, and tries to flee to work alone, she ends up being cornered by the super-soldier, who has also incapacitated Connor! Fortunately, despite Mia being in over her head, the super-soldier is subdued by Laurel, who has apparently become part of the Canaries in the future, meaning that at some point in the decades ahead, she does return to Earth-1, and reunite with Dinah. This final moment nicely and poignantly confirms that Laurel will see Team Arrow again in the future, but every other element of the flash-forwards felt uninteresting in this episode, which is a bummer.

Overall though, “Lost Canary” is keeping Arrow very strong, perfectly capping off the ongoing Laurel/Black Siren arc that has played a big part this season, while continuing to do just enough to keep moving the core conflict against the Ninth Circle forward. The flash-forwards once again merely existed to take up space in this case, despite that sweet payoff with Laurel in the future, but seeing Dinah and Felicity come together to bring Laurel back to the good guys, even if Shadow Thief ultimately gets away for now, made for an episode that was very strong in terms of both action and drama. This was all the more true with Arrow taking the clever opportunity to temporarily bring Sara Lance back over from Legends of Tomorrow, highlighting Sara’s own journey of redemption, and using it as a way to further reach out to her sister’s Earth-2 doppelganger. It would appear that Black Siren is now completely a force of the past on Arrow, but fortunately, Oliver’s and Diggle’s decisive intel against Dante should give us another promising battle against the Ninth Circle to look forward to in the next episode.