Legends of Tomorrow has really been indulging quite a few love stories this season, and love definitely seemed to be in the air during, “Seance and Sensibility.” A duo of storylines separated the show’s male and female leads, while another subplot of sorts unfolds with Ray, after he makes contact with a frightened and desperate Nora, and smuggles her aboard the Waverider. There’s some fun ideas at play with the latest Fugitive as well, which occupies the women, while most of the men (save for Ray) stay behind in the present to be there for Nate during Hank’s wake.

The foundation of this particular Legends of Tomorrow episode is overall good, but unfortunately, its especially heavy emphasis on the show’s increasingly tedious romances frequently drags the storytelling down, despite the episode’s really fun Fugitive angle. Even the time period makes for an enjoyable hook in this episode, with the Legends’ female members taking off to 1802, after beloved romance novelist, Jane Austen’s books disappear from existence. It turns out that this allegedly happens as a result of a mysterious, “Lust outbreak” at a wedding that Austen attends, the second wedding wherein such an event occurs, which appears to be tied to whichever Fugitive is hiding out in that time period. It’s funny, it’s racy, and it makes for a great mystery for the Legends!

This is why it’s so frustrating that the show has been spending so much time forcing love stories that really don’t seem to be working in many instances. The whole budding Nate/Zari romance still feels like it’s coming out of nowhere, as if the writers just wanted to give Zari a love interest, and decided that Nate was as good a pick as any. This problematic Nate/Zari romance only becomes more of an issue when so much attention is placed on it as well, with the characters suddenly grilling Zari about being cynical, and never taking a chance on love. It just feels a little too cheesy, even by Legends of Tomorrow standards. Truth be told, it probably would have been more interesting if the love-inducing Fugitive simply became a temporary romantic interest for Zari here, that being Kamadeva, the Hindu god of love, who is disguised as a coachman for a repugnant noble.

Kamadeva, or Sanjay, who it turns out is is simply an avatar wielding the powers of Kamadeva after the god was immolated by Shiva thousands of years ago, per Hindu lore, begins developing something of a fixation on Zari, who is the first woman in eons to resist his charms. After so much pressure on Zari to begin embracing her romantic side, she agrees to fall under the influence of Kamadeva’s love dust, which gives all of the women on the team a fun romantic dream to each enjoy at an earlier point, while Ray is also finally motivated to make a move on Nora. This all culminates in a surprisingly fun and funny Bollywood-satirizing musical sequence, though naturally, Zari doesn’t end up marrying Sanjay/Kamadeva, particularly after she learns that he has a thousand wives. This Bollywood sequence is very amusing in its over-the-top choreography, and it’s sure to be a highlight moment for Legends of Tomorrow’s current season, but I really wish it was attached to a better storyline. The fact that Zari is inexplicably attracted to Nate all of a sudden only hurts the potential of this delightfully weird storyline even more. 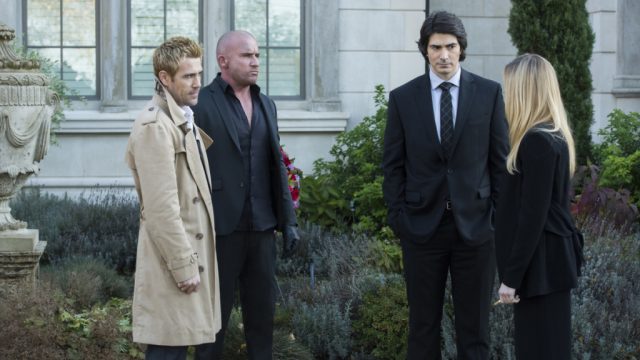 Unfortunately, the episode not only spends a lot of time leaning on Zari’s uninteresting love life to move its story forward, but also Mona’s increasingly tired romance with the late Konane to boot. After Mona dreams of Konane as a result of Kamadeva’s love dust, she becomes enraged after a confrontation with Zari regarding their different romantic views, leading to Mona transforming into Wolfie, and going after Jane Austen. Zari’s completely correct when she says that Konane wasn’t really around long enough to endear himself to the audience, or to anyone aside from the lovesick Mona, so Mona’s anguish just feels too overdone. Moreover, Austen deciding to stop writing seemingly has nothing to do with Kamadeva in the end. She simply decides to stop writing, then Mona tells her to keep writing, and that’s it. Seriously? Legends of Tomorrow brings in Jane Austen, arguably the most celebrated romance novelist of all time, and this is the best the show could do with her? That’s pretty lame. I could only imagine how Mick especially might have really bolstered this storyline if he were allowed to interact with Jane Austen, considering his alter-ego as Rebecca Silver, but the show completely misses that opportunity, and that’s frustrating.

Fortunately, the storyline with the male members of the team at the Heywood estate generally goes better, even if it also has a few head-scratching turns. Apparently, the Heywood house is built upon a sensitive spiritual area, which is pretty convenient, since Hank’s spirit is trying to linger, so he can pass a message to Nate. Nate is of course angry at the truth behind who his father seemingly was, going as far as to reject the opportunity to make a nice toast about his father at the wake, despite Constantine trying to warn Nate that Hank’s spirit needs to talk to him. Once Constantine manages to temporarily hold Hank’s spirit in Mick’s body however, he begins to learn about Hank making a deal with a demon, which is of course, Neron. At the same time, Nate discovers that his father was actually trying to capture magical creatures so that he could build a theme park that Nate wanted as a child. This is a little sweet, but it feels like all of the claims about Hank being a whimsical person just ring hollow, considering his actions and personality since the show first established him. Hank never gave any indication that this was true, so Nate’s final bittersweet moments with his father’s body don’t land with the emotion that they could have. 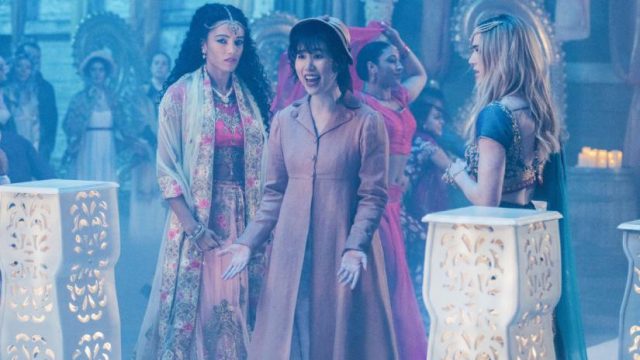 At least Neron finally revealing himself to Constantine, in Desmond’s guise, during the final seconds of the episode, presents promise for the weeks ahead. Sadly though, “Seance and Sensibility” feels like a bust of an episode for Legends of Tomorrow, and that’s a shame. The episode’s ambitious storytelling just doesn’t have worthwhile romances or emotional arcs to work with, making it all feel like the otherwise fun scenarios don’t effectively land. The Bollywood-style musical number is definitely the big highlight, but this moment having to be anchored around the romantically confused Zari hurts its narrative potential. The show is really starting to spend too much time on love stories that just aren’t effectively working, and it should probably give it a rest. Thankfully, Constantine finally confronting Neron should hopefully give the Legends something better to do than whine about their love lives soon.