It’s finally come down to the final handful of episodes for HBO’s flagship fantasy drama. After taking an extra year off the air, Game of Thrones has returned at long last for its final season, spanning six episodes that will eventually decide the ultimate fate of the Seven Kingdoms. In the season premiere however, the series primarily focuses on laying the foundation for future events at Winterfell, as Jon returns home alongside Daenerys and the Unsullied, finally achieving that long-awaited reunion with his surviving siblings. At the same time, Euron continues to try and woo Cersei at King’s Landing, while Yara remains his prisoner.

There’s quite a bit to unpack as we head into Game of Thrones’ final handful of episodes. On that note, some may be disappointed that the show doesn’t manage to achieve much forward momentum in its season premiere. The character drama remains outstanding, as usual for the show, but it’s very evident that there’s a lot of pieces to arrange as the final season begins, which comes at the expense of faster pacing. This is fine, and even prudent in many respects, but, “Winterfell” also ends up being a noticeably drier season premiere than Game of Thrones usually delivers, with no sign of the Night King at this point (outside of some remains at one of the Northern locations), and no real action. 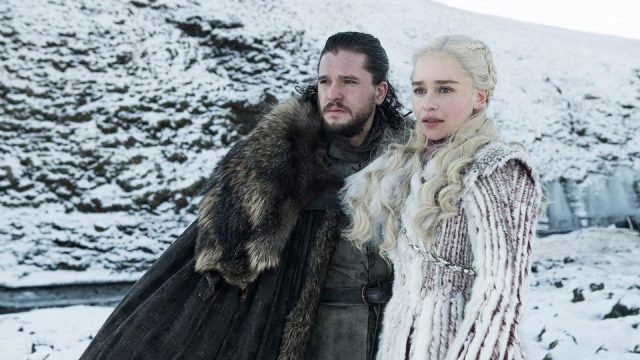 Easily the biggest draw of this season premiere is the long-awaited reunion between Jon and the surviving Stark siblings. Arya, Sansa and Bran have already made it to Winterfell as of the end of last season, but finally, Jon joins them, tragically after there’s no longer a Wall or a Night’s Watch to go back to. Inevitably, not all of the Stark siblings take to Daenerys right away, most notably Sansa, who notices that Daenerys is staking claim to the Iron Throne, and that Jon effectively gave up his title in the North, right as the White Walkers are beginning to march towards Winterfell. Sansa became a biting presence to great effect in this episode, with Arya and Bran actually being the softer, more loving perspectives on Jon’s return, and this worked very well. Equally effective was Sansa’s reunion with Tyrion, as the two reflect on their former marriage and time at King’s Landing, complete with referencing Sansa fleeing the city shortly after Joffrey’s death.

The air of homecoming is comforting, if slow-paced, and there are nice character moments that effectively foreshadow things to come. The highlight among these is Jon riding Rhaegal alongside Daenerys upon Drogon, with only a small bit of dodgy CGI disturbing what’s otherwise a genuinely sweet and uplifting moment, as Jon begins to grow closer to learning the truth about his true heritage. This does get spilled to him in this episode as well, since Daenerys eventually tells Sam about executing his father and brother, with Sam then tipping Jon off to the fact that he’s actually Aegon Targaryen, including the fact that Ned hid Jon from Robert Baratheon so many years ago, since Jon is the true heir to the Iron Throne. This truth coming out is also effectively timed with Varys, Davos and Tyrion all debating whether it’s prudent to arrange a marriage between Jon and Daenerys. Jon finally learning the truth about his lineage once again presents one of the biggest questions behind Game of Thrones’ final season, and we’ll have to see if this revelation ends up drastically affecting his relationship with Daenerys. Somethings tells me that it certainly will!

Even with most of the episode unfolding at Winterfell, true to this season premiere’s title, we did get a brief peek at a couple of other locations. Chief among these was King’s Landing, where Euron has brought Cersei the Iron Fleet, leading to a begrudging Cersei finally taking him to bed. Fortunately, Theon does manage to make his way to Yara and free her around the same time, with Yara claiming that the Iron Islands must be secured, in case Winterfell falls, and Daenerys needs somewhere to flee. At the same time, Qyburn arms Bronn with a crossbow, insisting that he assassinate Jaime and Tyrion if they survive the war against the White Walkers, in order to eliminate the last of Cersei’s dissenters within House Lannister. Bronn’s pre-existing friendship with both Jaime and Tyrion makes this a nicely challenging moment, since Bronn has a long history as a sellsword, but not one completely without loyalty to his friends. Cersei can no doubt reward Bronn handsomely, effectively setting him up for life, but what will truly matter most to Bronn in the end?

The other location that this season premiere briefly jumps over to is Last Hearth, where the young Ned Umber is sent to try and rally his troops, after Sansa lends him extra supplies. It’s here we see that Tormund and Beric survived the fall of Eastwatch (likely surprising no one), with the two of them both poking around Last Hearth at the same time, and running into Edd. The men discover that Last Hearth has already been pillaged by the dead, with Ned Umber being pinned to a wall, surrounded by severed limbs. Ned re-animates right as the men are talking about needing to make it back to Wintefell to boot, forcing Beric to burn him with a flaming sword. This was the one moment in the episode that smacked a little of cheesiness. I get that the dead marching to Winterfell is a big deal, but when did the Night King suddenly become a macabre artist? Moreover, would Ned seriously re-animate like that, right when it creates a convenient jump scare? It just felt like a little much for Game of Thrones, a series that is normally so excellently written that it doesn’t need to rely on these dumb parlour tricks. 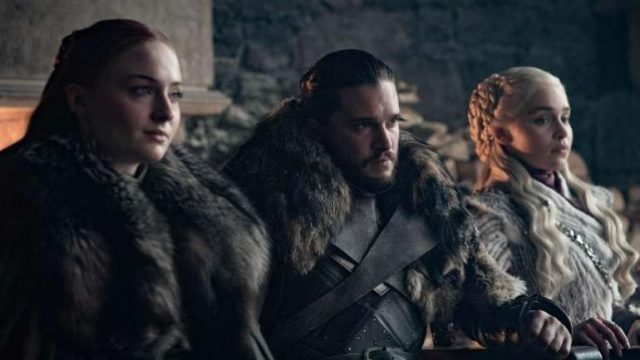 Fortunately, even though this episode has some dry spots, and even though it’s a little sluggish at times, “Winterfell” nonetheless effectively sets the stage for what’s to come throughout Game of Thrones’ final season. Jon’s reunion with the Stark siblings presents a variety of great perspectives on the war to come, and is also well-timed with Sam telling Jon the truth about his actual parentage. At the same time, Cersei preparing to secure her own dominion, despite Tyrion believing that she will help the North in the fight against the White Walkers, creates tons of dramatic promise, especially with the possibility of Bronn being bribed to assassinate Cersei’s brothers. Jaime is definitely still kicking as well, with the episode ending as he re-enters Winterfell, and happens to see Bran waiting for him. It feels like ages since Jaime first pushed Bran out of the tower, leaving him crippled in the series premiere, all the way back in 2011. It will be interesting to see if Bran is at all bitter about Jaime rendering him paralyzed so many years ago, though I doubt it will take priority, with the Night King drawing ever nearer. It’s anyone’s guess as to when the dead will finally reach Winterfell, but clearly, the surviving Northerners are going to be in for the fight of their lives when they do, something that this season premiere made painfully and wonderfully apparent!