Supergirl returns from its Spring hiatus after a pretty decent twist in its prior episode, following Red Daughter framing Supergirl for an attack on the White House. “Crime and Punishment” explores the fallout of these actions, with Supergirl suddenly declared to be Public Enemy Number One in the U.S., resulting in Kara having to investigate Lex’s prison with Lena in order to find any clues that might exonerate her. At the same time, Alex tries to keep the heat off of Supergirl after Ben Lockwood comes to the DEO, demanding that they turn over any intel on her location.

Overall, “Crime and Punishment” makes for a better Supergirl episode than usual, since it does find a few smart ways to play with the idea that Supergirl has now been ostracized by the public in an instant, despite years of trying to help people and make a difference in the world. There’s legitimate, believable fallout to the public unrest resulting from Red Daughter’s attack on the White House, which once again provides an interesting way to disarm Kara’s Supergirl identity, and force her to think outside the box. Of course, it would have been ideal if Kara’s character didn’t once again take this latest opportunity to be as whiny and put upon as possible. Lena even has to tell Supergirl to, “Be strong” while she’s taunted by prisoners after they both enter the prison. Yeah, a member of the Superman Family really shouldn’t be this thin-skinned. Needless to say, it’s not very inspiring.

Fortunately, even if it’s a little outlandish, Lena constantly diving ever further into Lex’s writings and clues, finding gradual ways forward amid a sea of her brother’s obsession and madness, is significantly more rewarding. Lex has been very busy as well, since he’s apparently constructed an entire secret room in his prison cell (even by Lex Luthor’s standards, I have to wonder how the hell he did this!), which is conveniently activated when Lena presses the area of Lex’s Everest carving where he originally promised to build Lena a home to keep her safe, back when Lex and Lena were children. Going down the rabbit hole with Lex is pretty great here, especially when we can so clearly see Lena pushing through an incredible toll of emotions in order to exonerate a superhero that she previously never trusted. This speaks very well to Lena’s devotion and strength as a character, providing a rare example of Supergirl representing actual emotional turmoil, and actually challenging a character’s emotions in a legitimately smart way.

Speaking of real emotional turmoil, James also had a pretty interesting subplot to this effect. After continuing to suffer PTSD symptoms in the wake of his shooting, Kelly makes James seek help from a trauma therapist. James having to realistically confront what happened to him, and use realistic coping mechanisms to try and move past it, is an interesting new turn for his character, particularly considering James’ former history as a vigilante. James was often shot at as Guardian, but he was never wounded so efficiently, and confronting his brush with death provides some startlingly real drama to Supergirl. This episode even offers a pretty solid way to work this PTSD struggle into the season’s overall storyline as well, since it’s eventually revealed that James’ PTSD is a result of the Harun-El serum that he was injected with, which is seemingly playing havoc with his senses and mind. This is great, since it ends up suggesting that there will indeed be an unexpected cost to saving James’ life, one that Lex may or may not have planned for. 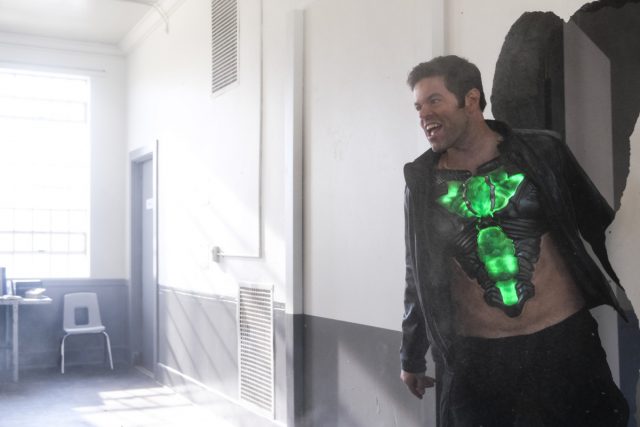 The material at the DEO is pretty decent too, with Alex and Brainy facing interesting conflicts of their own. Alex has to try and convince Haley to defy the chain of command when Lockwood begins demanding that the DEO deliver Supergirl, while Brainy debates whether or not to delete the Alien Registry from the DEO servers, as a means of possibly protecting aliens from Lockwood’s people. Alex’s arc is a little less successful, since it once again relies on Alex unrealistically putting her emotions above her duties, which doesn’t feel true to her character, though I suppose we did need to create a contrast with the very duty-focused Haley. Brainy’s conflict meanwhile was actually fantastic in a lot of ways, particularly when he demands that Nia help him find an answer to a strategy with an exact 50/50 chance of success and failure. When Nia pretends to dream that Brainy doesn’t delete the registry, Brainy resolves to delete it, but also creates a backup copy in his mind. With Nia then actually dreaming that Brainy is about to be seized by the Children of Liberty soon afterward, this all made for a very inspired way to put a big target on Brainy’s back, especially now that President Baker has finally agreed to deputize the Children of Liberty!

As for the final result of Kara’s and Lena’s trip to Lex’s prison, the National Guard eventually corners Supergirl there, just in time for Otis to also show up, and release all of the prisoners. The prisoners obviously aren’t much of an issue for Kara (I’m surprised that none of them tried to go after Lena, to be honest), but Kara does have to battle a Metallo-powered Otis, in what’s honestly a fairly solid duel! Kara even temporarily reverts back to her Kara Danvers identity to throw Otis off her trail, in a surprisingly clever tactic, even if this is quickly made moot when she has to turn back into Supergirl, in order to coerce prisoners into being knocked to the ground for the National Guard. Regardless, Kara and Lena manage to get away, Kara gets convenient intel from a prisoner adjacent to Lex’s cell (good thing that guy was in jail for leaking government secrets, I guess), and Otis gets detonated in Lex’s cell, in order to destroy all of the evidence therein… Except he’s just pieced back together at the end of the episode, making that supposed betrayal of Otis completely pointless. What was even the point of remotely detonating Otis’ Kryptonite heart then? Couldn’t Otis have just planted a bomb, and achieved the same result? 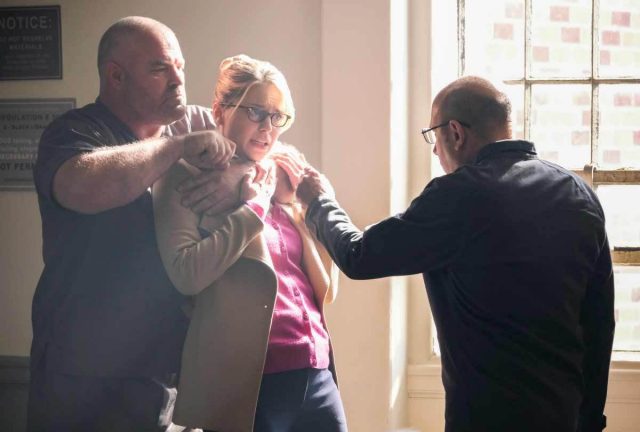 Still, Supergirl did manage to rebound a bit with, “Crime and Punishment”, and that’s good to see. It’s not often that Supergirl manages to hit the target when it tries to bring a dose of political and psychological reality into its fantastical world, but surprisingly, this episode managed to get the job done for the most part. Again, it’s really too bad that Kara herself can sometimes be this show’s biggest source of emotional infantilism, the kind that’s constantly dragging Supergirl’s storytelling and dialogue down in too many instances, but at least the public’s response to Red Daughter’s staged attack on the White House feels believable. It’s also cool to see a surprisingly relatable side effect result from James being injected with the Harun-El serum, which has left him unable to properly process the world around him, bringing his trauma to the forefront of his mind. Finally, Brainy uploading the DEO’s alien database into his own mind nicely rounds off most the show’s heroes being thrown in the deep end of drama, and that’s no doubt going to be all the more true soon, now that we’ve got our latest indication that Kara’s going to be walking away from her Supergirl identity for a time.