After a rather slow-paced start to Game of Thrones’ eighth and final season during the previous week, the show remained pretty modestly-paced in, “A Knight of the Seven Kingdoms.” Fortunately, the story momentum did pick up significantly in this episode, even without any action at all, with many lingering character arcs seeing their decisive resolution here, as many of the surviving characters outside of Cersei’s and Euron’s factions have now all gathered at Winterfell. This gives much of the show’s lead cast an entire episode to air out remaining grievances, resolve old guilt, and take care of any last unfinished business, as they face their final day before the arrival of the Night King and his White Walkers.

In terms of character focus, “A Knight of the Seven Kingdoms” is outstanding in every respect. The episode begins strong with Jaime being immediately brought before the council of leadership at Winterfell, to be tried and judged by the combined likes of Sansa, Jon, Daenerys and Bran. Tyrion helps to speak on Jaime’s behalf, though merely courts Daenerys’ wrath as a result, particularly when it becomes evident that Cersei lied about sending her armies North to help fight the White Walkers. The question of Tyrion’s status as a Hand to the Queen is one of many that still manage to remain in this episode, though Jaime’s material saw more definitive resolution in a lot of ways. Jaime’s reunion with Tyrion was as amusing as it was emotional, and Jaime apologizing to Bran for crippling him in the series’ first episode is sweet, even if Bran is unmoved, due to the all-seeing knowledge of the Three-Eyed Raven. Jaime does manage to fit in with everyone pretty well though, trying to cling to whatever merriment he can before the White Walkers come, alongside everyone else.

Tormund, Beric and Edd also arrive at Winterfell in this episode, with Tormund naturally quite excited to see that Brienne of Tarth is still among the living. Brienne also had an especially great character arc in this episode, as she reconciles with Jaime and agrees to let him fight under her command, while also getting an amusing chance to interact with Tormund again, who provides some welcome comic relief, particularly when he tells the gross, but amusing story of how he earned the title, “Giantsbane.” This culminates in a dramatically powerful duo of events, the first of which being Jaime knighting Brienne, making her the first official female knight in Westeros’ history, before this is followed by Podrick singing a song that nicely punctuates the final payoffs to several character arcs that were first teased in the season premiere. It’s a poignant moment that effectively signals the characters enjoying their last moments of peace before the big battle against the dead, which does indeed reach their doorstep during the final seconds of the episode.

Even with this episode entirely focusing on Winterfell, and never checking in with King’s Landing, the Iron Fleet or anywhere else, there were more than enough great character storylines to provide consistent entertainment value, without the sense of tedious setup that sometimes dragged down the season premiere. Little things like Missandei and Grey Worm planning a life after Daenerys takes the Iron Throne, Davos and Gilly talking to a young girl who wants to fight with everyone else, and Lyanna getting a brief, if slightly tense reunion with Jorah, all make for a lot of great ways to keep moving the characters’ storylines forward, before many of them no doubt meet their end during the following episode’s big battle for Winterfell. On that note, Sam passing his family sword on to Jorah is also an especially sweet and moving moment, one that I’m sure will provide plenty of satisfying ways for Jorah to start chopping up White Walkers in the following episode! 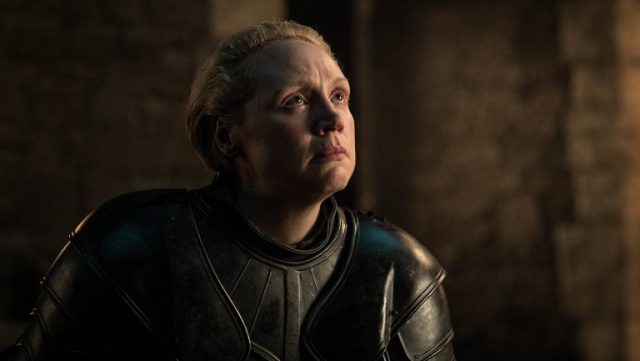 Ultimately, it’s determined during a war council that Bran will be the target of the Night King, since the Night King craves the power of the Three-Eyed Raven, so that he can plunge the world into eternal night. Since Theon arrives with some Iron Fleet soldiers shortly beforehand, just as he promised Yara he would do in the season premiere, Theon agrees to guard Bran, while the rest of the warriors at Winterfell try to hold off the Night King’s forces for as long as they can. The combination of strained humour and potent despair is nicely felt here, as a desperate plan is concocted to at least try to repel the dead, even when the battle seems hopeless. There were nonetheless two especially great character moments for the Stark sisters as they face down their home’s apparent demise however, with Sansa trying to find some common ground with Daenerys over their mutual affection for Jon, and Arya taking her specially ordered weapon from Gendry, before seducing him! Arya and Gendry having sex is a payoff that’s both funny and incredibly satisfying, since this romance has been foreshadowed very nicely, not to mention that Arya’s desire to not die a virgin is something that’s both amusing and logical.

Inevitably, Jon is saddled with one of the biggest and most difficult tasks in this episode too, beyond finding the resolve to pardon Jaime alongside Daenerys and his siblings. After a plan is put together to try and fight back against the dead, Jon meets Daenerys in the crypts, where the civilians are going to hide while the battle against the White Walkers wages outside. Uh, is that safe? Can’t the Night King resurrect corpses whenever he wants to?! Well, I guess that’s a problem for the next episode. Regardless, Jon shows Daenerys the statue of his late mother, Lyanna Stark, and takes that opportunity to confess his real identity as Aegon Targaryen to his lover. Daenerys then naturally puts together immediately that Jon being the last surviving male heir of House Targaryen would give him the actual claim to the Iron Throne, not her. There’s no time to dwell on this bombshell revelation continuing to pay all sorts of dramatic dividends however, since it’s quickly followed by the warning horn being sounded, confirming that the Night King and the dead have reached Winterfell, setting the stage for one of the show’s biggest battles yet in the following episode! 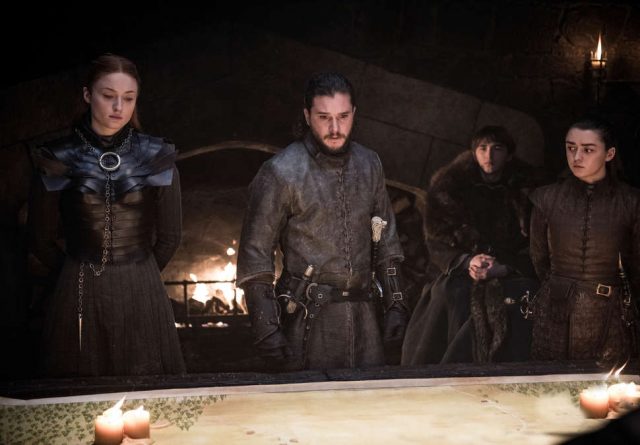 “A Knight of the Seven Kingdoms” is a fantastic and fulfilling climactic character examination for many of the show’s surviving leads, or at least the majority of them, before the dead arrive to lay siege to Winterfell. There really isn’t anything to complain about either, with this episode being one of the most character-rich and satisfying offerings in Game of Thrones’ entire history! Many of the show’s ongoing character arcs saw fantastic payoffs here, whether it was serious achievements like Jaime being allowed to join the other warriors and Brienne becoming Westeros’ first female knight, or amusing, yet satisfying turns, such as Arya’s romp in the hay with Gendry, or Tormund explaining how he got the name, “Giantsbane.” There may have been no check-in with Cersei and Euron at King’s Landing, but we really didn’t need one here. Right now, the real pressing problem is the fact that the Night King is officially knocking on Winterfell’s door as of the end of this episode, setting the stage for the sure to be long, bloody and brutal battle against the dead finally starting in the following episode. Fortunately, just about every key personality in the show was allowed to resolve any ongoing character struggles and unfinished business to wonderful effect here, leaving everyone primed and ready for the fight of their lives!