After its trip into the Darkforce Dimension, Cloak & Dagger takes a very surprising turn in its latest episode, as Tyrone is faced with an opportunity to clear his name and reclaim his old life. “Alignment Chart” is primarily spearheaded by a very strong Tyrone storyline, which sees a psychologically broken Connors seemingly desperate to repent for his former actions, though can Tyrone trust him to turn himself in? At the same time, Tandy continues her efforts to bring down New Orleans’ human trafficking ring, eventually enlisting Lia to help point her towards another arm of the criminal operation. The result is another very good episode of Cloak & Dagger, albeit one that still seems bored with the idea of Tyrone remaining a fugitive, since he’s still just wandering around in public freely, as if nothing is wrong. Again, how does no one in all of New Orleans seem to be bothered by the imposing young black man that’s wanted by the police?!

It’s baffling as to why Connors is initially so antagonistic towards Tyrone, particularly since he flees the church after first returning to the real world. Still, Tyrone using a veve made of gunpowder is pretty cool, which conveniently transports him next to Connors at the docks. Despite Connors initially holding Tyrone at gunpoint, he soon after lays the gun on the ground, revealing that it was the same gun that he shot Billy with so many years ago, and that, paired with the evidence of the saw he used to help frame Tyrone for Fuchs’ murder, will give Tyrone enough leverage to clear his name, and put Connors in jail. Obviously, this seems too good to be true at first glance, and Tyrone rather understandably doesn’t believe it.

The moral ambiguity of Connors was highlighted very well in this episode, particularly when Tyrone brings him to his father’s Mardi Gras tribe, finally giving Tyrone an opportunity to reunite with Otis. This provided a nice contrast to Tyrone’s intense reunion with Adina during the previous episode, with Tyrone and Otis having all of the power this time, and questioning whether or not they should just kill Connors, since they have all of the evidence needed to clear Tyrone, in theory. In reality, there’s still the pressing issue of Connors’ uncle apparently being part of one of New Orleans’ richest and most influential gentlemen’s societies, which was teased all the way back during the show’s first episode. In order to actually make the conviction against Connors stick, Tyrone must pull a, “Get out of jail free card” from Connors’ uncle’s arsenal, which has dirt on allies that Connors’ uncle has gotten out of legal trouble, spanning years.

The heist-style storyline at the gentlemen’s club is very cool, particularly with O’Reilly finally getting a chance to be useful again, despite Mayhem still languishing around the Darkforce Dimension. O’Reilly’s firing range scores are still pretty pathetic, but she’s still able to pull a good ruse, which is necessary for Tyrone to get into Connors’ uncle’s steam room, and pull a key to the wine cellar. After being told that the evidence is hidden in a wine bottle, Tyrone searches the bottle in question, only to find it empty. This naturally results in Tyrone teleporting out, then teleporting Connors back to the church, and nearly throwing him off of a balcony in anger! After seeing Connors’ fear and guilt over killing Billy however, Tyrone instead brings Connors to Adina, which is where the episode leaves Tyrone’s story arc. This was a great payoff to an overall very strong Tyrone storyline, one that also effectively gives Adina and Otis a chance to face the man who killed their son, which should hopefully give the entire Johnson family a great chance to heal, and not just Tyrone.

Tandy’s storyline didn’t land quite as effectively this week, even if it still had a pretty good payoff itself. The episode’s commercial breaks are often followed by Tandy telling pieces of a story about a farmer and a viper, seemingly out of context, which appears to be related to Tyrone’s storyline with Connors. Despite Tyrone’s story arc clearly dominating the episode however, Tandy nonetheless continues the investigation into the human trafficking ring, initially trying and failing to get Andre to point her to the victims for questioning, before she’s inspired to ask Lia for help instead. Tandy tries to get Lia on her side by enlisting Tyrone to pose as an abusive ex-boyfriend, which Lia oversees the, “Break-up” with, and this naturally offends Tyrone a lot, leading to him storming off and saying that he doesn’t need Tandy. Yeah, honestly, this is kind of a stupid plan on Tandy’s part. Tyrone’s reaction seems a little over-the-top, in fairness (as if anyone is going to believe that Tyrone will never talk to Tandy again), but how exactly does Tandy roping her black friend into a fake break-up somehow lead to vital clues about a human trafficking ring from Lia? Something really doesn’t add up here.

Regardless, this somehow works, and Lia spills that she used to be forced into prostitution by an ex-boyfriend, until Andre eventually inspired her to leave that life. When Lia reveals the identity of her ex-boyfriend to Tandy, Tandy then goes to get information from him, which naturally leads to her being attacked. Tandy manages to fight off the thugs fairly easily, though doesn’t seem to get much helpful information from Lia’s ex, who seems to be unaffiliated with the human trafficking ring. Upon Tandy exiting the drug compound, Lia is surprisingly waiting for her, before Tandy gives Lia an inspiring speech about taking the power away from bad people who want to hurt you. That’s very poignant… Except this speech ends with Tandy getting tasered by Lia, just as an ambulance pulls up in the final seconds of the episode! As much as Tandy’s storyline was a little tedious at times, I have to admit that this was an excellent twist, and the show did a good job of hiding it. Lia being a mastermind in the human trafficking ring, seemingly using the victims from her support group to push that operation forward, is both logical and chilling. This in turn begs the question of whether Andre is involved too, due to his friendship with Lia, and the fact that Lia directly mentioned him when explaining the backstory that she may or may not have been fully honest about. 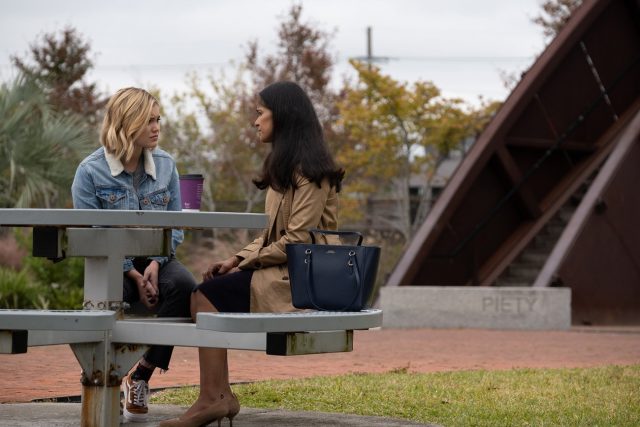 The story arcs of Tandy and Tyrone still aren’t exactly even in terms of quality, since it’s Tyrone’s arc that clearly excels over Tandy’s in this episode, but Lia being revealed as one of the human trafficking suppliers nonetheless made sure that Tandy’s story arc was completed with a great payoff. With Tandy herself being the latest victim of the human trafficking ring, it will naturally be up to Tyrone to save her, though I suppose it’s also true that the human traffickers are no doubt oblivious to Tandy’s powers at this point. “Alignment Chart” separated Tandy and Tyrone on two differing agendas this week, but the question of Connors’ trustworthiness made for a consistently engaging episode, even when Tandy’s storyline couldn’t always keep pace. Tyrone still not getting the evidence he needs, yet discovering that Connors’ remorse is legitimate, made for another strong story payoff, and I’m very interested to see how Adina handles her son’s killer suddenly showing up on her doorstep as well. Tyrone still not being caught wandering in public by anyone in New Orleans feels like an even bigger stretch with every passing episode, but at least he may be getting closer to no longer having to be on the run from the NOPD soon, even if Tandy’s capture is still no doubt going to force Tyrone to get his hands dirty!