In late 2018, Nintendo released Pokémon Let’s Go Pikachu and Let’s Go Eevee, to much fanfare among the Pokémon community, most excitedly from those who had played the original game, Pokémon Yellow, that they was based on.

While a number of mechanics in the game had changed, it was largely well-received, and the Kyoto-based company showed that it could take something classic and beloved, and tweak a few things to create something familiar but also new.

Later this year, Nintendo is launching The Legend of Zelda: Link’s Awakening, remade for the Switch, also changing up part of the formula with respect to art style and the way certain screen movements occur, while appearing to keep what made the original so interesting, charming, and unique.

Nintendo isn’t exactly shy to re-release existing games, and while Zelda games seem to be the only ones ripe for constant re-release lately–Ocarina of Time, Majora’s Mask, The Wind Waker, and Twilight Princess have all been re-released as “upgraded” games–they were tweaks and a coat of polish more than a complete reworking of the game.

Which got us thinking: what other games could Nintendo perform a ground-up remake on to liven up the series, return to a classic title, or otherwise freshen up? Here are our top five.

It is no secret that Nintendo has tried to recreate the magic that was Star Fox 64 from back in the late-nineties. It’s also no secret that their attempts haven’t been so successful. Between 2002’s Star Fox Adventures and 2017’s Star Fox Zero, the best entry in the franchise was the 3D re-release of Star Fox 64 on Nintendo 3DS.

So why not do it again, but this time, in proper form? Bring back the original, on-rails levels, but introduce a bit more free-form movement. Redo the voice acting, while keeping faithful to the original one-liners we love. Revamp the the graphics set to include all the latest technologies that we would expect from a space exploration and combat game. A few extra levels wouldn’t hurt, either.

Perhaps the strongest area of improvement could be in the multiplayer. This is where Star Fox (yes, we’d recommend going back its roots and not adding a number) could be a huge title in Nintendo’s multiplayer offerings. Massive stages with four, eight, or even 16 pilots at a time, all racing over top a sprawling metropolis below. Or perhaps everyone attacking a giant level boss and working toward a single objective.

There is a ton of opportunity for Nintendo to reinvigorate the Star Fox franchise in a way that is familiar, tried, and tested, but could also be made all new.

With Super Mario Maker 2 on its way in just over a month, this game is one that maybe Nintendo takes their time on, but nonetheless we’d love to see happen. Largely thought of as one of the best 2D Mario games, Super Mario World for the Super Nintendo was completely ahead of its time, and introduced elements that were ahead of its time.

We don’t necessarily want to see Nintendo just slap a coat of 3D World paint on this classic, but reinvigorate the art of the original game with perhaps some remixed sprites, new hidden areas, and perhaps even a further expansion to the Star World.

The art style could follow a sort of cel-shaded design, or perhaps something that has a bit more depth with a parallax effect. Heck, if Nintendo re-released this Halo: Anniversary style, they could allow players to switch between styles on the fly.

Probably the most casual of the games on this list, Pilotwings 64 brought a new style of gameplay to the Nintendo 64. It’s sort of a sports game crossed with a flight simulator with some aerial acrobatics mixed in for good measure. 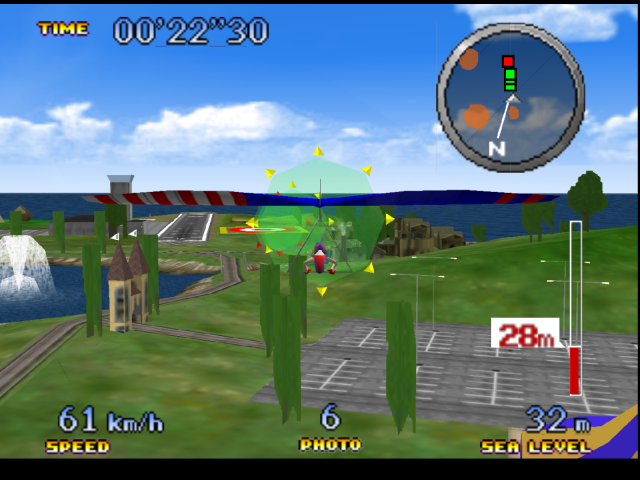 While the game was fun to play, it was too early for its time. The graphics are ridiculously outdated (as are the ones in virtually every other Nintendo 64 game), and controls were janky, to say the least. But with some (read: a lot of) effort in the visuals department, some (majorly) tweaked controls, and perhaps a series of new levels, aircraft, and clear conditions, a new Pilotwings game would be a very welcome addition to the Nintendo Switch portfolio.

There are also plenty of multiplayer modes in Pilotwings to expand on. Something akin to an actual flight simulator where multiple people are flying through a series of airport runways, competing for landing accuracy scores. Or another where multiple players have jetpacks with a series of projectiles (not entirely unlike Iron Man, we suppose), whereby the goal is to hit each opponent three times, MarioKart style.

And what a prime game for amiibo support. Virtually any amiibo could be supported, with the character in an aircraft of some kind, or for those characters who can fly–Charizard (Pokémon) or Revali (The Legend of Zelda: Breath of the Wild) as two examples–they could be the actual vessel you control!

Alright, so this is a bit of wishful thinking given that Microsoft now owns Rare, while the James Bond gaming license hasn’t been granted to anyone since 2012’s 007 Legends. And of course, Perfect Dark is owned by Microsoft Studios, of course, and it’s been longer–since 2012–that we last saw an entry in that franchise.

The market may be too saturated for shooters, and Nintendo isn’t one to really put out this kind of content themselves, but if we’re allowed to dream (and we think we are), either of these titles would be more than welcome returns to the Nintendo family.

This is a situation whereby Perfect Dark would likely be the better fit than a refreshed, remade GoldenEye, if only for the fact that the story itself in GoldenEye is quite linear, as it follows the plot of the movie of the same name. Perfect Dark, however, could be modified enough to come up with new story arcs, proper character development, and potentially even enough content to make the game into a series once again.

It would also be a great way to bring some bots back and have a rousing match or two of classic multiplayer.

Okay, fine, slap Super Mario 64 and The Legend of Zelda: Ocarina of Time on the list, because of course they also deserve full remakes. But only if Nintendo doesn’t change anything. Give them a proper, 2019 redesign, re-record some audio, refine the controls in the ever so slightest way, but don’t change anything else!

What did you think of our list? What games would you like to see remade in the same way that Nintendo has done with Link’s Awakening and Pokémon Let’s Go?