We’ve all heard stories about things that supposedly go bump in the night. These are tales that are meant to both scare and entertain us, and have been used for, borrowed from or influenced by folklore, fairy tales and/or horror movies, not to mention literature itself. One of the constants in these stories is the idea of blood sucking vampires, who thirst for human blood and have the ability to change those that they feast upon. The most famous of the bunch? That’d be Dracula. Second to him? Probably Nosferatu, who was famously portrayed in a classic silent monster movie before speakies even became a thing.

Inspired by, and written in homage to those classic tales, is Joe Hill’s wonderful novel, N0S4A2. Pronounced as ‘Nosferatu,’ the novel’s title is written that way because of a license plate. It’s a neat little trick that makes the cover stand out, but it’s spelled that way for a narrative reason.

You may not have heard about Joe Hill before, but it’s almost guaranteed that you know of, and have perhaps even read some of the many popular books his famous father has penned. Although he doesn’t use his family name for obvious reasons, Joe is actually the son of the legendary and prolific king of literary horror, Stephen King. Yes, that guy.

Originally published in April of 2013, N0S4A2 was Hill’s third published novel, and coexists with such other very good to great works as Heart-Shaped Box, Horns and The Fireman. I would also be remiss if I didn’t mention his short story collections, Strange Weather and 20th Century Ghosts, because both are also quite good. In fact, the latter is actually one of the best collections of brief tales that I’ve ever read.

While it’s obvious that this is a story about a vampire, Charlie Manx isn’t the type of blood sucker that the classical definition of the term brings to mind. No, the supernatural being — who begins the book in a coma — is a special kind of creature. He thrives on abducting children, locking them into his 1938 Rolls-Royce Wraith and knocking them out. They are his prey, and his goal is to feed on them en route to his twisted home realm of Christmasland, which was crafted by his own imagination. Once there, the children and their souls become trapped, as they continue to become his.

Enter one Vic McQueen, a girl who has supernatural powers of her own that allow her to travel anywhere she needs to using a fast bike and a rickety old covered bridge. She doesn’t know it at first, but she eventually becomes a big part of Manx’s story. 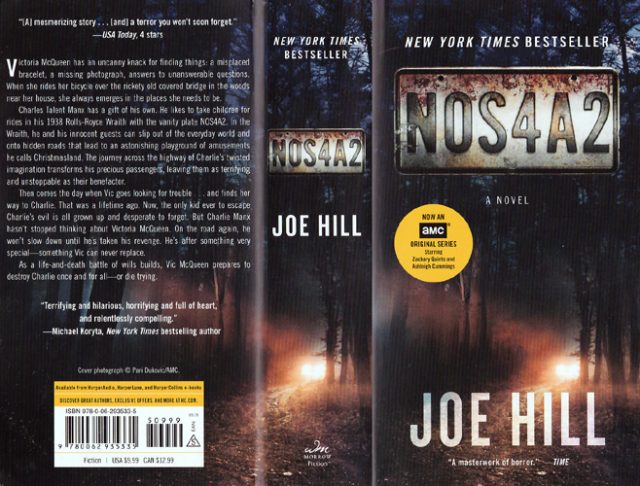 As with most books, I would be doing you a disservice by mentioning any more about N0S4A2‘s plot. For that reason, I will stop where I am.

To say that N0S4A2 is a memorable book would be putting it lightly. Like some of Hill’s father’s better works, this is a novel that will remain with you long after you’ve read it, and exists as a must read for any fan of the horror genre. Joe Hill’s writing is sharp, his tale is dark and disturbing, and there’s a lot of depth to it. Not only that, but it also pays homage to the classic monsters of yesteryear, while putting its own twist on things.

If you can, I’d wholly recommend picking up or borrowing a copy of N0S4A2, and reading it before diving into the new AMC show that is based upon its words. Doing so will give you a better appreciation for the story, and will also hopefully introduce you to a talented author you may not have known about. The show is the reason we decided to write this review, but the book is deserving in and of itself.

**This review is based on a copy of the novel that we were provided with.**