Nintendo and The Pokemon Company streamed a Nintendo Direct presentation on their social media channels today, delivering some big information about the hotly anticipated Pokemon Sword and Pokemon Shield games, slightly ahead of next week’s E3 2019 keynotes! As previously promised, the presentation revealed some exciting bits of information about the two upcoming eighth-generation Pokemon titles, including a few new Pokemon reveals, and some all-new battle mechanics that are sure to redefine NPC, co-operative and competitive battles in a massive new way for the mainline Pokemon series’ Nintendo Switch debut!

Arguably the biggest addition to the battle mechanics in Pokemon Sword and Pokemon Shield is the Dynamax system, which appears to be a modification of the idea behind the Mega Evolution system, first introduced in Pokemon X and Pokemon Y back in 2013. With Dynamax, players can have one of their Pokemon become gigantic, turning all of their moves into super-powered ‘Max Moves’, which may potentially change some of their functionality entirely, on top of making them much stronger! The Max Moves in turn appear to be a tweak on the ‘Z-Moves’ that were introduced in Pokemon Sun and Pokemon Moon from 2016. Dynamax obviously has some caveats however, namely that only one Pokemon can use it per battle, a special item called a “Dynamax Band’ is required, and the Dynamax effects only last for three turns, before the Pokemon using it reverts back to their normal size and move set. Opposing trainers can also make use of Dynamax to boot, including those within Pokemon Gyms, which are now set up to resemble huge stadium-like environments, seeing as Pokemon battling is a national pastime in the games’ new Galar region, more so than previous regions. 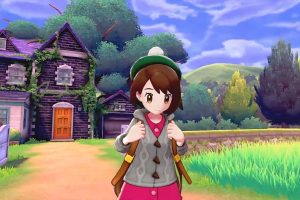 Another major addition to Pokemon battles in Pokemon Sword and Pokemon Shield is the introduction of Max Raid Battles. This mechanic appears to be a way to bring Pokemon Raids from mobile gaming sensation, Pokemon Go into the world of Pokemon Sword and Pokemon Shield. Whether via local Nintendo Switch wi-fi connection, or online via Nintendo Switch Online, up to four players can combine their Pokemon to take on a permanently Dynamax-powered Pokemon. Some Pokemon featured in Pokemon Sword and Pokemon Shield can only be caught from Max Raid Battles, and the Pokemon that appear in these battles will vary depending on the location and weather conditions. Should a party of trainers be victorious, they will all get the chance to catch the Pokemon they were battling, though only one trainer in a raid party will be able to use Dynamax in a Max Raid Battle, so coordination is key to catching Max Raid Pokemon, in turn providing motivation for local friends to team up and defeat these powerful Pokemon together, where they can most easily communicate and strategize.

Outside of battles, several new Galar region Pokemon were also confirmed during this Nintendo Direct presentation, and as with Pokemon Let’s Go Pikachu and Pokemon Let’s Go Eevee, wild Pokemon will be visible in the field in Pokemon Sword and Pokemon Shield, with battles being triggered when your trainer touches wild Pokemon. Several all-new Pokemon making their debut in the Galar region were shown, including a sheep Pokemon, Wooloo, a normal-type Pokemon with highly treasured wool, Drednaw, a water/rock-type Pokemon with a hardy disposition and a jagged jaw that can easily break rocks and metal, Corviknight, a steel/flying-type Pokemon that can apparently fly players around the Galar region, and Gossifleur, a grass-type Pokemon that craves living environments with clean air and water. An evolution for Gossifleur, Eldegoss, was also briefly shown. Finally, a new ‘Wild Area’ was shown outside of the towns and cities of the Galar region, where players can catch a variety of Pokemon depending on the location and weather, while also being able to freely control a three-dimensional camera for the first time, rather than being stuck with an overheard view, as with prior main series Pokemon games.

A few story details for the new Pokemon games were also trickled out, including revelations regarding the player’s rivals and allies during their journey through Galar in Pokemon Sword and/or Pokemon Shield. Apparently, the region’s Pokemon champion is an undefeated Pokemon master named Leon, whose younger brother, Hop will serve as the player’s main rival throughout the game. The region’s professor is also a kindly elderly woman named Professor Magnolia, whose granddaughter and assistant, Sonia will provide some sort of help for the player throughout their journey. One of the game’s gym leaders was also revealed, that being Milo, a grass-type Pokemon trainer. It would thus appear that the island/Kahuna system from Pokemon Sun, Pokemon Moon, Pokemon Ultra Sun and Pokemon Ultra Moon is being ditched in Pokemon Sword and Pokemon Shield then, in favour of a return to the classic-style Pokemon Gym-based story progression.

Finally, a release date was confirmed for both Pokemon Sword and Pokemon Shield, which can be purchased individually at retail and digitally via the Nintendo Switch eShop, or together in a double pack that includes both versions of the game, on November 15th of this year. The base $59.99 USD/$79.99 CAN price will be maintained for the standalone versions, though the price of the double pack, which is not yet available for pre-order at the time of writing, is presently unknown. The two legendary Pokemon emblazoned upon both game boxes were unmasked towards the end of the presentation however, with both predictably being wolf-themed legendary Pokemon. Pokemon Sword’s legendary Pokemon is Zacian, a wolf with pink sashes that holds a sword in its mouth, while Pokemon Shield’s legendary Pokemon is Zamazenta, a wolf with shield-like armoured plating across the front of its body. It’s not currently confirmed, but very likely, considering the Pokemon games’ history, that Zacian can only be battled and caught in Pokemon Sword, while Zamazenta can only be battled and caught in Pokemon Shield.