Arrow continues to rapidly move towards Season Seven’s endgame with, “Living Proof”, which picks up immediately after the conclusion of the previous episode. With Oliver buried under rubble, and the rest of Team Arrow staggering through the building that Emiko just dropped on their heads, the team scrambles to pull themselves together before moving to put a stop to the Ninth Circle for good. The timing couldn’t be worse for Felicity as well, since the SCPD has delivered a warrant to seize Smoak Technologies’ assets, including the essential support tools that Felicity has to use in order to keep the other heroes safe.

Arrow’s strong drama continues to sustain, “Living Proof” very effectively, particularly with the surprise re-appearance of Colin Donnell as Tommy Merlyn! It’s been a while since Donnell has appeared on Arrow, as everyone’s favourite enduring callback to Oliver’s lowest and darkest origins at the start of the show’s run during 2012-2013. In this case, Tommy manifests as Oliver’s inner demons, taunting him forward as Oliver appears to try and escape the room that he’s trapped in. Tommy also tries to appeal to Oliver’s inner qualities however, which are now being suppressed by the darkness and frustration of Oliver rejecting his sister, and struggling with having to put her down for the good of Star City. It’s a great dramatic device, especially when Oliver’s attempts to break a path forward through sheer aggression only appear to trap him even more. 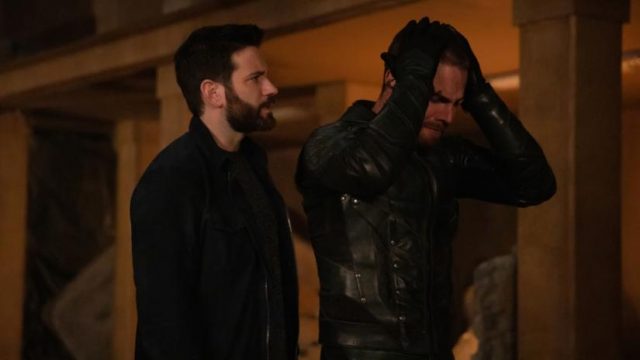 For most of the episode however, the bulk of drama revolves around the other members of Team Arrow, who have a limited amount of time to escape the building and find Oliver, before they’re all either crushed, blown up, or otherwise fail in their mission. All the while, Felicity desperately tries to quarterback from the bunker, with some help from Alena, allowing Team Arrow to take stock of their story arcs one last time, before the final battle against Emiko and the Ninth Circle. Roy in particular is facing down quite a lot of anguish on account of his bloodlust, to the point where he almost sacrifices his life by dropping into hazardous nerve gas, in order to disable electrical power that threatens to cause an explosion. This is another great testament to Roy’s heroism, though for some reason, the direction was really overwrought here, as if it wasn’t certain that Roy was going to survive. Roy has been all over this season’s flash-forwards though, so pretending that he may not make it out of this predicament is both pointless and tedious. Why did the show even bother creating this obstacle, if we knew that Roy was obviously going to survive?

That said, the team taking stock of their lives once again, as they prepare to end Star City’s latest terrorist threat, led to some pretty standout material. Seeing Rene and Dinah refuse to give up on Roy, even when they don’t know him, makes for a great show of solidarity and unity among Team Arrow, keeping the heroes strong as they prepare to confront Emiko. Likewise, Felicity struggling with her legacy leads to some  equally great character material, particularly when Alena plants the idea in her head to go off the grid, which we know she eventually does, thanks to the flash-forwards. This is no doubt also a way to start setting up Emily Bett Rickards’ exit from Arrow, since she’s apparently opting not to return for the show’s final season in Fall. Still, it’s interesting to see the show start tying together the birth of Mia, and the eventual future state of Star City, as Archer remains at large, and Alena continues to hold on to the program’s root code. I could have done without the pointless show of intimidation by Emiko at the bunker though. How did Emiko even get there so quickly, only to beat Team Arrow to other important locations later in the episode?

This turn with Alena also ends up coming into play during this episode’s flash-forwards, wherein Felicity tries to track Alena down, in order to reclaim the root code of Archer, and hopefully destroy it forever. Kevin Dale has apparently forced the future Alena into hiding, but even when she finally resurfaces, William goes rogue to try and steal key blind spot data from Dale himself, even running into Rene in the process. William’s impulsiveness ends up biting both himself and Rene in the ass too, since it turns out that Dale is fully aware of both of their treachery, surrounding the two men with Zeta super-soldiers as the flash-forward storyline ends for this episode. Making matters worse is that Zeta’s also happen to surround Felicity, Mia, Roy and Dinah in the Canary hideout at the same time! The flash-forward storyline is at least moving toward what’s hopefully a decent climax, but at this point, it’s still failing to hold a candle to the much better present-day events on Arrow, so it’s more difficult to readily invest in the fate of the future heroes, sadly, even in the season’s penultimate episode.

Going back to the present, Team Arrow does inevitably find Oliver, right when he finally finds it in himself to not give up on Emiko. After the team manages to finally fully regroup and exit the destroyed building as well, the Ninth Circle’s agents make their way to the SCPD precinct, slaughtering every cop in their path, before Oliver’s crew can get to them! As usual, being an SCPD officer doesn’t seem to pay. Regardless, after the rest of Team Arrow starts fighting off the Ninth Circle’s thugs, Oliver manages to make it to the roof, giving Emiko another chance to stand down, but also refusing to kill her. Obviously, we still need to have a season finale, so the battle against Emiko is still being drawn out just a bit longer, but the stage is nonetheless nicely set for an exciting final struggle against the Ninth Circle. Emiko now has everything she needs to unleash a deadly poison on Star City, in a last-ditch effort to cement Team Arrow as the villains, and destroy the Queen family legacy once and for all! 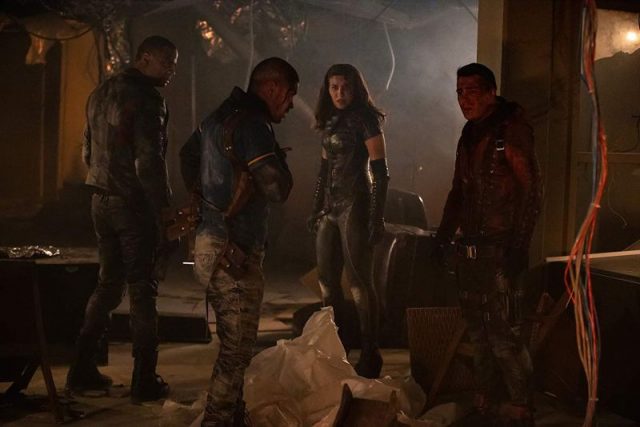 “Living Proof” does a great job of keeping up Arrow’s strong story momentum, despite some forced drama that has to be layered into a storyline that can’t quite stretch itself to the hour-long runtime. That said, Team Arrow’s climactic regrouping in both the present and the future (albeit mostly the present), at least delivers plenty of solid character moments, even if some of the more dramatic obstacles had to be forced for want of keeping the excitement up in an otherwise low-key, character-focused episode. Oliver’s journey to once again drive back his darker desires as a vigilante serves as an episode highlight, particularly with one of the best guest appearances yet from Colin Donnell’s Tommy Merlyn, who appears to have successfully challenged Oliver to not just put an arrow in his sister and be done with it. Arrow has enjoyed a standout Season Seven, so all that’s left now is to stick the landing with a season finale that will hopefully provide a decisive resolution to the lingering sins of the late Robert Queen.

Arrow 7.21: "Living Proof" Review
Arrow has its vigilantes desperately trying to regroup before the final battle against the Ninth Circle in the mostly great, "Living Proof", complete with a superb guest appearance by Tommy Merlyn.
THE GOOD STUFF
THE NOT-SO-GOOD STUFF
2019-06-15
83%Overall Score
Reader Rating: (0 Votes)
0%