When I grew up, action figures and toy cars were popular, and it wasn’t uncommon to see advertisements for Hot Wheels play sets and monster truck events on TV. In fact, I recall seeing many advertisements for the latter, and most of them involved the ever-popular Grave Digger truck. While this was back in the 90s, it seems like Monster Jam and its beloved vehicular behemoths are still going strong and playing to crowds throughout North America.

The fuel driven sport has also received a new video game adaptation, thanks to the folks at Rainbow Studios, who were behind the popular ATV Offroad Fury games on PS2, and some of the more recent MX vs. ATV titles. It’s called Monster Jam: Steel Titans.

Unlike other kids my age, I was never into cars. I didn’t have many toy cars, never asked for a Hot Wheels play set or track, and only ever really played with those at friends’ houses. The same is true of monster trucks. Despite this general lack of interest in cars themselves, I adore great racing games like Forza Horizon 1 through 4, as well as many that came before it. In fact, ATV Offroad Fury was one of my most played PS2 games.

When I heard that Monster Jam: Steel Titans was coming out, I made sure to keep an eye on it and requested the opportunity to review it, with the hope that it’d be a fun, arcade experience. One that I could turn on, lose myself in and enjoy. 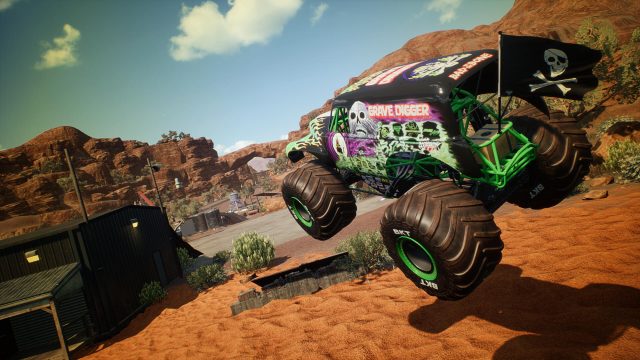 Unfortunately, Steel Titans didn’t end up being what I’d hoped. Even though I went into it with low to moderate expectations, it hasn’t been very entertaining or user friendly. As such, it’s not something I can recommend in good conscience. That isn’t to say it’s a downright terrible game, because it’s not. There are simply a number of issues that hold this thing back from being the fun, exciting and action-packed game it should have been. The one that the sport deserves.

Upon booting this thing up, I was dropped into Monster Jam University, which was just a fancily named tutorial set in an open, desert environment. There, I was taught how to drive, brake, go over jumps, do some tricks and destroy the game’s surprisingly limited amount of breakable objects. Then, after that short bit of schooling, I was able to either continue to explore the open area (which has jumps, shipping crates, a runway and more to drive on, jump off of or climb over), or start the career mode. I chose to begin my career.

One can access the career mode by pressing pause and navigating to it through the game’s bare-bones menu system. Once there, they’ll see several different tours, which get bigger and more difficult as you go along. All but one will be locked when you start, and you’ll unlock new ones by coming in first, second or third in the standings. Through this, you’ll begin humbly, by racing along the airstrip and through the (mostly) open desert, before moving on to stadiums and arenas of increasing sizes. This means bigger crowds, higher stakes and more challenge, as you’d expect.

Events include the traditional circuit and straightaway race types, as well as time attack events where you’re put into a tournament bracket and face off against one opponent at a time. These are joined by stunt challenges, point-to-point dashes and events where you must try to break as many things as possible. This is all really straightforward and expected from a game such as this. However, Steel Titans‘ controls, physics, AI and frustrating stunt mechanics betray it.

One would think that a game full of monster trucks — especially one that promotes giving players the authentic experience through Monster Jam University — would nail the heavy, weighted vehicles it’s based around. Alas, that somehow didn’t happen here. The result is a racing game whose massive vehicles slip, slide, flip, roll and tumble like they’re driving on ice and aren’t very heavy. Couple that with A.I. that is almost flawless and you have the recipe for frustration.

The first race I tried was fine, because it was just a straight strip of desert runway. It was surprisingly challenging, but I won it after a couple of tries, and got a better start when I did so. However, once I got to the point-to-point dashes (which put checkpoints up throughout the desert and asked me to drive to one, then the next and so on), Monster Jam: Steel Titans‘ issues started to show.

I’d be driving along, doing well, when all of a sudden my truck would hit some small rock that I hadn’t seen, and would proceed to fly into the air before flipping all over the place. Once it landed — either on its roof or its side — it’d usually need to be reset (using the B button). Of course, the other racers would fly by me, and get massive leads that I simply couldn’t even get close to, causing me to end up in 8th in several of these. I’d do well, then have one little issue, experience the wrath of this thing’s poor physics and be screwed.

Why didn’t I restart the events? That’s a good question. I would have, but there’s option to do so. Nor is there a rewind feature (which not all racing games have anyways, and that’s fine). Thus, once I began a career event I was stuck with my result and could not retry at all, unless I reset the entire tour. These tours are made up of between several and more than ten different events, too, so you can guess how enticing an option that was.

On the exterior, Monster Jam: Steel Titans looks like it’d be an absolute blast to play. Hell, it even does on paper. The disappointing reality, though, is that it isn’t. As much as I tried to enjoy this thing, it became clear that its physics, controls and near flawless (in terms of never crashing or screwing up) A.I. weren’t well designed. This became abundantly clear after a couple of hours, when I started to struggle during relay events that tracked my time doing a few laps around an oval and then compared them to another, computer controlled racer’s. I raced some quality laps, but kept losing. Then, in another event of the same type, I flew up in the air, rolled around in mid-air, crashed and then reset my truck, but was still able to beat what should have been a more challenging truck.

The trick events boiled down to trial and error. Since the controls didn’t make it very easy to do many things (except for donuts) on purpose, I would just go over jumps, turn the truck different ways and rotate or flip all over the place. It often felt like I wasn’t in control. I ended up winning quite a few of them, though, because my crazy (and mostly accidental) flips, turns, crashes and the following attempts to spin my wheels and right my truck before it would reset somehow worked out. Meanwhile, all I can do on command is a decent donut, which also helped.

Within these events, one’s goal is to try to pull off a couple two-wheeled combos (for added score), collect tokens that automatically add to your combo multiplier or smash boxes, porta potties and things like that. There aren’t many cars to drive over or crush, which is disappointing, nor are the destructible items very interesting. Then again, that’s the theme of this game and review.

I would be remiss if I didn’t mention the trucks, themselves, which include some popular metallic stars like Grave Digger and Northern Nightmare. The latter is actually the first vehicle you can unlock, and it’s what I kept using, because I’d already upgraded it so much by the time I unlocked another. You can buy different trucks, or unlock them through progress, but they’re expensive and it takes a while to do so. They also don’t seem to have their own individual stats, or much in the way of differences outside of aesthetics, so I didn’t see a reason to move on from the one I’d already upgraded.

These upgrades improve your speed, acceleration, traction and the like. If you want to compete, and be able to keep up, it’s important that you take advantage of this option whenever possible. Don’t worry, though, because the game will alert you with icons that show when something can be improved upon. By that I mean that it’ll tell you when you have enough in-game currency or experience (whatever you want to call it) to buy a particular upgrade. 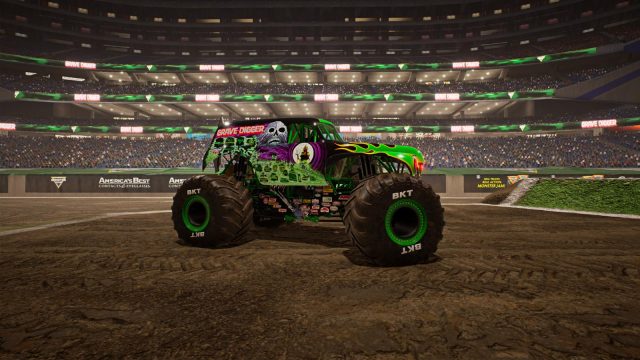 One other major downside and omission is a lack of online multiplayer. Monster Jam: Steel Titans supports two player, split-screen multiplayer through local play, but that’s it. Outside of that, it’s a single player experience. This will surely disappoint people, though I must say it didn’t bother me too much. I tend to prefer single player games, and find that the online modes of racing games often devolve into chaos, because people try to crash into and screw others over for fun.

Of course, that isn’t those games’ fault.

The visuals do look relatively decent, and you’ll experience a solid sense of speed when you drive around. There is a bit of slowdown, though, with a framerate that isn’t always stable. I found that it didn’t really affect my racing much, however,  because it mostly occurred during the post-event animations. The loading times were quite lengthy, though, which made for some annoying moments. Reason being is that, as I said before, you cannot restart a race or any other type of scenario. This meant that when I kept coming in a close second during one tour’s opening relay race, I would quit out and then reset the tour. That involved going back to (and loading) Monster Jam University, pressing pause again, selecting the career mode, picking the tour and starting it anew. Choosing my truck and (male or female) racer, too.

I don’t know why they made it so cumbersome. Every racing game should have a restart option, not to mention difficulty settings for its main mode, which this one also doesn’t have for whatever reason. You can change the difficulty during exhibition events, but that’s all.

The sound is also fine, but middling. Don’t go in expecting much from it and you’ll be fine with what you get. There’s lots of loud engine noises, crash effects and the like, but nothing that stands out. The ‘licensed’ music is also pretty forgettable, with bland and basic rock and punk songs that you’ll likely tune out or turn off.

Carrying a $39.99 price tag ($64.99 for the special edition), Monster Jam: Steel Titans is a tough sell. There’s just not enough to this game, let alone enough fun to be gleamed from it, to make it worth buying for that price. If the controls, physics and artificial intelligence weren’t so frustrating, that wouldn’t be the case, but they are. If you’re a fan of these massive vehicles, wait for a deep sale before jumping in, or at least go in knowing that this isn’t a first place finisher.