With the new stakes set, and the new threats made known, Agents of S.H.I.E.L.D. presents an especially heavy focus on the evil Coulson doppelganger, Sarge and his crew in, “Window of Opportunity”, while also catching up with Fitz and Enoch during their mysterious new mission in space. Simmons’ and Daisy’s party almost entirely sat out this episode, beyond a brief appearance in the epilogue (so they might as well have not appeared at all), but this was fine, since it allowed for heightened story focus on the new obstacles facing our heroes, now that the new status quo was established for each of them in the previous season premiere.

This episode does a superb job of fleshing out Sarge’s crew just enough to make them engaging and interesting, without effectively tipping viewers off as to why they’re on Earth, and why they’re intent on causing so much trouble. The dialogue scenes shared between Sarge and his crew paint an effective picture of a weary, loyal and amoral bunch of precision thugs who are clearly up to no good on Earth, even though their agenda hardly seems understandable. This of course also makes them especially unpredictable obstacles for S.H.I.E.L.D., particularly May, who is struggling to reconcile seeing Coulson’s face on a new threat to the planet, despite supposedly being there for Coulson when he finally died off-screen a year before this season’s events.

All the while, Mack struggles to keep up with the increasingly confusing agenda of Sarge and his goons, while also trying to delegate responsibility between his remaining S.H.I.E.L.D. agents. There’s disappointingly little time dedicated to the mourning of the fallen Agent Fox, including a merely brief check-in with Keller, who was apparently Fox’s recruiter, as well as Yo-Yo’s efforts to comfort Keller, though this kind of makes sense, considering the urgent clock that S.H.I.E.L.D. is on. The weak narrative link on this note actually happens to be Benson, who spends the entire episode studying the remains of Tinker, the former underling of Sarge who turned to cement during his, “Crossing” to Earth. Benson unfortunately drags down the episode by telling viewers, via Mack and May, what the show’s audience could pretty much already piece together, while also bitching and moaning about having to work for S.H.I.E.L.D. This makes Benson come off as too unlikable and annoying, and makes one wonder why Mack doesn’t just give him the boot, if he’s going to have such an attitude. Sure, S.H.I.E.L.D. is desperate with Daisy and Simmons lost in space, but is Benson really the only smart guy that Mack could recruit?

Fortunately, this episode does at least manage to present a pretty thrilling climax. May, Yo-Yo and several other S.H.I.E.L.D. agents eventually corner Sarge’s group during a jewel heist, another confusing step in their grand plan, which follows Sarge and co.’s apparent terrorist attack at the museum in Indiana, and their scouting of a nearby junkyard. May manages to outsmart Sarge’s mystery spatial-warping technology, allowing her to get into Sarge’s rig and knock around Pax, Snowflake and Jaco, though despite this cool action scene, she is eventually dumped back into the diamond vault by Sarge, who gets away with all of his own agents. At least we do get a hint that diamonds are worthless to Sarge’s crew however, who are instead seeking minerals like quartz and topaz to try and power their rig and gear. Could Sarge’s crew simply be a bunch of inter-dimensional pirates? It seems likely, though like I said, we can’t currently know for sure.

This episode’s subplot with Fitz and Enoch also manages to be pretty great though, beginning with Fitz quickly blowing his cover after he expresses disgust at a Xandarian delicacy, in a loose but appreciated nod to one of the key planets from the Guardians of the Galaxy movies. After Fitz is found out, and Enoch is quickly discovered soon afterward, Viro, the head of the cargo ship that Fitz and Enoch apparently got recruited on off-screen, tries to blow them out of the airlock. Fitz however talks Viro into allowing himself and Enoch to work for free, as slaves, until they get to the planet that the ship is headed towards, which does so happen to be the planet that Simmons sent the S.H.I.E.L.D. Quinjet towards at the end of this season’s premiere. Viro accepts these terms, and Fitz and Enoch are thus allowed to stay, though at the expense of the inferior engineering crew on the ship now being expendable.

Despite the harrowing circumstances for the ship’s other engineers however, whom Enoch is initially content to just allow to die, since it’s tactically unsound to help them, Fitz declares that he can’t look Simmons in the eye if he allows so many innocent lives to end. Thus, Fitz appears to make a display of solidarity by entering the airlock with the other engineers, whom Viro happily decides to blast out into space. It turns out that Fitz and Enoch pull a fast one however, since Viro activating the airlock instead sucks him and his cronies into space, while Fitz and the other engineers are ironically sheltered and safe! Enoch manages to crawl his way back to the controls to let everyone out, and thus, Fitz gets to be a hero, while using his brain to dispatch the alien villains-of-the-week in a really cool way too! Fitz knowing he couldn’t negotiate with Viro because of his own history in the Framework as a HYDRA mastermind was also a great callback to one of Fitz’s most tragic, but also most character-defining turns from a couple of season ago! Unfortunately though, now that the engineering crew needs to be deposited somewhere that won’t execute them for mutiny, Fitz and Enoch are instead forced to take them to a different planet called Kitson, tragically missing Simmons’ and Daisy’s arrival in the Quinjet by mere moments! Ouch! That’s some bad luck for you! 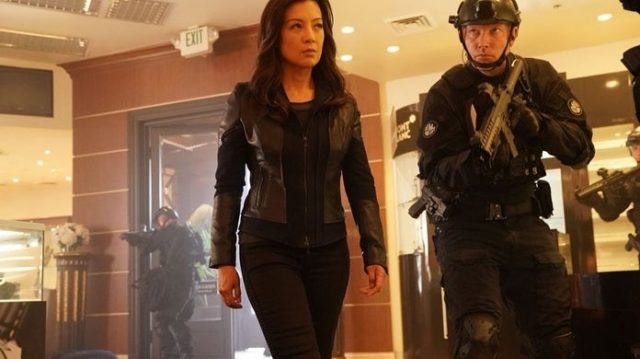 “Window of Opportunity” continues to keep the sixth season of Agents of S.H.I.E.L.D. progressing on a very exciting note so far, providing some great development for Sarge and his mysterious crew, while also proving that Fitz and Enoch are still effectively able to take care of themselves in deep space. Even with the big Simmons/Daisy cliffhanger pretty much entirely un-addressed for the time being, there was still plenty of action and excitement to enjoy here, particularly with Sarge’s ultimate plans for Earth still a mystery, though still plenty intriguing and engaging to watch unfold. Fitz and Enoch heading to another new planet should also hopefully keep the show’s deep space storyline going strong in the following episode, particularly as Daisy and Simmons no doubt end up embarking on their own interplanetary misadventure, after having just missed Fitz with their own arrival at the other planet. Even though the show is still playing very loosely with Marvel Cinematic Universe canon at this point, barring an eventual clarification on how it’s unfolding in the fallout of Thanos’ snap during some upcoming episode this season, Agents of S.H.I.E.L.D. still appears to be doing plenty well with its own separate storyline. Thus, even if the show still feels like it’s clashing with the lore of the MCU movies for now, it’s tough to really care that much when Agents of S.H.I.E.L.D. remains as good as it is.

Agents of S.H.I.E.L.D. 6.2: "Window of Opportunity" Review
Agents of S.H.I.E.L.D. stays on a very exciting note with, "Window of Opportunity", which puts Fitz and Enoch in a deadly predicament, while providing more insight into Sarge and his mysterious crew.
THE GOOD STUFF
THE NOT-SO-GOOD STUFF
2019-07-16
88%Overall Score
Reader Rating: (0 Votes)
0%