iZombie stayed on much the same note in, “Death Moves Pretty Fast”, while continuing to build new dramatic stakes for the show’s lead personalities, and New Seattle at large. The episode fortunately delivers another nicely enjoyable case-of-the-week as well, one somewhat satirizing the style of Ferris Bueller’s Day Off, after Liv consumes the brain of a murdered, independently wealthy teenager. At the same time, a promising new antagonist begins to make themselves known, after more human/zombie unrest in the city.

The Ferris Bueller’s Day Off homages in the case-of-the-week aren’t too overbearing, but they are consistently fun and amusing to experience. Making the latest murder case even more interesting is that Babineaux is also benched in this case, mostly only showing up in occasional video calls, after he injures his back at the crime scene. This was not only a nice way to change things up from the usual crime-solving dynamic for iZombie, but also made for a funny way to derive some additional humour from the Ferris Bueller’s Day Off style of the storytelling, with Liv appearing to monologue to the audience, only to always be revealed to be relaying comical information to Babineaux via video call. With Babineaux never actually there then, Ravi is thus left to sub in for Babineaux during the case (does New Seattle oversee its police force’s habits at all anymore?), which presents a mostly effective murder investigation with enough twists and turns for the most part, particularly since the victim was well-liked by pretty much everyone. 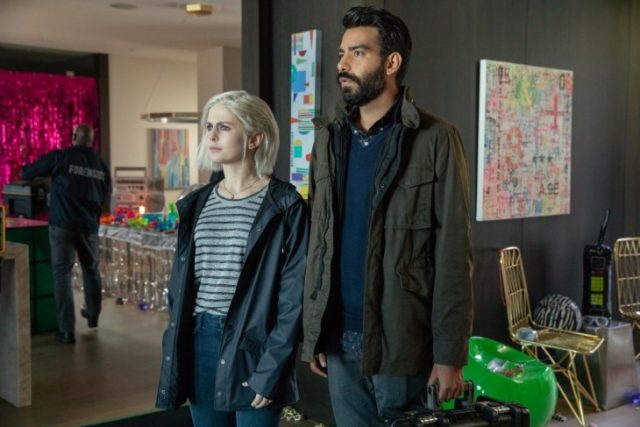 Temporarily benching Babineaux also provided a solid chance to rely on some new allies outside of Liv and Ravi to solve the case, most notably Vampire Steve, who becomes instrumental in how the case is ultimately solved. After forging a pirate radio broadcast supposedly from the victim, which leads to Steve getting shot by a sniper, the killer is nonetheless caught, and it turns out to be the exasperated best friend of the victim. This could have been a decent twist, though disappointingly, the way that the case ultimately peters out is pretty disappointing. The killer is caught with ten minutes left to go in the episode, and he’s also apprehended in a very anti-climactic way, escaping down an emergency stairway from his sniper position. How did this kid even get hold of a sniper rifle anyway?! It just felt like the case didn’t know how to end itself properly in this episode, and that’s disappointing, since the rest of it is pretty fun to watch unfold.

Similarly, a mostly compelling subplot also unfolds with Blaine in this episode, after it’s revealed that he’s the victim’s neighbour, and threatened to kill him the night before the victim actually died. This was actually one of Blaine’s best episodes in a long while, as Al continues to probe into Blaine’s personal life, even appearing to agree to a date with him, only to instead publish a damning expose that details Blaine’s criminal history to the world. This very nicely cements Al as a surprise antagonist for pretty much everyone, even the city at large, since her report on Blaine results in brain transit being halted. This once again seems to destroy Blaine’s business, while also again imploding Blaine’s latest opportunity to try for something better than the criminal path he seems to keep being forced into.

Al’s piece also ends up having big consequences for each of the characters in their own ways to boot. Peyton ends up professionally embarrassed after her relationship with Blaine comes out, right as she prepares to make her case for New Seattle to Washington most notably, and a similar press report also ends up signal blasting the fact that kids with Freylich Syndrome have brains that can create zombie cures, just as Ravi had feared. Blaine inevitably gets ahold of this Freylich brain knowledge before long, just as Liv witnesses Ravi break down, and Major once again gets a fresh excuse to get a whole heap of human/zombie issues on his plate at Fillmore-Graves. It’s just a bad time in general for everyone at this rate, and I have a feeling that Stacey Boss is going to be coming back soon to boot, particularly with Blaine mentioning him by name in this episode, shortly before all of these issues blow up.

Speaking of Major, his Fillmore-Graves agenda actually takes a very interesting turn in this episode, after Major, along with several other Fillmore-Graves soldiers, begin to suffer confusion and memory loss. With Major incapacitated, Enzo thus makes the decision to turn Fillmore-Graves riot gear on humans, after they begin boycotting brain suppliers. The idea that CHICS used Alzheimer’s-afflicted brains to incapacitate Fillmore-Graves soldiers, even temporarily, is actually really clever, and I wish that the show had done more with this, rather than just having it happen in passing, and then moving on from it. Even Enzo’s treachery doesn’t end up amounting to much, since Major just throws him in the icebox. On this note actually, did Enzo seriously think that he would never get caught after betraying Major and Fillmore-Graves’ chain of command so openly? I get that no one knew why Major and the other soldiers were acting strange, but it seems like a risky bet to assume that it can’t be fixed. What was knocking some humans around even supposed to solve anyway, beyond escalating the violence? It just makes Enzo look like a fool, one who’s picking a fight for the sake of picking a fight, and frankly, he deserved everything he got, since he’s just being a violent liability.

Still, “Death Moves Pretty Fast” keeps iZombie’s storytelling moving at a solid clip, presenting especially big consequences for the characters through the press, while also delivering an especially standout Blaine subplot, right before his reputation and business once again spectacularly implode after a moment of vulnerability. The case-of-the-week may have had a disappointing ending, but it was nonetheless a cute and entertaining homage to Ferris Bueller’s Day Off, one that had the added bonus of letting Ravi sub in for Babineaux, which nicely mixed up iZombie’s usual murder mystery dynamic, right after it’s begun to settle back into it. With Al blowing the lid off of Blaine’s past most notably however, and callously wrecking Peyton’s reputation in the process, New Seattle once again feels worse off than ever, especially now that the world is fully aware of the controversial zombie cure, and forces like Blaine will probably not be too fussed with sacrificing morality to get their hands on it!