After its odyssey into space for the entirety of the previous episode, Agents of S.H.I.E.L.D. inevitably finds itself back on Earth for the following offering, namely checking in with one of the sole remaining loose ends from the previous season. Deke Shaw finally makes his return in, “Code Yellow”, an episode that revolves entirely around Deke’s cutting-edge technology startup office getting attacked by Sarge and his cronies. While that’s going on, another mystery also gets the attention of Benson back at HQ, who must enlist Keller and Yo-Yo to figure out what the story is on a mysterious body that Sarge’s crew leave in an alley.

It turns out that Deke’s idea of, “Seeing the world” was a little more liberal and open to interpretation than previously anticipated. Apparently, Deke has given up on that seemingly noble endeavour, and is instead now profiting off of his knowledge of the future, and of S.H.I.E.L.D. technology. Building a cutting-edge VR gaming system based off of the Framework, and beginning the effort to create a permanent, sustainable food supply out of mushroom puffs, Deke has since made himself very rich and significantly famous, complete with a self-absorbed influencer girlfriend, a comical best friend and enabler, and no shortage of forward-thinking Millennials who are eager to change the world. It’s a humourously expected, and yet completely logical turn for Deke’s character, being a well-meaning, but undeniably slippery customer, who isn’t above exploiting his resources to get ahead.

Things obviously go belly up when Sarge pays Deke a visit however, with Deke obviously mistaking Sarge for the late Phil Coulson. After Deke eventually catches on that Sarge is not the real Coulson however, he gets held up, and the rest of Sarge’s crew begin terrorizing the office. It turns out that Sarge is fully aware of Deke being on the wrong side of history, literally, and Sarge’s group appear to be targeting Deke for unknown reasons, possibly because he doesn’t belong in the new timeline that S.H.I.E.L.D. and co. created by averting global destruction at the hands of Graviton during the Season Five finale.

We don’t definitively get any answers yet though, once again, since it turns out that Deke’s best friend is an undercover S.H.I.E.L.D. agent, who delivers him back to Mack and May. This doesn’t stick however, after Deke’s girlfriend ignorantly enters the office, not realizing it’s under attack. Deke thus manages to go back in and save her, surprisingly not incurring the wrath of Mack in the process, though this could be because of Deke’s surprisingly creative thinking in a pinch. After Jaco attacks Mack, shortly after Pax is knocked out during the attack, Deke comes up with the idea to lure Jaco into his gaming room, which incapacitates him by locking him into a mental scenario of being come on to by a virtual Daisy after an alien attack. This was not only a legitimately hilarious and awesome way to incapacitate one of Sarge’s guys, but also offered a standout payoff for Deke’s first proper S.H.I.E.L.D. mishap in Season Six, particularly when Deke offers Mack a 2% stake in his entire company if he promises to keep his mouth shut about the Daisy avatar!

Meanwhile, back at HQ, Sarge kills an unknown, seemingly unremarkable man, and leaves his body in an alley, which S.H.I.E.L.D. eventually recovers. It turns out that the man’s body has sprouted a bunch of mysterious crystals, and after Benson performs an autopsy on it, it’s revealed that a mysterious bird-like alien creature is stabbed on the inside with a mysterious blue blade. Upon removing the blade, the creature gets loose as well. Okay, that might not have been the best move. Granted, I know that the thing definitely appeared to be dead, but our heroes sure pulled the blade out of the creature pretty hastily, and were thus begging for an issue like this to come up. Is S.H.I.E.L.D. always this careless with their containment protocols?

All in all, this led to something that was seemingly inevitable, even if it does nicely cement a potential new threat facing the S.H.I.E.L.D. crew, beyond Sarge and his goons. After the creature flies away, it eventually jets into Keller’s mouth, after Keller attempts to boost Yo-Yo so that she can see into a vent. I’m not exactly sure what Yo-Yo was going to do while peeking into a vent, but obviously, this was merely a way to critically endanger Keller, after he needs to be strapped down, forcing Benson to perform an impromptu operation. Naturally, this doesn’t work however, and Yo-Yo is eventually forced to stab Keller through the chest with the same weird blade from the other body, stopping the creature, right as Keller’s body appears to launch a series of darkened crystals. The way that the show inevitably forced Yo-Yo to put down Keller is a little predictable, especially when sticking Yo-Yo, a speedster, up in a vent was a pretty stupid idea to begin with, but I suppose this does at least provide a convenient excuse for Yo-Yo to re-address her romantic tension with Mack, which we could all imagine was coming anyway. 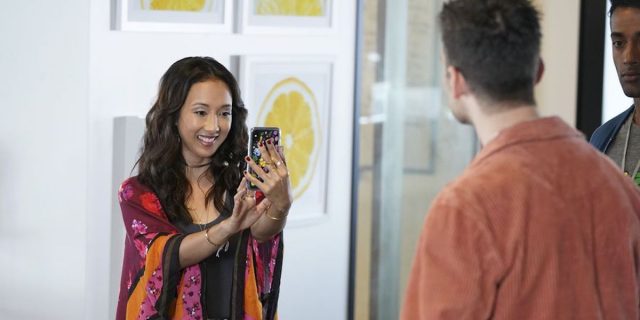 Overall though, “Code Yellow” is another superb episode of Agents of S.H.I.E.L.D., one that provides a highly entertaining return for Deke, while also presenting another interesting new dimension to the Sarge mystery, even if it’s at the cost of Keller’s life. Mack and Deke capturing Jaco and Pax puts S.H.I.E.L.D. in an interesting detente with Sarge as well, after Sarge and Snowflake manage to capture May in the closing moments of the episode. If these weird alien bird parasites are the real danger to Earth at this point, perhaps this will force S.H.I.E.L.D. and Sarge’s crew to finally open up to each other about the real threat in their midst, though I still wouldn’t rule out Sarge as an equally dangerous villain at this point. I am however very happy to see Deke returning to Agents of S.H.I.E.L.D. in style, inevitably sticking true to slippery form by profiting off of his knowledge from the future. It’s also awesome to see that this season’s core storyline on Earth is continuing to be just as riveting as the misadventures of the rest of the S.H.I.E.L.D. crew in space, hopefully once again allowing both story perspectives to come together again in the following episode, now that some dangerous aliens appear to have once again made it to S.H.I.E.L.D.’s home turf.