After renewing emphasis on its procedural format with the previous episode, iZombie stayed on pretty much the same gear with, “Death of a Car Salesman.” Bringing forth another novel and interesting case-of-the-week, one that once again sees Liv and Ravi teaming up for an unlikely crime-solving pairing (only this time without having to bench Babineaux in the process), “Death of a Car Salesman” centers around the suspicious death of a sleazy car dealer, and you can imagine that this leads to an especially fun brain scenario. At the same time, government delegates visit New Seattle, just in time for the next step in Martin’s mysterious zombie fanatic plan.

Seeing Liv and Ravi quite literally share a brain with the latest case-of-the-week, turning both of them into aggressive, under-handed salespeople-types, is pretty hilarious, and easily makes iZombie’s most recent murder mystery even more entertaining than usual! Setting the case amid a backdrop of a police raffle is also pretty inspired, as Liv and Ravi constantly get distracted by trying to sell raffle tickets in order to win a mountain bike, much to Babineaux’s exasperation. The episode concluding this running gag with both characters tying, and having to share a mountain bike that they don’t want, is also an amusing and fitting final result. The brain hook really was great in this episode, and I’m especially glad that it lined up with Ravi’s, “Monthlies”, so it wasn’t just Liv who got to savour the kooky brain fun here! 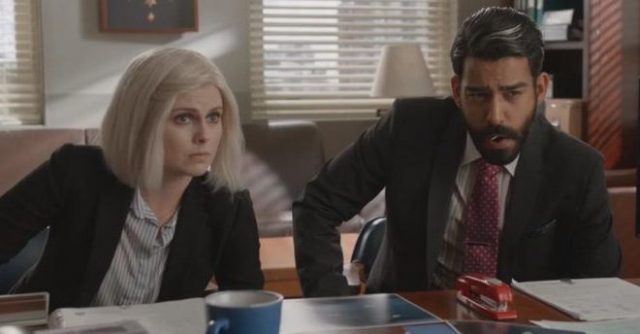 This week’s case was also pretty sharply written for the most part to boot. The idea of having to deal with a, “Snake pit” of underhanded salespeople, all of whom vying to both keep their jobs, and win a super valuable self-driving car, made for an especially unique motive, even if it once again leaned into the idea of everyone subtly resenting the victim, as with the previous week’s iZombie offering. There were a solid amount of turns and red herrings too! Disappointingly though, the show’s recent recurring tendency to fumble the culprit of its cases-of-the-week was once again an issue here. It turns out that the killer is a disgruntled former employee who studied his teenage daughter’s coding books, which somehow allowed him to hack a super-car, and send the murdered salesman off of a bridge in his self-driving vehicle. Yeah, needless to say, this doesn’t really add up, and makes for a lame killer reveal. This episode admits that the killer doesn’t even own a smartphone to boot, which begs the question of how he can understand technology well enough to hack a cutting-edge car, but not enough to understand a cellphone. Like I said, it doesn’t feel all that logical of a turnout, and that’s a let-down.

Still, Liv also managed to headline an especially great subplot beyond her latest murder case in this episode, as she starts making an effort to reconnect with her long-lost father. Martin is naturally revealed to be the mysterious, “Beanpole Bob” during a series of flashbacks too, proving that he was actually the one who accidentally created the zombie virus five years ago! Despite Liv learning that her father is also a zombie, the two seem to share a nice, uneventful walk in the park regardless, but after Liv sees evidence that Martin is continuing to use Utopium, she walks away in disgust, seemingly agreeing with her mother that her father wasn’t worth seeking out. Inevitably though, Liv can’t help but try and reconnect with her father anyway, eventually motivating her to help him seek out rehab centers. This testament to Liv’s incredible goodness as a person was great, but it could also create an issue for her soon, since the episode ends with Martin continuing to oversee his mysterious plans for his radical zombie terrorist cell. Martin subtly implies that he’s somehow using Liv as well, inevitably playing into his implanting of his spy, Riley, who continues to hide within the ranks of Liv’s Renegade operation. Just what exactly is Martin up to? 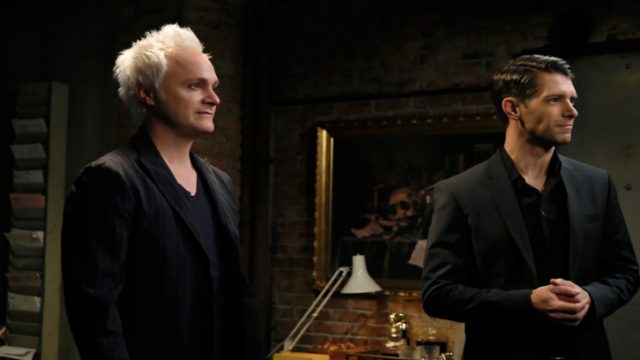 Obviously, nothing good, as demonstrated in another subplot with Major. As Major welcomes the government delegates, just in time for the online premiere of, “Hi, Zombie!”, the fictional zombie sketch program, it quickly becomes evident that government officials are getting antsy to solve the zombie problem in the worst way. Despite Major and Peyton pitching Vivian Stoll’s old ‘Zombie Island’ solution to the government delegates (remember that?), General Mills says in no uncertain terms that New Seattle is going to get nuked at the rate it’s going, particularly since Major failed to produce Mills’ missing daughter, as promised. Another inspired curveball ends up coming into play here though, as Martin’s zombie agent, Spud scratches a medical examiner, who then scratches select government delegates, including General Mills, telling them to await further instruction. With zombies now implanted within the U.S. government, Martin’s plans clearly have a very wide reach, possibly putting the whole country, if not the world, at risk of a zombie pandemic! That may not necessarily be his entire endgame, but it’s sure looking like that’s exactly what Martin wants to do at this point; Completely subjugate humanity, and turn the world over to zombies, as the future of human evolution.

Speaking of evolution, Blaine naturally begins preparing several criminal underlings to begin seizing teenagers with Freylich Syndrome, while also deciding to stash Darcy at The Scratching Post, now renamed to, “Don E Be Goodz” by the new bar manager’s namesake. Blaine amping up his efforts to seize back his criminal empire is inevitable and exciting on its own, though again, the forced romantic storyline with Don E. doesn’t quite feel like it’s working. Apparently, in another mother-of-all-coincidences, the murdered matchmaker from a couple of episodes ago seemingly had Darcy in mind as Don E.’s perfect match, which begs the question of how young Don E. is, or how loose the expectations of that matchmaker were, but whatever. The idea of Don E. possibly being an unlikely means through which Darcy can live out her last wishes is kind of interesting, but their romantic relationship feels incredibly forced. Don E. being lonely just hasn’t been much of a thing on iZombie at all, and feels like it’s coming out of nowhere. Moreover, I kind of get Darcy wanting to get down and dirty before she buys the farm, but does she really think that Don E. is the best she can do?

Even if that Don E. love story is floundering a bit at this point, “Death of a Car Salesman” nonetheless keeps iZombie moving at a pretty entertaining clip. Despite the case-of-the-week resulting in yet another let-down killer, the case progression beyond that was at least a ton of fun, especially considering how effectively and amusingly Liv and Ravi played off of each other, and Babineaux, while on sleazy salesman brain. Seeing more of Martin’s plans for a zombie takeover unfold is also proving to be pretty exciting, particularly now that he’s created zombies within the American government, which is bound to give Martin a decisive edge in the coming battle against humans and zombies. Major may still be managing to hold everything together through what remains of Fillmore-Graves, but despite his recent victories, it once again feels like he could be fighting a losing battle. Perhaps Liv can talk her father down from something with terrible global implications, but just as Liv had to question the situation when she discovered her father’s continued addiction to Utopium, one also has to wonder if Martin is just too far gone to reach by this point.