NOTE: This review may contain some mild spoilers for Netflix’s fourth season of, “Lucifer.” That said, the review is written to accommodate those who have not yet watched the season, and as such, will avoid discussion of major plot developments.

It turns out that you just can’t keep a good devil down. After FOX initially cancelled Lucifer in 2018, following a mostly well-received three-season run, the series’ devout following of fans unleashed an online uproar worthy of Hell itself! It turns out that this Vertigo/DC graphic novel-inspired crime procedural dramedy series struck a huge chord with its devout audience, despite declining live/same-day ratings during its third season, and this quickly spurred Warner Bros. Television, having freshly regained the Lucifer TV license after FOX cancelled the show, to try and revive it under a new platform. This quest became all the more desperate when one considers the massive cliffhanger that Lucifer’s previous third season had ended on as well, shortly before FOX cancelled it, wherein the title character’s detective partner, Chloe Decker finally saw Lucifer’s true face, realizing at long last that Lucifer truly is the Devil himself!

Fortunately, after some shopping around, Lucifer was ultimately revived for a fourth season on Netflix, allowing fans of the show to witness the fallout of Chloe finally seeing the truth about her LAPD sidekick, which FOX had formerly denied them. Lucifer will nonetheless still officially end with its fifth and final season, which is planned to debut on Netflix at some point in 2020, but for now, Season Four presents ten all-new episodes, most of which deal with the revised dynamic between Lucifer and Chloe, now that Chloe is fully aware that her crime-solving partner really is the Prince of Darkness, as he always claimed he was. Despite FCC restrictions now being thrown off of Lucifer as well, since Netflix Original shows are generally free to include as much cursing, sex, drug use, nudity and wanton violence as they see fit, the series nonetheless stays pretty true to the tone and style that was maintained throughout its first three seasons on FOX. Some minor exceptions to this rule however include characters now being able to be depicted smoking, characters now being able to say, “Shit” and its derivatives periodically, and characters now being able to display their naked rear ends, none of which was possible on FOX. 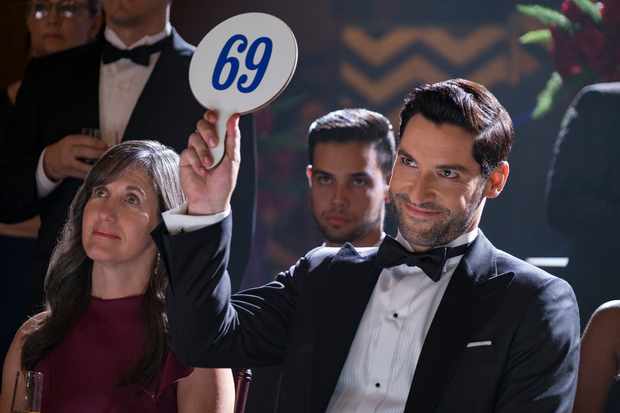 Outside of that though, Lucifer’s Netflix-exclusive fourth season stays on much the same gear as the previous three, though this fortunately means that fans are getting more of the recognizable content that they already love. This specifically means that there’s virtually no change to the show’s writing foundation in Season Four, which still includes a new murder case for Lucifer and the LAPD within every episode, along with divine drama providing an over-arching season-long threat beyond the human killers of each episode’s whodunit, and even abrupt cuts to black that simulate commercial breaks, despite Netflix shows not having commercials. For established fans, this means that the show’s transition from FOX to Netflix is pretty seamless for the most part, with Season Four feeling mostly the same as it probably would have been if FOX had hosted Lucifer’s fourth season itself, at least outside of Netflix’s reduced ten-episode count. If you’re not already part of the Lucifer faithful however, there’s also not much in Season Four that can truly convert you, by the same token, especially with the show opting out of making itself darker and properly R-rated for its move to Netflix.

If you do already love Lucifer though, then don’t be dismayed by the fourth season’s shortened episode count. The ten-episode season means that many of the filler plotlines and throwaway cases-of-the-week, which sometimes cropped up during the show’s second and third seasons on FOX especially, have now been chucked out of Season Four. This allows Season Four’s ten episodes to deliver a quality-over-quantity approach, keeping the storytelling tight, and the pacing exciting. Better still is that Season Four of Lucifer has plenty of exciting story ideas on offer to boot, not just with Chloe now being aware that Lucifer is the Devil, but also between Linda being pregnant with Amenadiel’s divine child, Ella having a crisis of faith in the wake of Charlotte’s death towards the end of Season Three, and a fanatical priest learning of Lucifer’s presence in Los Angeles, and becoming desperate to prevent a prophecy that would see evil begin to walk the Earth, following Lucifer’s abandonment of Hell.

The key narrative hook for Lucifer’s fourth season however is the introduction of Eve, the first woman herself, played here by Inbar Lavi. Lavi’s Eve is a superb addition to the show, being a combination of innocently and comically air-headed, yet perky, courageous and infectiously charming as well. After Chloe is initially driven away from Lucifer by the sight of his, “Devil face”, Eve makes contact with her former divine boyfriend a few episodes into the season, creating a lovably dysfunctional relationship dynamic that once again finds creative and humourous ways to test the LAPD’s patience, particularly when Chloe inevitably returns to duty right from the season’s first episode. There’s a lot of good relationship drama explored here, namely in Lucifer now being torn between two women who appeal to opposing sides of his identity, with one wanting him to embrace being the Devil he was, and the other wanting him to keep working at being an earthly crime-solver and hero to the people. The idea of Chloe being an inadvertent catalyst to Season Four antagonist, Father Kinley, played by fellow Vertigo/DC adaptation, Preacher’s Graham McTavish, is also a great one, creating an especially emotionally-charged fourth season in terms of Lucifer’s character development and drama, while still allowing Tom Ellis plenty of fun opportunities to play up his title character’s overblown ego and comical narcissism.

As much as the core love triangle between Lucifer, Chloe and Eve is pretty great though, as is the threat of Father Kinley, there are other character developments that end up suffering a bit in the shrinking to ten episodes for Season Four of Lucifer. Chief among these is the fact that Eve hand-waves away the fact that Lucifer murdered her son and sent him to Hell at the end of Season Three! Eve not caring about Cain’s death at all, simply shrugging about it when it’s brought up, seems odd and out-of-character for her, especially considering that Eve is supposed to be an over-emotional head case throughout much of the season. Likewise, Dan’s and Maze’s characters also suffer a bit, due to less effective story arcs in Season Four. Maze wanting to be the guardian of Linda’s baby, and being over-protective of Linda while she’s pregnant, makes sense on paper, but the arc eventually leads into a lovesick Maze that takes too awkward of a left turn for her established personality. Likewise, Dan putting his job and reputation on the line numerous times to strike back at Lucifer, whom he inexplicably blames for Charlotte’s death, is sort of an interesting idea, but it really feels like this fourth season didn’t quite know what to do with Dan, because he’s written so inconsistently. Because of this, Dan keeps bouncing between several half-baked story turns, most of which portray him as an unstable moron, between his Lucifer vendetta, an attempt to take out his aggression with Maze, and an eyebrow-raising new romance that feels like it’s simply there to rile up the fans, all of which end up going nowhere in the end.

Season Four of Lucifer also ends on another massive cliffhanger, one that nonetheless seems to anticipate being a potential series finale, though at least now we know that a pre-determined final season of Lucifer is officially planned to hit Netflix in 2020, allowing this beloved procedural dramedy to go out on its own terms next year. The show still isn’t following the Lucifer comic books at all after its move to Netflix either, but by this point, it’s clear that Lucifer is still thriving as its own independent entity, even if it remains far removed from the storylines of its Vertigo/DC graphic novel inspiration. Bottom line, if you’re simply hungry for more Lucifer, then Netflix’s new fourth season delivers just that, while keeping the show pretty damn entertaining to boot. Not every soapy romance subplot in Season Four works, plus some of the murder cases are better than others, as usual, but Lucifer hasn’t lost one bit of its devilish magic in the move to Netflix, even if the show’s return still feels all too fleeting for those who have grown to love it from its FOX run. Like I said though, at least Lucifer is no longer ending on a huge unresolved cliffhanger, and Season Four can begin moving towards the show’s true conclusion in 2020, while keeping the kooky charm of this series going for just a while longer.

Lucifer: Season Four Review
Lucifer's move to Netflix for Season Four doesn't appear to have tarnished the kooky charm of the show, which remains fun and compelling, even as it sticks closely to the established FOX style.
THE GOOD STUFF
THE NOT-SO-GOOD STUFF
2019-08-20
84%Overall Score
Reader Rating: (0 Votes)
0%