Although I’ve never driven a proper dirtbike, I did grow up with a souped up 50cc minibike that got me into a lot of trouble. A gift for my sixth grade graduation, it had been made even faster than its advertised speed by my uncle, and ended up being one of the best presents I’ve ever received. I miss those days, but don’t think I’d have the balance to ride a regular dirtbike these days, especially since it’s been so long. I still carry the love for speed, though, and it’s carried over into video games, where adrenaline-fueled dirtbike and ATV racers have been a personal favourite for decades now.

The latest in a relatively long line of such titles is MXGP 2019, the newest iteration of a Milestone series that’s been around for several years now. As you may know, said franchise takes its name, content, racers and inspiration from a real life circuit, and the same is true of the global track list it offers. However, as is usually the case with such things, the physics and difficulty options are adjustable to allow for accessibility.

Last year I attempted to review MXGP Pro, but was unable to properly play it because of a progression bug that made it impossible to continue after several hours of play. Thankfully, such a thing has yet to rear its ugly head during my hours with MXGP 2019 – a game that I’ve definitely enjoyed more. In my opinion, this is probably the best thing Milestone has released thus far.

Upon downloading this thing or inserting its disc and completing installation, one will find that the core of the experience is a two pronged season/career mode, which incorporates two different speeds and classifications of bikes. The idea is that you complete and win the first one (which is the MX2, I believe), and then graduate to the other. There, in the true MXGP, the bikes are faster, the riders are more skilled and the racing is more challenging. Of course, this mode comes complete with a good amount of teams and sponsors to sign with, as well as licensed gear to purchase and equip your rider with using your winnings. Those things, as well as real-life racers to compete against.

Said season (or career) mode isn’t the most robust ever created, but it’s relatively lengthy nonetheless. Missing are the media days, autograph signings, training and those types of things from the Monster Supercross titles, but those were never that interesting anyways. As streamlined as this option is, it’s sure to interest fans who just want to create a racer and ride alongside some of their favourites. There could certainly be more to it, though.

As someone who doesn’t follow MX racing closely, I was personally disappointed to discover that, unlike in some of the Milestone games it’s impossible to make it so that each event only consists of one race. Perhaps this is an integral part of the competition that I don’t know about, but other sports titles allow you to adjust their settings so that they differ from the norm. It got kind of repetitive, doing the same races over again after completion, since each event required you to place well in two very similar runs. The settings would not allow me to lower this, but they would’ve allowed me to increase things, by setting it so that I’d have to take part in qualification and other race day events, prior to actually racing for keeps.

To seasoned fans, this probably won’t be much of a complaint. However, it does get pretty repetitive, and sucks some of the fun out of the game.

Outside of that, the racing was pretty fun, although I found it better suited for short bursts of play than longer sessions. The bikes felt fast, the riders felt as if they had more weight to them than ever before, and the competition could get pretty difficult depending on the difficulty setting. The Milestone games I’ve played and reviewed have generally been fun, but none have ever been as polished as this one.

During my time with MXGP 2019, I attempted using the more realistic physics, but mostly stuck with the more accessible ones. I wasn’t exceptionally great at the game, and using those made it a lot more accessible, whereas using the realistic ones made it a lot easier to fall. They also made me need to rely on the rewind feature (which can be turned off) more. Longtime fans may like those best, but I prefer my racing to be fast, fun and more on the arcade side.

Season mode isn’t the only option to be found here, as it’s also joined by time trials, online racing (which I couldn’t access), and a new playground featuring waypoint races and other trials. There was also a full bike and rider customization menu, although it’s mostly for use outside of season mode. You’re generally locked in as to what jersey you can wear then, although it’s possible to buy and change your boots, goggles, neck brace and helmet.

Through the new waypoint mode, players can take to the muddy playground and challenge both themselves and others to events of their own creation. This includes checkpoint races, narrow path challenges, and an event where riders see who can pick up the most collectibles. It’s also possible to combine all three into what’s called the ‘Magnum Opus,’ and is considered to be the ultimate challenge.

For the first time in MXGP franchise history, fans can even create their own courses using MXGP 2019‘s new track creator. Offering different environments, like the woods, desert and riviera, it’s a solid addition to a pretty good game. In comparison to some of the previous track editors I’ve used in other Milestone games, it’s definitely an improvement, and probably their best to date, even if I sucked at creating my own courses. This feature extends the game’s life cycle and adds to its replayability, and will apparently be bolstered by new content after launch.

On the presentation front, things have taken another step forward. The menu is colourful, but artsy, featuring the player’s created rider over top of  a white background. The rider takes up a large portion of the screen, and is presented in a stylish way. The rest of the game also uses some dynamic and surprisingly retro fonts to present its menu offerings and introduce its global tracks, of which there are quite a few. Each season has approximately 18 events, and they all take place on different courses set throughout the world. All are pretty well crafted and represented, too, with a nice attention to detail. 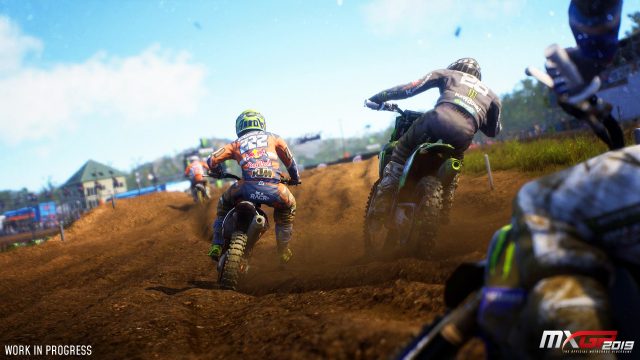 The gameplay looks and sounds good, offering the best audio/visual experience of any Milestone game I’ve played thus far. There are still areas needing improvement, such as the animations, but the team deserves credit for the improvements they have made to make this thing feel more fluid and realistic. It often looks like the bikes are sliding around corners and on the rough surfaces, though, and the riders’ animations generally don’t change a lot while they’re riding. These aren’t major things, though.

There isn’t much in the way of music, nor is there any voice acting. Most of the sounds you’ll hear come from the bikes, themselves, as well as the ever-changing terrain they’re tackling, which quickly becomes scarred by ruts. The only real music I heard came in the form of instrumental rap and rock, which played during loading screens and did so loudly. Only the beats were ever present, and that wasn’t necessarily a bad thing. The music wasn’t great, but it was fine and better than expected.

In the end, MXGP 2019 is a pretty solid addition to the series, and one that offers the best racing experience of any Milestone game I’ve played. It’s a definite improvement over last year’s outing, as well as those which have come since. If you’re a fan of MXGP racing, or simply enjoy games of this ilk, it’s worth looking into.

This review is based on the Xbox One version of the game, which we were provided with by the publisher.

MXGP 2019 Review
MXGP 2019 is an obvious improvement over the previous game, as well as the other Milestone offerings that have been released since. It's more polished, more realistic and more fun than any of their other games, but still has room for improvement and is held back from being great by those things.
Visuals74%
Audio72%
Gameplay74%
The Good Stuff
The Not-So-Good Stuff
2019-08-27
73%Overall Score
Reader Rating: (0 Votes)
0%