It’s been a while since games attempting to deliver the experience of a fairground demolition derby were commonplace, but that doesn’t mean there isn’t still interest, or a market. Such titles may not be released that often anymore, but there are thankfully still developers who have interest in creating such experiences.

The latest to enter the dangerous and exciting realm of adult bumper cars is Bugbear’s Wreckfest; a game that originally debuted on PC through Early Access, but has just made its way to consoles after a bit of a wait. If the developer’s name is familiar to you, it’s because they’ve been around the racing circuit for quite some time. They’ve been responsible for such titles as FlatOut, FlatOut 2, FlatOut: Ultimate Carnage, Ridge Racer Unbounded and SEGA Rally Revo.

At heart, Wreckfest is an arcade racer with heavy demolition elements. We won’t refer to it as just being a demolition derby game, because that would be selling it short. No, while there are a good amount of demolition events to be found within this game’s career, there are even more that pertain to more traditional, albeit arcade, racing. The difference between this and a more typical racer, though, is the fact that one of your goals is to try to knock opponents out of competition, by ramming them, bumping into them or knocking them off course. If you can do so, it’ll definitely help your cause, provided that you don’t forget to race at the same time. Doing both can often be difficult, as this is not an easy game by any means.

All of the above boils down into a violent, chaotic, and debris filled racing game, where one’s car may barely be road worthy by the end of a single event. How much this affects your gameplay experience depends on the settings and difficulty you employ, though, because unless you’re completely knocked out of competition (which happens after your vehicle is destroyed to the point of inactivity, and loses all of its listed health), you’re generally able to compete, at least on the lower difficulties. You’ll certainly have to learn to deal with wreckage, and watch your six, though, because the other racers will never be friendly. This is especially true of other humans, some of whom love to drive the wrong way on purpose, just for shits and giggles. Then again, some of the tracks force you to deal with oncoming traffic, because they’re designed in ways that promote such things.

Wreckfest is made up of a career mode, a multiplayer suite, a garage and the ability to set up one’s own exhibition events.

The best way to describe the career mode is to say that it’s reminiscent of the ones found in the mainline Forza games. There are several different tiers, ranging from amateur regionals to championships, and each one has a list of different events that one can undertake. They’re all displayed in visualized panels, and aren’t all required for completion. You can pick and choose which ones you’d like to tackle, and as long as you earn a set amount of points, you can progress to the next tier without completing everything in the previous one. Each tier has a listed point requirement, and every event (which can be comprised of one race or demolition derby, or perhaps even four different races with cumulative leaderboards) offers a different amount of points based on its longevity and type. 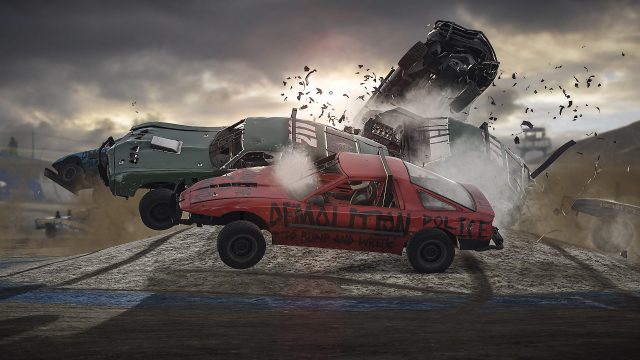 There are also stars to win by completing challenges, some of which are easier done than others. All that really needs to be said here is that the game likes to up the ante a bit, by asking you to go the extra mile and take out opponents, spin a few out or that type of thing. Stars offer extra points, but aren’t a necessity, like getting on the podium usually is. Most races want you to get first, while derbies often ask for a few take downs.

Being that this comes from the creators of FlatOut, it’s not surprising that some of the events take on a very creative form. There are riding lawnmower races, bus avoidance challenges, and even couch racing. Yes, you read that right: You get to race others while riding on a couch with some sort of propulsion system attached to it. It’s tough to control at times, but fun and unique nonetheless.

Later on in the game, you’ll also see other types of vehicles that don’t normally factor into racing games, like RVs and combines. These will appear in multiplayer, too, and can create a lot of chaos.

Through progression, more cars and vehicle types will become available for both collection and purchase. To compete, you’ll also want to make sure to upgrade your favourite chassis as much as possible, though that will take time. Reason being is that part upgrade unlocks are tied to the player’s level, and it can take some time to get to those plateaus. When I looked at what was available for my first car’s engine, I believe it told me that I needed to wait until I was level 25 before I could upgrade it. That wasn’t the case for all parts, though, as some became available relatively quickly, and upgrading certainly helped me stay current.

Speaking of that, it’s important to highlight how Wreckfest is not an easy game. I know that I quickly noted it earlier in this review, but it’s true. Even on the easiest driving and AI difficulties there’s still a pretty decent challenge to this thing. It was something I was aware of, and was honestly worried about because I’m not the best at racing games. I’m good, but not amazing, and sometimes they can be quite difficult. Wreckfest is more accessible than some, though, and is something that gets easier as you progress and get used to its physics, which aren’t exactly of the drift heavy variety. These vehicles have weight to them, and some move like tanks.

Unsurprisingly, the vehicles featured within this game are not licensed, meaning you won’t get to enter a demolition derby with your favourite General Motors, Dodge or Ford. Some are pretty similar to ones from real-life, but not exact. Surely this is because vehicle manufacturers are hesitant to license their cars to games where they’ll be destroyed. They also tend to be kind of worrisome about doing such things for games that feature dangerous racing.

I would never begrudge Wreckfest for this, nor do I think that it should be criticized for it. The vehicles are more than fine, and are quite detailed. They do not need to be licensed or real. In fact, I kind of like that they’re not, because it’s allowed the developers to deliver some rather impressive damage modeling.

Although the career mode is arguably this game’s biggest draw, some may favour the online realm over the single player one. I spent some time playing said multiplayer with friends, and quite enjoyed myself. The racing was fast, fluid and furious, and the trash talk that resulted was also great. This is the type of game that is made for friends who like to play together and get under each other’s skin as they do so. It helps that this particular one has lots of different options on offer, along with many different types of vehicles and tracks that can be quite dangerous. 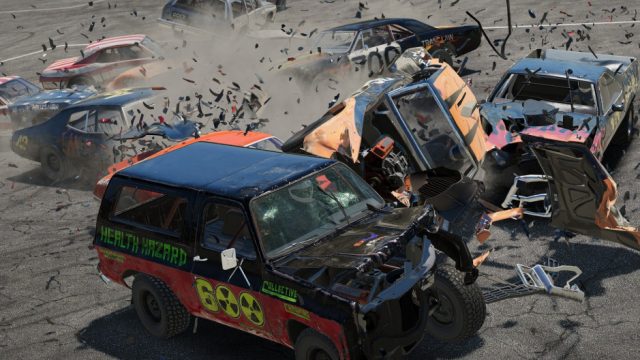 There’s also the aforementioned garage to tinker within, and that’s where you can go to upgrade your owned vehicles, change their paint jobs or add a livery. As someone who’s not very creative, I haven’t spent a lot of time worrying about those latter things. Don’t expect anything as in-depth as what you’ll find in Forza or Forza Horizon, though.

For the most part, Wreckfest controls and plays pretty well, although its controls and physics aren’t as tight as they are in the aforementioned titles. Then again, those are triple A games, and are different from what’s on offer here. This is meant to be a more destructive, arcade style affair, and it delivers. I won’t lie and say it didn’t take me a bit of time to get used to the cornering, and get better at the game, but that’s not exactly abnormal.

In terms of presentation, this happens to be a bit of a mixed bag. I’ve never had a chance to play Wreckfest on PC, so I cannot compare it to the console version(s), but for the most part things do look good here. The environments are colourful and pretty realistic looking, and the vehicles are rather well detailed and crumple really impressively. There were some issues, though, including long load times and a bit of a grid effect that I noticed as I sped through different tracks and environments. The only major problem with the visuals, though, is some sort of odd pixelation bug that kept occurring at the bottom of the screen during menus and pre-race screens. It wasn’t massive, but was large enough that it looked like a shape made out of large, discoloured squares or pixels, which clumped together in a strange arrangement that kind of resembled an ugly L. They’d flash brown and gray.

Hopefully a patch can get rid of this anomaly soon, because it’s ugly and takes away from a good game. From what I’ve heard, it’s also a common experience, at least on Xbox One.

The sound is fine, but unspectacular. The volume fluctuates, and the mixing could’ve been better. Races are sometimes quieter than the rest of the game, and the music can be difficult to hear over the engine sounds, or vice versa. I messed with the volume settings a bit, and it’s gotten better, but it’s still not great. That said, it’s also far from bad, and should not deter you from buying or playing this game. The mixing isn’t a massive problem.

There is a licensed soundtrack, although I don’t think I’d heard any of the songs, or heard of any of the bands, before playing. Then again, that’s likely because they’re not exactly famous or commonly played. Most of the songs would likely be classified as nu-metal or hard rock, and their quality was pretty hit and miss. I didn’t mind listening to most of them while racing, and enjoyed some of them, but I also tend to listen to heavier music and didn’t expect a whole lot from a game like this when it came to music. My colleague, on the other hand, commented on how much he hated it.

At the end of the day, Wreckfest is a game that wears its heart on its sleeve and doesn’t attempt to deceive anyone. What you see is what you get, and that’s more than fine. With this racer, Bugbear has delivered something fast, fun, frenetic and communal, which is not only an enjoyable (albeit occasionally frustrating) single player experience, but also a fun and hilarious multiplayer one. So, if you’re looking for this type of steel bashing experience, it’s well worth checking out.

Wreckfest Review
Wreckfest isn't afraid to be what it is, and doesn't shy away from being itself. The result is a racing game that delivers fun, chaotic and no-strings-attached gameplay, which is heavy on damage and destruction.
Visuals71%
Audio59%
Gameplay80%
Storyline0%
The Good Stuff
The Not-So-Good Stuff
2019-08-29
80%Overall Score
Reader Rating: (0 Votes)
0%