After taking a surprisingly straightforward trip into the past, Legion returns to its usual weirdness and unpredictability, following the time travel by David and Switch having pretty big consequences. “Chapter 23” unleashes yet another new threat on the Legion universe, as David’s forcible meddling with time through Switch causes the Time Eaters, the demon-like creatures that Switch must avoid provoking every time she uses her powers, to be unleashed on reality at large. This ends up having all sorts of strange effects on the show’s leads, as time is literally fed on all around them.

While it’s quite eccentric, the coming of the Time Eaters allows some more action to make its way into Legion, with some very creative choreography to boot. Since the Time Eaters exist outside of time, they move in stalled, jittery style, and play with the environment in ways that make them constantly unpredictable and terrifying. The creepy laughter and subtly aged objects nicely tease when a Time Eater is about to attack, and the constantly unpredictable time anomalies really are fun to watch as well. As cool as the Time Eaters are though, they’re still stuck in a bit of a weaker Legion episode nonetheless, sadly, since their coming amounts to a surprisingly disposable storyline, one that doesn’t end up having as big of an impact on the show as it could have.

Compounding this issue is the fact that Syd speculates that the Time Eaters being unleashed is how David destroys the world. This could have been a very interesting scenario, one that doesn’t quite paint David as either a hero or a villain, but a misguided and mentally damaged lost soul who is simply trying to fix his own torment, and ended up taking the world down with him in the process. That could have been a very interesting conclusion for Legion, which does appear to want to portray David Haller as an ultimately tragic character, one who has been given god-like powers, without the mental fortitude to properly wield them for noble ends. In the end though, David spends most of this episode simply walking into the Time Eaters and being warped away from them, like a dope, until he finally sets one of them on fire, and tells the rest to leave… And then they just leave. Seriously? Talk about an anti-climactic finish…

Before that disappointing result though, the Time Eaters at least wreak plenty of havoc, separating the characters into several subplots, all of which explore various effects from David’s meddling with time. The best among these is Syd’s subplot, wherein she finds Division 3’s airship suddenly empty, and subsequently locates a displaced teenage version of herself. Syd trying to assure her teenage self about the future, while also getting a fresh reminder of the toll that her past has taken on her, made for some highlight drama that nicely punctuated the rest of the chaos caused by the Time Eaters. The teenage Syd turning out to be a Time Eater trick was also pretty great, with Syd once again being punished right as she opens her heart to the idea of real love. Again though, it’s a shame that the Time Eaters are ultimately dispatched so easily, ensuring that Syd being cornered by one of these monsters is quickly rendered pointless. 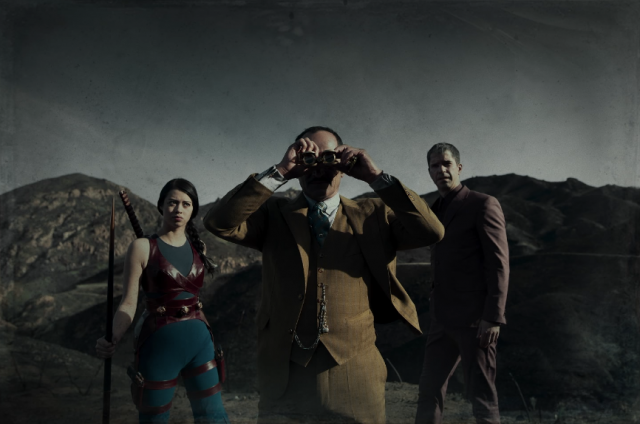 Fortunately, the other subplots provide a good chunk of excitement, particularly one surrounding Kerry, Farouk and Clark, who move into a space between time to avoid the Time Eaters, which unfolds like something of a slideshow. This creates effective doses of humour and excitement, as various still images detail how these three characters try to survive, and formulate a plan. The Time Eaters find them anyway as well, but this at least allows Farouk and Kerry to take out a couple of them, before David scares them off, and the three presumably return to the real world. Another similarly exciting subplot, albeit one with a less effective turnout, is Cary making contact with Switch, and the two being warped to Division 3 with some help from Ptonomy, and the Time Eaters’ influence. This mostly served as a transparent excuse to get Switch over to Division 3 without hassle, and frankly, it felt rather contrived, even by the standards of what’s going on. Still, I guess we had to come up with some excuse to once again pit David against Division 3 after this.

Other developments like Salmon, as well as Lenny’s ‘child’, being thanklessly wiped out of time, rendering Lenny’s entire story arc for this season pointless for the time being, plus David getting a brief chance to interact with his mother as another Time Eater deception, also fail to make the narrative impact that they could have, due to the Time Eater trickery ultimately being wrapped up too cleanly and quickly for it to make much of a difference. “Chapter 23” at least sets up some good story threads for later, particularly once David realizes that Cary got away with Switch, and is now fully ready to declare war on his former friends, but for now, the Time Eaters’ attack on reality merely ends up feeling like a minor nuisance, rather than something truly calamitous for the world at large. Perhaps this isn’t the last we’ll see of these monsters, but considering that Legion only has a few episodes left in its run, it needs to start having more lasting dramatic stakes, rather than the throwaway diversions that the show currently appears to be getting lost in.

Legion 3.4: "Chapter 23" Review
Legion delivers a cool, but disappointingly disposable attack on time in, "Chapter 23", as David's and Switch's attempt to change the past ends up having significant consequences.
THE GOOD STUFF
THE NOT-SO-GOOD STUFF
2019-09-26
75%Overall Score
Reader Rating: (0 Votes)
0%