The battle against Izel, and now Sarge, continues in the second episode within Agents of S.H.I.E.L.D.’s two-episode sixth season finale event. “New Life” begins with May being impaled on Sarge’s sword and kicked through the portal to Izel’s world, Daisy, Yo-Yo and Mack all being cornered by Shrike zombies on the Zephyr, Deke being unable to reach anyone while hiding in the Quinjet, and Fitz and Simmons facing an all-new problem at the S.H.I.E.L.D. base. The momentum was already pretty strong during the first season finale episode, and fortunately, the second season finale episode proves to be just as relentlessly exciting and enjoyable, capping off Season Six of Agents of S.H.I.E.L.D. with a thrilling and spectacular finish!

It’s bad enough that Fitz, Simmons and everyone else at S.H.I.E.L.D. HQ had to see footage of May being stabbed and thrown into a portal on a live feed, but it turns out that May’s supposed demise is the least of their worries! Right after May’s tragic fate is shown to everyone, a bunch of Chronicom Hunters warp into S.H.I.E.L.D. HQ, immediately hijack all of the technology within it, and start eradicating all personnel that they can find! Fitz and Simmons manage to flee with several other S.H.I.E.L.D. employees, managing to go to the emergency floor, per protocol, only to discover that all of the agents on the floor have been killed by the Chronicoms already. This is when Fitz and Simmons realize the horrible truth that the show has been foreshadowing for a few episodes now– The Chronicoms know what’s in their minds, and that in turn reveals to them all of S.H.I.E.L.D.’s research and technology secrets!

Once Fitz and Simmons break off from the other staff members, leaving them with the handful of agents that are still alive on the rescue crew, they find their way to the mental tech, and resolve to destroy it. This actually makes for a pretty dramatic moment, since Chronicoms have boxed Fitz and Simmons in, making them believe that they have to blow the room up with a grenade and sacrifice themselves. The Chronicoms even enter the room before the grenade can explode… Before one of the other Chronicoms, the one that previously attacked Enoch, kills all of the other Hunters! It turns out that this is Enoch in disguise, who overpowered and killed his former Chronicom friend off-screen, and he needs Fitz and Simmons for a special job, once again throwing the natural course of their lives off-track. I do have to say that Fitz and Simmons basically rolling their eyes and declaring out loud that this is now old hat to them is pretty hilarious too!

With S.H.I.E.L.D. HQ out of commission however, this leaves everyone in the field without essential support, just in time for Izel and Sarge to seemingly win, successfully opening a way for their race of energy beings to come to Earth and conquer it. Fortunately, S.H.I.E.L.D.’s agents haven’t lost yet though, as Mack coaches Deke on how to fly over to the rest of the agents on the Quinjet, before they all storm the temple, in one last desperate bid to stop Izel. Shortly beforehand however, Yo-Yo gets infected by a Shrike, creating yet another intense ticking clock! With Deke thus playing defense and holding off Shrike zombies, Mack, Yo-Yo and Daisy make it to Izel and Sarge, with Sarge having now pretty much fully reverted back to being Pachakutiq. This sets the stage for a pretty thrilling final battle for Season Six, particularly when the three monolith gateway stones are thrown out of the portal, seemingly preventing the Shrike from properly assuming their own physical forms on Earth!

It turns out that life and death don’t operate on the same rules in Izel’s world, meaning that May survived being impaled on Sarge’s sword, pulling it out of her, and taking out the aliens that were trying to open the way for the rest of Izel’s race. This seems pretty convenient, and more on that in a bit, but regardless, this interestingly sets the stage for May and Izel to have a prolonged sword fight, while Daisy and Mack try to desperately hold off Sarge/Pachakutiq. All the while, Yo-Yo continues to get sicker, and is about to turn, right before Izel finally appears to defeat May for good… Until May stabs Izel from behind via the portal! This destroys Izel for good, while also conveniently killing the Shrike infecting Yo-Yo, thus sparing her a fate worse than death. Since May is back in the real world however, her injuries return, leaving her mortally wounded, right as Mack also takes the sword and destroys Sarge/Pachakutiq for good as well.

May being faced with the harsh reality that Sarge was not truly Coulson, and how her trust ultimately cost her her life, could have been a very impactful and emotional way to kill off her character… Though once again, she’s bailed out with a Deus Ex Machina, namely Simmons, now appearing older and with more manpower and hardware. Simmons gives May a magical healing serum, while also storing her in stasis, which basically begs the question as to why the show bothered acting as if May was going to die in the first place. If May was going to be able to fight Izel just fine in her world, not to mention kill Izel through the portal, then why was May even injured at all? Sure, Yo-Yo being infected by a Shrike is pretty easily undone in turn, but at least Yo-Yo was appropriately disabled during the infection, and at least this allowed both Daisy and Mack to face down the possibility of losing even more people, particularly after believing that May had already been lost. 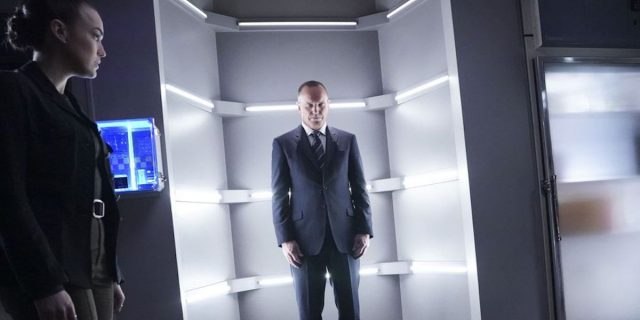 Fortunately, Simmons’ mysterious circumstances create a very promising tease for Agents of S.H.I.E.L.D.’s seventh and final season that’s set to air next year, when she reveals that she, Enoch and Fitz have appropriated their own time travel technology, in order to try and devise a solution to the Chronicoms invading Earth, and wanting to convert it into Chronica III. Not only does this mean bringing Daisy, Mack, Yo-Yo and the unconscious May to Prohibition-era New York, but it also means that Simmons has ultimately surrendered to the need for a S.H.I.E.L.D. history expert, the best there ever was; Phillip J. Coulson! Since Coulson is obviously dead, and Sarge has been destroyed however, this means constructing an all-new Coulson, one with all of the memories of the actual Coulson, while also being upgraded to know about everything that happened over the course of this past season. Yep, Coulson is now a super-advanced, Chronicom-style LMD, and he’s back again, just in time to join S.H.I.E.L.D. as the new right-hand man of director, Mack!

For now though, the Sarge mystery certainly was good while it lasted, and Izel was certainly a worthy threat for S.H.I.E.L.D., even if many of their losses were ultimately undone. I also have to wonder if Enoch’s newest time travel escapade is yet another convenient way to take the Agents of S.H.I.E.L.D. characters out of mainline Marvel Cinematic Universe canon though, so they no longer have to worry about having to work around universe-affecting events like those in this past April’s Avengers: Endgame. Whatever ends up happening during next season though, “New Life” provides a fittingly exciting and satisfying conclusion to the battle against Izel and the Shrike, while handily wrapping up the Sarge mystery once and for all. It’s bittersweet to think of Agents of S.H.I.E.L.D., the first MCU television series, taking its final bow next year, but at least the show appears to be going out on its own terms, not to mention the fact that it still remains at the top of its game, even with a Summer placement and a shortened episode count!