With Mack and Yo-Yo being held captive by Izel, and the monolith energies having been used to warp Flint to the new present-day timeline for Earth, every ingredient is in place for a total takeover of the planet by the Shrike! Having no time left, S.H.I.E.L.D.’s forces have to mount up and stop Izel once and for all, before the planet is enslaved by the Shrike, using whatever limited resources they have left to do so. The climactic battle against Izel thus unfolds across a two-part season finale for Agents of S.H.I.E.L.D., beginning with, “The Sign”, which comprises the initial race to stop Izel, before she can conquer the planet with the Shrike.

The first part of this two-part season finale fortunately ends up being pretty exciting as well, providing non-stop thrills, as S.H.I.E.L.D. desperately tries to formulate a plan of attack. This is carried out on multiple fronts, with Mack and Yo-Yo trying to figure out how to escape the temple with Flint, while May, Daisy and Sarge try to push their way into the temple themselves, fighting through numerous Shrike zombies to do it. Fitz, Simmons and Deke meanwhile try to devise a way to provide support from a distance, and deliver technology that could prevent Izel from utilizing her usual possession tricks. Izel however maintains the upper hand at the temple, possessing Flint, and easily using his Inhuman powers to re-form the three monoliths. Well, so much for the monoliths’ intense destruction effort last season…

May, Daisy and Sarge are left to push a storyline that mostly provides pure action, landing near the temple, taking out Shrike zombies in droves, and this manages to work pretty well. The three are even outfitted with special Shrike-killing bullets, created from melting down and re-forging Sarge’s supply of daggers, which is a pretty creative and cool idea, to the point where Sarge expresses surprise that he didn’t think of it himself. That said, a bit of narrative drama still manages to creep in here, as May suggests to Daisy that there may be a way to separate the alien energy being inside of Sarge, potentially giving the team back Coulson, in a loose sense. Sarge himself seems pessimistic about this idea however, despite Sarge seeming to present himself as being much closer to the memory of Coulson at this point. It really does feel like May and Daisy have their leader back throughout this storyline regardless, but obviously, the question of Sarge’s loyalties can’t truly be cemented until Izel is destroyed.

On the note of Izel’s destruction, those duties primarily fall to Fitz, Simmons and Deke, particularly once Deke somehow comes up with a way to mass-produce the Izel-blocking sonic bands, which allow the S.H.I.E.L.D. agents to enter the temple, without fear of being possessed. This is incredibly convenient, though as you can imagine, there’s a pretty big catch. It turns out that Deke has secretly smuggled his old company’s employees into the S.H.I.E.L.D. base, whereupon they’ve begun expediting Deke’s technological developments. Fitz and Simmons bear witness to this, including Deke full-blown stealing and profiting from S.H.I.E.L.D. tech and history, which naturally re-ignites the bitter disagreements that Deke had with the former incarnation of Fitz last season, much to Simmons’ chagrin. This turn is pretty amusing though, even if Deke sneaking his entire tech team into S.H.I.E.L.D. without somehow being noticed feels a little too convenient. I get that S.H.I.E.L.D. is distracted by Izel right now, but is the base security really so lacking that Deke could sneak his entire workforce in there, completely undetected?

Regardless, Deke’s secret employee force does lead to another particularly great turn for his character, once he finally expresses resentment of the fact that, despite all of his accomplishments, everyone still treats him like a loser. This prompts Deke to take an untested teleportation device that he improvised from a jump drive, and warp into Izel’s temple, which handily allows him to outfit Yo-Yo, Mack and Flint with the Izel-repelling sonic bands, allowing them to get away, even if Deke has to take the scenic route. Deke dodging Shrike zombies, while hilariously telling Simmons that it would make a creative idea for a video game (ugh…), makes for some decent entertainment, plus Deke is also effectively utilized to provide footage of Izel utilizing her song to open a portal to her world, via the power of the re-formed monoliths. Deke does manage to make it back to the Quinjet soon afterward too, where he’s simply told to wait for extraction, but he’ll no doubt find another chance to be useful during this season finale event’s second half.

Mack, Yo-Yo and Flint manage to make their way back to Daisy and Piper as well, though Piper leaves the field to take Flint away, after Izel possesses Yo-Yo, and forces her to break Flint’s leg. This at least still leaves two Inhumans on the director’s side though, as Shrike zombies break into the Zephyr, forcing Daisy, Mack and Yo-Yo to barricade themselves into in an enclosed part of the their escape vehicle. This is the point where Daisy brings up to Mack that Sarge has joined May in her quest to stop Izel, which Mack is vehemently against, citing that the Devil will wear the face of someone familiar to elicit someone’s trust. While Mack turning doubt over Sarge into a religious tirade is rather melodramatic and over-the-top, he does nonetheless prove to be correct to suspect Sarge as well, since Sarge eventually finds himself unable to kill Izel, even when directly standing over her. After May and Izel both try to appeal to the separate sides of Sarge’s persona, Sarge eventually chooses Izel, stabbing May with his Shrike-killing sword, and kicking her into the portal! That’s certainly a hell of a twist for the lead-in to Agents of S.H.I.E.L.D.’s second season finale episode, even though it’s pretty doubtful that May was successfully killed, since she is a main character on the show. 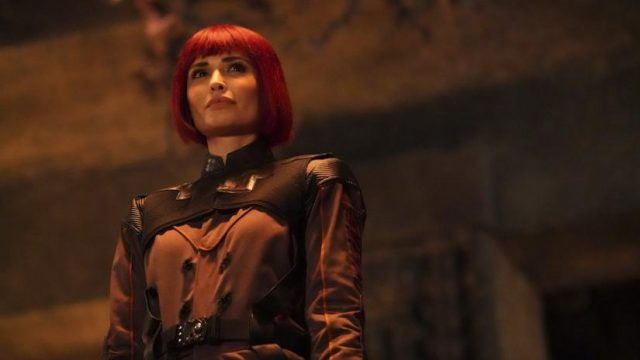 “The Sign” keeps the excitement cranked to an exceptional high throughout its runtime, providing a very thrilling and enjoyable kick-off to the two-part sixth season finale for Agents of S.H.I.E.L.D. Sarge ultimately choosing Izel over the memories of Coulson is an undeniably shocking and heartbreaking turn, considering how much he appeared to be coming into the former identity of Coulson very recently, especially since this creates another massive obstacle for the rest of the S.H.I.E.L.D. crew. Sarge seemingly disposing of the only weapon capable of killing Izel also leaves the planet wide open to a massive Shrike invasion, so even if Daisy, Yo-Yo and Mack manage to survive the coming wave of Shrike zombies, they’re likely still too late to save the planet at large. Things look pretty bad, but this does at least set the stage for what’s hopefully an equally exciting second portion for this season finale. Fortunately, this means that we won’t ultimately have to wait long to see what terrible fate has befallen May, and how the S.H.I.E.L.D. crew could possibly find any way of stopping Izel, now that she officially seems to be indestructible.