Grief is a powerful thing, and can be very dangerous, especially if you let it consume you and take over your life. As anyone who’s gone through it will attest, it’s one of the most difficult things a person can or could ever deal with. Those who are able to avoid it for the majority of their lives are the lucky ones, although they may well be in the minority.

Such is the overarching topic of conversation within Andrew Cull’s debut novel, Remains. A tragic story of loss and despair, it gives nightmarish literary life to the darkness that is immense grief. The result is a tale of horror that is as black as it is despairing.

Remains tells the story of Lucy Campbell — a mother who lost her son far too early and has suffered greatly since. Feeling like her life ended when her beloved son’s did, she’s been in and out of a mental institution after being so grief stricken that she couldn’t manage. Even after her stay, she remains unable to really cope with the great loss that she unjustly suffered. 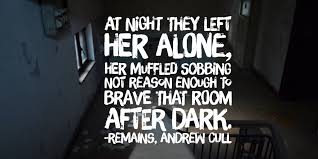 Alex Campbell came from a loving home, and was everything to his parents, Matt and Lucy. One night Alex didn’t come home when he was supposed to, and his mother simply thought that he’d lost track of time. She decided to give him some leniency, but unfortunately her positive thoughts were not reality. For some reason, a disturbed man kidnapped the young boy, took him to a random house (which just so happened to be empty because its occupants had gone on vacation the day prior), and murdered him in one of the upstairs bedrooms. The motive was never really discovered, and the parents were kept in the dark by the police, out of respect for their sanity. That is, until the details of what happened leaked out.

That house, at 1428 Montgomery, is as much of a character as (almost) any human being within Remains‘ narrative. It calls to Lucy, haunts her dreams, and acts as white noise that never leaves her mind and ears. It’s also a place where she continues to find herself, almost as if she’s drawn to it on autopilot, and is a major part of this horrific tale of grief and despair.

This story, you see, is inspired by a case of death, seances and possession that played out in San Francisco, California, back in the 70s. The author makes mention of it in the foreword, and then goes on to set this book in the same, normally sunny city. However, cold is a theme throughout the 203 pages that tell this story, and it’s used effectively to describe and foreshadow events, feelings and the characters’ sanity. The house at 1428 Montgomery is always described as being cold, and the same is true of the areas around Lucy, at her apartment and the room she stayed in at the mental health hospital. In fact, things begin with a description of that tiny location, where it’s said that a corner of the room is so black and transfixing that nurses avoid entering after dark.

All around the house, and the city it inhabits, a cold and potentially dangerous winter threatens snow, sleet and freezing rain. This weather system provides a gloomy theme for a book that uses it well and benefits from it. After all, grief is a gloom filled state of mind, as many of us know. The odd thing about this, though, is that we’re talking about San Francisco, California, which sits within one of the hottest parts of North America. What’s described in this book is a typical winter in Canada, or the Northern United States where the weather can sometimes be worse than it is in Canada. Not California, where the sun is strong, rain is common and snow isn’t a regular thing. I don’t know if this was a conscious decision because of the themes of this story, or if it was an oversight.

Cold truly does play a significant role here, so it’s hard to say for sure. The odd weather just kind of took me out of the story a bit.

While being called to and consumed by the house where her son died for unknown reasons, Lucy continues to grieve in a very strong, and somewhat disturbed way. She starts to believe that, if she can just get inside of 1428 Montgomery, she’ll be able to contact and talk to Alex. Perhaps also find out where he is, and whether or not he’s okay. Delusional? Maybe. Grief can make people do strange things, though.

As someone who’s dealt with, and continues to work through immense grief, I appreciated how Remains tackled the subject. Although it takes things to extremes, it did a good job of capturing what grief feels like, and creating a story around that. By practically turning it into a character itself, this book succeeds in presenting its message.

This was a book that started incredibly well, and gave me a bit of a chill during its first thirty or so pages, before I had to put it down for the night to try to get some sleep. It continued to impress me with its descriptions of darkness, grief, love and loneliness, and had some really great lines, as I read through the rest of its 203 pages. The winter storm confused me a little, and the ending wasn’t as great as I’d hoped it would be, but overall this ended up being quite a good book. It’s something I’m glad I heard about, requested and read, and something that I can easily recommend to fans of horror.

This review is based on a copy of the book that we were provided with by its publisher.