The DC Universe streaming platform may remain unavailable outside of the U.S. at this point, but fortunately, those of us up in the Great White North are still managing to get the platform’s standout original series content, even if it airs late in Canada. The latest live-action series reboot of Swamp Thing is thus the most recent offering to come from DC Universe, one cut down frustratingly quickly, after Warner Bros. cancelled the series following just one American episode release, for reasons that I’m sure make sense to someone in some boardroom somewhere, and literally no one else. Even several of the actors spoke out in anger about the abrupt cancellation of the show (particularly Virginia Madsen), and I can see why. Like Doom Patrol before it, Swamp Thing appears to be another slam dunk for the DC Universe app, with a first episode that once again delivers one of the best and most compelling DC television offerings in recent memory!

Canadians once again have to wait longer to check out Swamp Thing, which is only now airing out its paltry ten-episode run during Tuesday nights on Canada’s Showcase channel (excluding this first episode, which aired as part of a two-night event on the previous Monday), but the wait is well worth it, even if it will naturally sting that Warner Bros. inexplicably axed the show so quickly. Swamp Thing is an engrossing blend of R-rated horror, small town mystery and just a hint of otherworldly romance. It’s easily the best live-action offering that DC has managed to attempt with one of its strangest occult-themed characters, even though Swamp Thing seems to be cursed in this medium, having his longest TV run in the early 90’s, at three seasons. Similarly, Swamp Thing was supposed to be featured for an extended arc on NBC’s Constantine series from a few years ago, which was also quickly cancelled, and later had its canon retroactively folded into The CW’s shared ‘Arrowverse’ TV shows, where Swamp Thing was given a brief mention on Legends of Tomorrow, but never truly featured in the ‘flesh’.

It’s really disappointing that Swamp Thing keeps running into these tough breaks on TV, because this latest Swamp Thing series fills yet another hole in the increasingly crowded superhero television market. The series starts off with a very distinct hook, as CDC researcher, Abby Arcane, who is interestingly played here by Gotham’s Crystal Reed, is called back to her hometown of Marais, Louisiana, after a mysterious ‘green flu’ begins to pop up with some of the citizens. The flu appears to be connected to Marais’s nearby swamp land, where strange experiments appear to be being undertaken. Determined to get to the bottom of these experiments alongside Abby is maverick scientist, Alec Holland, who was hired by Marais’s most prominent business magnate, Avery Sunderland, only to later be dismissed, only to be re-hired again? Yes, Avery Sunderland and his wife, Maria, played by the aforementioned Virginia Madsen, are suspicious as hell, but it turns out that they also have bad blood with Abby, who is apparently responsible for their daughter’s death some years past.

If there’s any criticism to level at this pilot episode for Swamp Thing, it’s the fact that it’s almost too much of a good thing. The pilot does have to jump around quite a lot in order to establish the many moving parts of the show and its setting, but it’s constantly clear that a ton of ambition and effort went into Swamp Thing, which makes its abrupt cancellation hurt all the more. Even the special effects are pretty good, surprisingly so, considering that DC Universe’s original live-action series content is often forced to work with a pretty paltry live-action budget, as was sometimes evident during the debut seasons of Titans and Doom Patrol. Swamp Thing however presents some legitimately awesome showcases of raw and visceral body horror, most notably during an attempted autopsy effort shared between Abby and Alec, as well as during the climax, when Alec ventures into the swamp by himself, and inevitably runs into trouble, after being targeted for death by a mysterious assailant.

The atmosphere of Swamp Thing is also incredibly potent, with green-tinted cinematography and quaint, but uneasy small town charm being prevalent throughout this entire first episode. The mystery behind Marais and the swamp immediately hooks the viewer, with Abby effectively serving as the eyes of the audience, even if it’s Alec that’s pushing most of the story forward at this point. On that note, there are many characters introduced in this first episode as well, several of which will be recognizable from DC Comics lore. Alongside Abby, Alec and Avery, you’ll also catch glimpses of Matt Cable, now portrayed here as a well-meaning local cop in Marais, Liz Tremayne, an old reporter friend of Abby’s that’s based in Marais, and Madame Xanadu, a very prominent oracle in the DC Universe, who doesn’t even get a speaking part in this pilot, but is bound to come into play later. The cast all fit very well into the show’s ensemble to boot, even if their introductions sometimes feel a little hasty, due to the busy plotting.

Ultimately though, it’s Abby and Alec that end up stealing most of the episode, which makes sense, since Abby in particular is in a lead character role. Swamp Thing appears to be foreshadowing a budding romance between these characters, since they really do have great chemistry, and find mutual comfort in each other’s presence while poking around the otherwise unpleasant mystery that’s currently plaguing Marais. That’s why it’s all the more shocking and heartbreaking when Alec ends up seemingly being killed at the end of the episode (unless you’ve already read DC’s Swamp Thing comics, in which case, you probably saw this turn coming), leaving Abby scrambling to escape the mysterious swamp mutagen that’s killing swamp travelers around Marais, but appears to be called off by a humanoid figure that rises from near the site of Alec’s body. Yes, you ultimately don’t see the titular Swamp Thing of this particular TV universe until the closing seconds of the episode, but the wait is certainly worth it, with Swamp Thing being another impressive effect, for a show that was frustratingly killed before it could even begin its Canadian run this Fall. 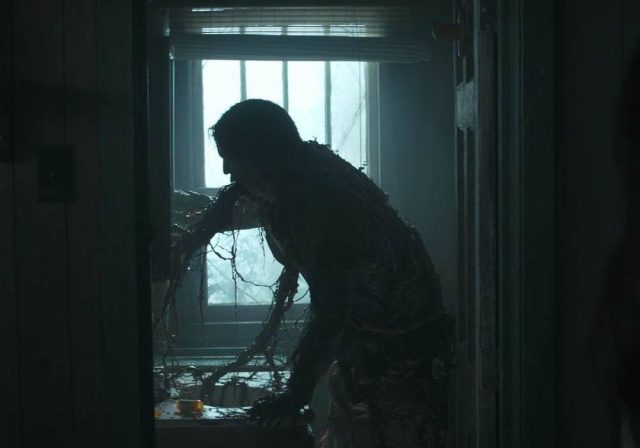 Still, this first episode of Swamp Thing is an unnerving, yet thoroughly enjoyable delight, delivering a sinister and terrifying mystery with a hard R-rated tone, which presents no shortage of exciting story developments, even as Warner Bros.’ cruelty only leaves us with ten episodes through which to enjoy them. There’s a lot of narrative ground to cover, and that can make this first episode feel a little imposing for newcomers who are not already familiar with Swamp Thing’s character from other DC media, but for DC fans, horror fans and/or anyone just looking for another cool, adult-oriented genre show to enjoy, Swamp Thing is well worth checking out. The odds of Warner Bros. reversing their asinine decision to terminate the show so soon after launching it feel disappointingly slim, but good television is good television, and if nothing else, Swamp Thing will continue to provide a great case for making the DC Universe app’s original programming available to the widest audience possible!