After an outstanding, albeit narratively dense pilot episode, it feels like Swamp Thing still isn’t done establishing several of its key personalities in its second episode, “Worlds Apart.” This isn’t just due to the title character finally taking shape however (literally), but also because Marais seems to be filled with so many noteworthy personalities that the series couldn’t even get to all of them in the pilot episode! This is on top of further establishment for characters that we actually did meet in the pilot as well, with the show’s horror element sacrificing a bit of momentum for most of the runtime, in favour of focusing more on character work, along with the fallout from Alec Holland’s apparent death.

Marais’s police force naturally proves unhelpful when it comes to investigating Alec’s untimely end, but their cold trail does at least give us a chance to meet Sheriff Lucilia Cable, Matt Cable’s mother, and one of the all-new key characters introduced in this episode. Like Maria Sunderland, Lucilia doesn’t appear to completely trust Abby, and is especially wary of her son’s personal connection to Abby, but the episode doesn’t end up doing much with this. Instead, it feels like Abby’s investigation, which primarily revolves around trying to reclaim information from the police seizure that may lead to what Alec was looking at and why he was killed, exists primarily to keep giving us a convenient tour of Marais, while also continuing to establish the personal connections that Abby left behind so many years ago.

Chief among these is Abby’s connection to the Sunderland family. It’s revealed here that Abby wasn’t just friends with the deceased Sunderland family daughter, Shawna, but was actually her adopted sister! At some point during Abby’s past, she was taken in by the Sunderland family, which likely explains why she’s so eager to trust, “World-class manipulator” Avery Sunderland, despite the warnings of Liz, whom Abby is currently staying with. A brief, but tense exchange between Abby and Avery ends up going nowhere, but we do get an interesting tease with Maria at least, who consults with Madame Xanadu about her continued grief over Shawna. Xanadu however sees a violent vision of an imbalance between the light and the darkness, suggesting that an evil presence has found its way to Marais, and if Maria knows what’s good for her, she’ll leave things alone.

Maria of course doesn’t do that, possibly foreshadowing antagonistic Swamp Thing entity, The Rot (or ‘The Black’, a death-themed antithesis to ‘The Green’, the force that gives Swamp Thing form), to come to the show as the true threat to Marais, despite Avery’s accelerant still playing a key part in the town’s current woes. Yes, obviously it was Avery’s accelerant, which is something that any viewer could probably figure out in advance of this revelation, even if they’ve never touched a Swamp Thing comic in their life. It turns out however that the man who actually designed the accelerant itself is Jason Woodrue, better known in DC Comics lore as the villainous Floronic Man! For now though, Jason and his wife, Caroline are meeting with Avery to discuss the ‘green flu’ that inadvertently resulted from the accelerant, and how Jason and Caroline had better clean up the mess before it takes them all down in lawsuits and social ruin. It’s pretty predictable stuff, but at least Kevin Durand’s Jason Woodrue makes for a memorable introduction, with the Swamp Thing universe’s Woodrue being an over-the-top rude and awkward man that has no social filter, as well as a deep-rooted love of plants, pun not intended. 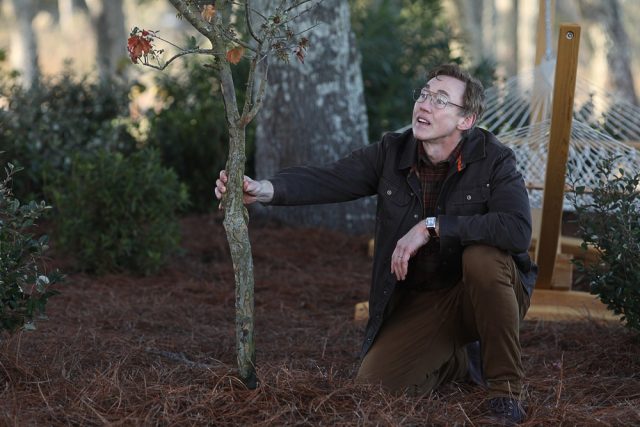 Admittedly, the material with the Sunderland’s didn’t quite engage as much in this episode, simply because you could spot these ‘twists’ with Avery and Maria coming a mile away. Avery somehow being behind the illegal experiments in the swamp, and Maria eventually quite literally getting into bed with dark forces to reconnect with her dead daughter, are not shocking in the slightest. Fortunately, there was still plenty of material with Abby that didn’t involve the Sunderland’s, most notably when Abby meets yet another key character for the show while investigating Alec’s death, that being Daniel Cassidy, who was renting a room out to Alec above his video store at the time of Alec’s demise. Cassidy is a rather distinct, but lesser-known superhero called Blue Devil in DC Comics lore, and in the case of the Swamp Thing universe, his ‘Blue Devil’ moniker comes from a character that he played in a semi-famous movie, which Marais is largely associated with, somewhat mirroring the character’s comic book backstory as a stunt man. It’s a neat foreshadowing for an arc that this character was obviously meant to have later in the show’s proposed run, before Warner Bros. cruelly cut Swamp Thing so short.

While the horror element of this episode may take a backseat until the climax, said climax is plenty exciting. It turns out that Susie Coyle, after having a nightmarish vision of the humanoid figure in the swamp, has left the hospital, stowing away on Marais’s game warden’s boat in the process. When the game warden inadvertently runs afoul of some Avery’s thugs as well, who appear to be getting rid of evidence, the warden is hit with a giant fishbook through the face by one of the thugs, Munson. By the time Abby and Matt, whom Abby enlists to help her find Susie, makes it to the warden, he dies from his injuries, leading to Abby and Matt separately going to look for Susie. Naturally, Susie has already found her way to the swamp creature however, who is attacked by Munson, only to heal his stab wounds. The creature then commands the swamp itself to grab Munson and rip him apart, before Abby forcibly calls Susie away from the creature. It’s an exciting sequence with an effectively violent and memorable finish, particularly when we get to see Swamp Thing himself properly in action for the first time!

The episode soon after winds down with Susie revealing to Abby that the swamp creature told her that his name is, “Alec”, no doubt twisting Abby’s reality all over again, when she realizes that the man that she was growing rather close with might not be so dead after all. “Worlds Apart” lost a small amount of the incredible momentum from Swamp Thing’s pilot episode, but it still kept the majority of it, diving into an effective focus on character development, world-building, and a memorable first battle for Swamp Thing himself. Beyond the Sunderland’s following a few too many antagonist cliches, the character work really is great here too. Even Abby’s budding romance with Alec is explored well, and is paced effectively with Susie seemingly revealing that Alec has survived, albeit in a different form, at the end of the episode. The mysteries of Marais remain compelling as ever, and this keeps Swamp Thing going strong in its second episode, setting the stage for inspired new threats, along with a Beauty and the Beast-style love connection that’s bound to turn Abby’s world upside-down!