After all of the action and excitement during the previous episode, it feels appropriate that Fear the Walking Dead would subsequently slow down a bit, in favour of delivering another slower-paced, character-focused offering. “Today and Tomorrow” also continues spotlighting the surprise new antagonists that have made their way into Season Five’s back half, after Logan was unexpectedly killed, and Virginia and her Pioneers now serve as the main threat to Morgan’s crew at this point. Outside of this episode’s core Morgan/Al storyline, Daniel and Grace also make a supply run, one that ends in seemingly grim consequences for Grace.

Despite briefly breaking from its regular formula during the previous episode, Fear the Walking Dead appears to bring that old formula back in, “Today and Tomorrow”, namely when Morgan and Al stumble upon yet another new survivor named Tom. Tom is on the run from mysterious pursuers, and when Morgan and Al detect him trying to make off with some of their gas, they get a look at who is after Tom– Mysterious people that wear cowboy hats and ride on horseback. Yep, the Pioneers are back again, and this made for a sharp opportunity to show how far they’ve truly expanded, since their forces are even as far away as Morgan’s and Al’s current distant location! Fortunately, despite an errant gas cap that Al narrowly grabs before it’s spotted, Morgan, Al and Tom manage to avoid the watchful eye of the Pioneers, at least for now.

Tom subsequently tells Morgan and Al that the Pioneers are holed up in his former gated condo community, Paradise Ridge, which currently appears to be the group’s base of operations. After Tom recounts some familiar, “For the future” rhetoric as well, while indicating that his sister, Janis is missing, Al decides that she simply must break into the condo complex and look for clues. Morgan is initially puzzled as to why Al is so determined to get in and bail out Tom’s missing sister, but viewers of course will likely recall that Al is recognizing the rhetoric from her time with Isabelle, who may possibly be connected to the Pioneers! I have to say though, if Isabelle is indeed affiliated with Virginia’s uncompromising group, that’s certainly going to make things very complicated for Al!

Regardless, Morgan and Al use walker cleanup protocol to sneak into Paradise Ridge, whereupon they both split up, and look for intel related to who they’re dealing with. This provides a standout opportunity to get an extended look at the Pioneers’ operations, as Morgan and Al both discover evidence related to how the Pioneers live and function, and how they’ve seemingly created a sustainable economy and chain of supplies within the condo complex. They also however fail to find any clues related to Isabelle, nor any clues as to the whereabouts of Tom’s sister, instead finding that Janis’ apparent captor has been killed, and re-animated after being shut in a closet. Following Al nearly being killed by that walker, Morgan dives into the pool that they plunge into, and saves Al’s life, only for both of them to be captured by Virginia’s people immediately afterward.

Considering how uncompromisingly lethal that Virginia was when she killed Logan during the previous episode, it’s a little surprising that she also demonstrates an impeccable ability to be charismatic and civil here. Despite Morgan and Al also disagreeing with the Pioneers’ method of survival, and refusing to go along with it, Virginia nonetheless returns their supplies, and even repairs Morgan’s broken staff! It’s an odd show of good faith from a character that is seemingly supposed to be the true villain of Fear the Walking Dead’s fifth season, though this also does a solid job of making Virginia more than just a moustache-twirling baddie. Virginia doesn’t really come off as evil, and is instead a surprisingly effective reflection of Morgan’s own desire to let go of the past, despite Morgan and Al opting to leave, seemingly condemning Virginia’s crew clinging to an old way of life that goes against their own altruistic philosophies.

What the encounter with Virginia does at least accomplish for Morgan however is motivating him to finally let go of his own past, namely his dead wife and son, and finally own up to his budding feelings for Grace. This caps off a subplot with Grace and Daniel, wherein the two get some supplies, only for their truck to break down because the weight of their spoils ends up mucking up the truck’s transmission. After some records that Daniel tried to grab for Charlie are then destroyed during a subsequent walker attack, Daniel and Grace hole up in a nearby bar, where they talk about where they’ve been, and what their futures may look like. It’s a nice little storyline, especially when the two end up singing a song together with a nearby guitar, but it didn’t totally feel like this Grace/Daniel material meshed well with the rest of the episode. Not only that, but Grace’s condition predictably worsening right as Morgan is ready to profess his love for her feels way too trite and predictable. Maybe it’s a false alarm, but it will be a real annoyance if Morgan loses Grace this quickly, which will probably lead to him regressing as a character yet again next season. 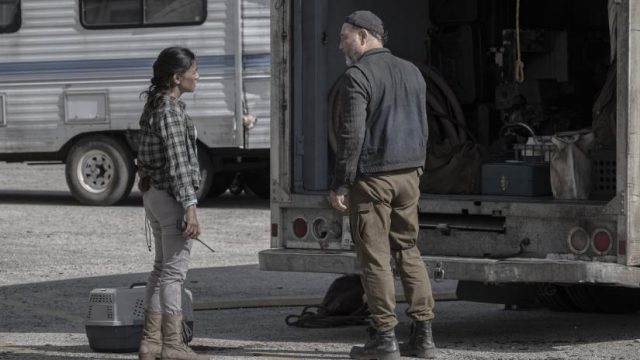 “Today and Tomorrow” does a good job of exploring more of the Pioneers’ operation, while also providing the intriguing hint that they’re not actually part of the mysterious group that Isabelle was seemingly affiliated with earlier in the season. Morgan and Al walking out of Paradise Ridge completely unscathed, and even with a weapon restoration for Morgan, is also a nicely unexpected turn, continuing to build the Pioneers as challenging and morally complex foes that will continue to put Morgan’s principles to the test. I wish that Grace and Daniel had something more productive or meaningful to do in their own subplot, but even so, Fear the Walking Dead did a good job of slowing its pace down again, without becoming boring in the process. The coming battle against the Pioneers is starting to look like it’s going to be an issue for next season, not this one, but that’s no doubt a good thing, especially since Grace’s worsening condition is certainly going to be grabbing all of Morgan’s attention for the next little while.