After its highly ambitious, large-scale pilot episode, Pennyworth takes a bit of a break from its crown-targeting conspiracies, to instead focus in on the current everyday concerns of Alfred. “The Landlord’s Daughter” thus details Alfred’s first real security job, after turning down an initially attractive offer from his new pal, Thomas Wayne. This ends up bringing Alfred into the orbit of a rather notorious crime lord based out of Whitechapel, albeit one that could give his struggling security business the launch that it deserves. At the same time, Bet awaits her inevitable execution at the Tower of London, in turn further fleshing out one of the standout antagonists from Pennyworth’s pilot episode.

As much as this episode provides an eventful and exciting first proper job for Alfred, it’s the Bet subplot that ends up presenting a lot of this sophomore episode’s best and most chilling material. Bet was already one of the best villains, if not the best villain that Pennyworth had delivered in its initial ensemble of baddies, and as a ruthless, conniving sociopath, Bet continued to develop into a standout foe in this episode. This is explored through Bet interacting with the guard, whom she manipulates into a friendship, and later a sexual relationship, only to keep the used condoms and use them to blackmail the guard. This forces the guard to deliver two letters of Bet’s, one of which goes to Bet’s sister, Peggy, a character who seems to have her own twisted hobbies, and the other of which goes to Esme, whom Bet appears to write a letter of respect to, but one that also seems to echo that of an intimidation effort. 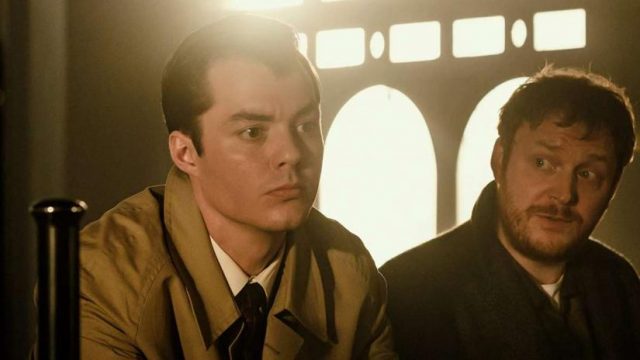 Speaking of Esme, her relationship with Alfred further develops in this episode as well, alongside her acting career. Alfred initially attends her play, which is beginning to get Esme more acclaim as an actress, though eventually, Alfred’s job takes him away from Esme, prompting Esme to worry more about Alfred’s safety. This is a potentially interesting idea, though at this point, Pennyworth seems to be struggling with the same issue from Barbara Kean’s early episodes on Gotham, namely that Esme is currently coming off as too much of a shrew, and seems to simply exist to provide emotional fallout to any effort that Alfred makes to stake his claim in the world. Likewise, Alfred proposing to Esme at the end of the episode rings hollow, since there just hasn’t been enough effective relationship development between these two yet, not to mention that the canon of Gotham, along with Batman/DC media in general, seems to indicate that Alfred is a confirmed bachelor in the end, so it seems obvious that Alfred’s relationship with Esme is eventually doomed to fail.

Fortunately, Alfred’s first actual job in the security business proves to be much more interesting to watch. This comes along once a young man begins accosting one of the servers at a pub in Whitechapel, whereupon the barkeep is tipped off by Dave Boy that Alfred is attempting to work in the security field. After Alfred reluctantly takes on the task of getting the young man to back off, it comes out that the man is Jason Ripper, the nephew of notorious Whitechapel crime boss, John Ripper. After Alfred inevitably starts a fight in the streets with Jason and his thugs, he later approaches John, and seems to reveal that John has a weak link in his organization. For a character that was so reluctant to take on a job with Thomas Wayne, Alfred sure is swinging for the fences with this one!

Nonetheless, the introduction to John Ripper, and how Alfred earns his respect, is consistently enjoyable and unpredictable. After Dave Boy and Bazza feign a torture effort to try and intimidate Jason into confessing his ties to his uncle, it’s then revealed that the entire torture effort was staged by Alfred, who wanted to indicate to John that his nephew is weak, and can’t be trusted with his criminal connections. After Jason is then permanently exiled from London, John asks why he should bother to keep Alfred alive, in a pretty inspired moment that sees John working as a coroner and crematorium specialist, who was performing an autopsy on someone who disrespected him, right when Alfred happened to show up. Alfred even gets himself dumped into a trapdoor during this exchange, though he naturally talks John out of killing him in the end, allowing him to go home safely to Esme. It feels like a good chunk of this exchange was cut off, but in a way, it does feel more effective to leave the rest of it to the imagination, especially since we know that Alfred can be incredibly charismatic when he needs to be!

There’s also some addressing of the ongoing work against the Raven Society, namely when Harwood is tortured by the Prime Minister himself, who naturally wants to know the identity of the Raven Society’s leader. Harwood initially doesn’t talk, then tries to pass himself off as the leader, but inevitably, the Prime Minister doesn’t buy it, and thus sends Harwood off to sustain another form of torture somewhere else. These scenes with Harwood, along with the all-too-brief appearance by Thomas at the start of the episode, don’t end up meshing that well with the largely Alfred-heavy storyline in the end, which is a shame. Still, Bet’s expected escape from the executioner’s axe helps to make up for this. Apparently, 1960’s-era London still holds televised executions in the Pennyworth/Gotham universe, and the Pennyworth family, alongside Esme, tunes in to see Bet get hung and disemboweled alongside the other prisoners (ick!). It turns out that Peggy Sykes is a very influential person however, since she ends up swapping out Bet for some unknown woman, who is executed in Bet’s place. Bet and Peggy then drive off together, casually talking about getting lunch. It’s an effectively gruesome and psychotic escape for Bet, and one that sets up Peggy as a similarly compelling antagonist, or at the very least, someone who doesn’t want to allow her criminal sister to die.

“The Landlord’s Daughter” does a solid job of establishing the fledgling first effort of Alfred’s struggling security company, even if Alfred’s sudden glowing reputation, and hasty proposal to Esme, feel a bit too clean-cut and happy to truly last. That said, Alfred getting into bed with John Ripper, even just by piquing John’s interest in Alfred’s skills, made for a very engaging and fun core storyline. Like I said though, it was Bet that really stole the show in this episode, going to any uncomfortable, squeamish lengths in order to escape execution. Harwood isn’t really working as an antagonist quite yet, especially since he spent this entire episode in a torture chamber, but the Sykes sisters nicely appear to be compensating for this, providing the exceptional villainous presence that a show as cool as Pennyworth truly deserves. Bet once again being at large was bound to happen too, thankfully leaving us with more crazy shenanigans to look forward to with Pennyworth’s current best baddie!