After some pretty incredible momentum in its first two episodes, Swamp Thing settles into more of a familiar groove with its third episode, “He Speaks.” This is another character-focused episode that’s all about delving into character backstories, with somewhat less focus on the investigation into the Green Flu, even if a surprising new victim at the hospital ends up creating more problems for Abby. At the same time, Liz undertakes her own investigation into the Sunderland’s, which ends up poking at a deeper conspiracy than anyone in Marais could imagine.

Due to settling into a more familiar groove, Swamp Thing doesn’t present quite as many thrills or surprises in this episode, but its focus on character does generally work well, when it’s maintaining the show’s usual outstanding commitment to creative storytelling. Abby in particular ends up running into a surprising new dramatic obstacle here, namely once Harlan becomes infected with the Green Flu, making her hightail it back to Alec’s lab, in order to desperately find information on a cure. It’s here however that she ends up being attacked by the resurrected Munson, who has been re-formed by another force in the swamp via a horde of bugs, to become horrific DC entity, The Rot!

Making Munson the Swamp Thing universe’s take on The Rot is a solid idea, and while some of the character’s special effects are a little dodgier than most of what the show has delivered so far, the idea of Munson stalking the swamps and taking out more innocents as a creature of the night is pretty cool on paper. That’s why it sucks that virtually nothing is done with this. The only reason that Munson is reborn as The Rot is so he can attack Abby at Alec’s old lab, resulting in Swamp Thing inevitably appearing to protect Abby from harm. There’s a very awkward fight between the two, and Swamp Thing simply separates The Rot from Munson’s body, eliminating the threat in a disappointingly easy manner. That’s pretty lame, considering the awesome confrontation between Munson and Swamp Thing that the previous episode ended up delivering.

Regardless, Abby gets to interact with Swamp Thing one-on-one in this case, now that Susie is back at the hospital. This allows Abby to learn a bit more about the Green Flu, resulting in her saving everyone at the hospital when the cliched CDC dick gets sent in to mess up everyone’s treatment by misunderstanding the virus. The nice moment that Abby gets with Susie after this makes it worth it, but the way that Abby stabilizes the Green Flu with Alec’s help, against the protests of the CDC and hospital security, is disappointingly cliched. Likewise, Abby’s first introduction to Jason Woodrue, who is predictably insensitive about the demise of Eddie Coyle, is great, but not much is really done with it yet. Instead, the final result of Abby’s story arc is Swamp Thing getting a glimpse of her dancing with Matt Cable in the local bar. As much as the budding romance between Abby and Swamp Thing is appealing, it sucks that this episode is developing it with too much trite, predictable plotting in this case. Hopefully this relationship can develop more organically and creatively in the following episode. 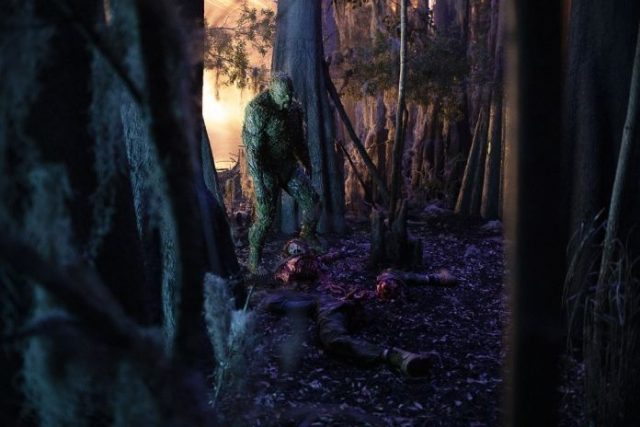 Regardless, Swamp Thing’s antagonists also got a lot of focus in this episode, most notably the Sunderland’s, whose corrupt banker ends up being harassed by Liz while she’s chasing a story. Liz and her partner separately discover that Alec appears to have been shot at before he died, and this narrowly gets Liz into trouble later, but the banker actually ends up playing into another story arc with Avery. It turns out, in another surprising, but effective twist, that Avery is not actually the main source of Sunderland finances, and is instead deriving his fortune from his wife, Maria. Maria continues to be tormented by visions of her dead daughter, while Avery undertakes some sort of illicit dealings with the banker in the background, and flirts with Lucilia Cable, whom he apparently has a romantic past with, in another great twist. The result of all of this has Maria deciding to cut Avery off from her finances however, and naturally, Avery doesn’t take this very well.

Avery was originally a bit of an ambiguous presence on this show, particularly given his surprisingly heartfelt family connection to Abby. In this episode however, Avery goes into full-blown villain territory, specifically when he attempts to intimidate the banker into continuing the illegal financing for the swamp study, even when the banker wants out. Once the banker mentions Avery’s affiliation with the Conclave however, an organization of criminals that should be recognizable to avid DC Comics fans who have read DC’s Swamp Thing comic books especially, Avery decides to kill the banker in his own bathtub, using a golf club. It turns out that the Conclave, whoever they may be in the case of the Swamp Thing universe, are very serious business! Liz even almost gets killed when she comes this close to discovering Avery’s banker’s recent murder to boot, but fortunately, she walks away before she ends up on the receiving end of that same golf club. Even then however, Liz discovering decisive proof that foul play was involved in Alec’s death is nonetheless bound to cause big problems for Avery in the near future.

The Sunderland family material is arguably the best part of, “He Speaks”, despite Abby having a very close call with The Rot, and getting some crucial Green Flu help from Swamp Thing in the process. Disappointingly though, The Rot ends up being pretty much wasted here, leaving Munson’s body with barely a fight. Avery Sunderland is nicely picking up the slack as one of Swamp Thing’s most compelling antagonists at this point though, alongside Jason Woodrue, whose wife has early-onset Alzheimer’s Disease, as we learn in this episode. Surprisingly, Abby ended up being overshadowed by several other characters here, but now that she’s had a more good-willed interaction with Swamp Thing, hopefully Abby’s continued desire to save Alec can once again bring their unusual relationship to the forefront in the following episode, in a more effective way.

Swamp Thing 1.3: "He Speaks" Review
Swamp Thing settles into a more familiar groove with, "He Speaks", falling back on some predictable plotting, despite more standout storytelling with the Sunderland's.
THE GOOD STUFF
THE NOT-SO-GOOD STUFF
2019-10-15
80%Overall Score
Reader Rating: (0 Votes)
0%