Following the shocking turn that came in the wake of Jesse’s failed mission to reach The Lost Apostle during Preacher’s previous episode, Tulip and Cassidy are left to deal with the tragic fallout. After coercing Cassidy into dropping him out of the plane with Genesis, Jesse has naturally died from falling thousands of feet, with the Saint of Killers now watching as his body is buried in the desert. Of course, ‘death’ for Jesse doesn’t really happen in the traditional sense in this case, since Jesse naturally lives on in the afterlife, where he’s presented with a very tempting offer. While this is going on, the Grail continues to frantically search for Humperdoo, who it turns out is hiding in a rather unlikely place!

There was a lot of slow burn storytelling in this Preacher episode, and in some respects, it did occasionally feel overstuffed. This is due to a lot of story elements one has to try and keep track of in this case, both with Jesse’s crew and with the Grail, and not all of these updates feel terribly important. Some of them are amusing, such as Herr Starr uselessly trying to reclaim his lost genitals from the dingo that God sicced on him for losing Humperdoo, along with Jesus being horrified at Hitler killing a Humperdoo clone after he once again fails to dance, but many of these little story asides could have been cut out, or placed in another episode, and wouldn’t have lost much in the process. Still, “Messiahs” nonetheless remains a pretty sharp episode overall, even if it has to spend a lot of time setting the stage for what’s to come with the impending conclusion of Preacher.

Regardless, after trying to pick up their bearings, with Cassidy healing his injured arm after feeding on someone’s chickens, and Tulip trashing a church in an effort to provoke God, Tulip finally reads Jesse’s letter, before leaving it to serve as kindling in the church that she trashes. Rather than be an emotional confession or last testament of some kind, the letter appears to point Tulip and Cassidy back to an old acquaintance. Said acquaintance is none other than Dany, the old crime boss from way back during Preacher’s first season, who, as it turns out, has a connection to the Grail, namely through a Jewish division!

As it happens, in what’s honestly a pretty inspired twist, Dany was the one that Jesse entrusted with the real Humperdoo. The letter points Tulip and Cassidy to her, with Dany saying that she wants her husband dead, as usual, and will take Tulip and Cassidy to Humperdoo if they oblige. After rather humourously popping the guy at a nice diner and simply walking out, Dany expresses astonishment in an even more funny turn, since Tulip has refused to kill Dany’s husband for years, only to now just do it out of sheer exasperation! Regardless, Tulip and Cassidy are soon after taken to Humperdoo, hiding in a synagogue (oh, the irony), and simply walk out with him. The rabbis try to stop them, but Humperdoo’s manifesting power compels them to let him go, even if he’s still babbling nonsense the whole time.

At the very least, Jesse should be happy that the real Humperdoo is back with his friends, even if they simply aim to take him before God and execute him, as a way of halting the apocalypse outright. Jesse has his own problems though, even beyond being dead. Once Jesse supposedly makes it to Heaven, he encounters Fiore, who walks him through the neverending battle between good and evil, and how it’s been affected by God abandoning Heaven. At the end of this long speech, Jesse is then taken to the golden throne of Heaven, which Fiore and several other angels implore him to take. This is certainly a very interesting offer, but clearly, something is amiss, and Jesse ends up deducing it fairly quickly.

Yes, it turns out that Jesse is not in Heaven at all, but is actually in Hell! Fiore is merely a projection from one of Hell’s prison cells, and the illusion is rattled once Jesse realizes that he’s gone to Hell, and not Heaven. Surprisingly though, the offer to take Heaven’s throne is apparently real, despite Jesse being in Hell, with the Hell projection being set up to legitimately offer Jesse ownership over Heaven, as confirmed once Fiore details how God came to abandon Heaven in the first place. Apparently, God simply left His duties in Heaven to travel around and take a vacation, before Jesse finally sees the true scope of His grand design; Replacing humanity with a new series of bird-like creatures, in, “Creation: Phase III.” This is a turn straight out of Preacher’s Vertigo/DC source comics, and pretty much explains why the apocalypse is about to happen– God is replacing humanity as the dominant species on Earth! 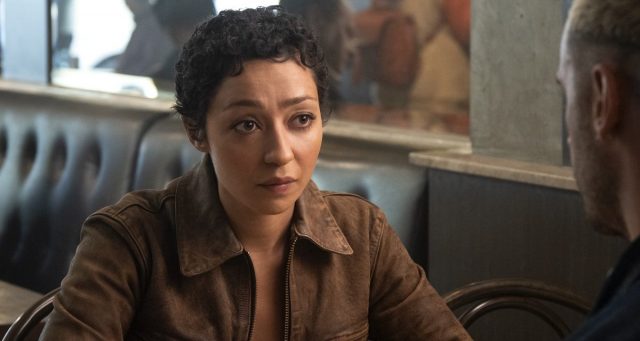 This would appear to establish the ultimate endgame of Preacher, as humanity itself is now being threatened with destruction by God, along with the combined forces of Heaven and Hell! Perhaps Jesse will ultimately have no choice but to take the throne of Heaven then, since there’s otherwise no way of stopping this turn, at least not by him. Now that Tulip and Cassidy have Humperdoo, perhaps they can strike a blow for humanity, in the most disrespectful way possible, but we’ll have to see if there’s any hope for the protagonists at this point. Featherstone could also be an asset in some form too, since she was apparently hiding under the Grail’s nose as that distinct bearded barista the whole time, even if her loyalty still seems to primarily be towards Herr Starr, as proven when she executes the Hoover replacement, who was apparently an undercover cop the whole time. “Messiahs” frantically lays the groundwork for Preacher’s final trio of episodes, and that makes a lot of it feel like establishment for later payoffs, but at least now we fully understand what’s at stake for this world. It’s just too bad that the wielder of Genesis is no longer among the living.