After so much hyping and teasing, we finally get a chance to see the famed oil fields on Fear the Walking Dead, just in time for Logan to finally discover them in turn! “Leave What You Don’t” proves to be quite a nail-biting episode for sure, as Logan corners whomever among Morgan’s people is working in the oil fields, which conveniently explains where survivors like Luciana, Annie, Max and Dylan ended up, after being mostly absent in Season Five’s back half so far. At the same time, Alicia and Strand also rush to help another survivor, ironically mirroring a previous failure of Logan’s from the time of Polar Bear’s demise.

The main draw of this episode is definitely the chance to learn the origins of Logan’s harsher side, thanks to a cold open that shows Logan back during the days where he worked with Polar Bear to leave boxes of supplies around the area. After being radioed by a woman in distress at Mile Marker 65, Logan tries to inform Polar Bear that someone needs help, only to get nothing but static. Left with no choice but to try to help the woman himself, Logan races to her location, only to run out of gas, which leads to him failing to run to her before she’s devoured by walkers. It’s a tragic look at a better Logan from the past, one that was clearly changed forever on the fateful day that Polar Bear met his end. 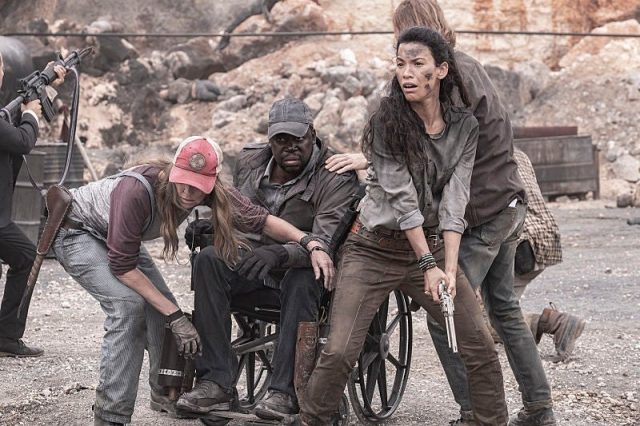 This is also well-timed with Logan charging into the oil fields with his cronies, cornering Luciana and her fellow workers, with Luciana apparently serving as the head of fuel production for Morgan’s convoy. Logan tries to coerce Luciana and co. into turning over all of the oil, and even amps up production to the point where the fires burn out of control, which in turn attracts walkers. Despite Dwight and Sarah coming to help, and John and June attempting to provide sniper support from a distance (even though this is clearly easier said than done in an oil field!), the dead start to overwhelm Logan’s hijacking operation, creating another admittedly distinct and cool obstacle for the bulk of this episode. It would have been nice if Logan didn’t have to break character from being a tactical mastermind to becoming a rabid nincompoop that’s obviously over-straining the oil production, but at least this does lead to plenty of excitement, so it could be worse.

It was also cool to see Sarah having to face up to her former actions, which led to the death of Polar Bear after she stole his rig. This reveals that Sarah also had an inadvertent hand in creating Logan’s villainous side to boot, which makes it fitting that Sarah is now one of the main forces in the thick of the fight at the oil fields. Once Dwight and Wendell declare that they have to leave however, after Logan fortunately sends Annie, Max and Dylan away hours beforehand, Sarah decides to stay behind and pull Logan out of the literal fire. This would initially seem to be a sacrifice play by Sarah, who is ready to lay down her life to atone for what she did to Polar Bear, and the episode does do a pretty great job of keeping the suspense strong too! 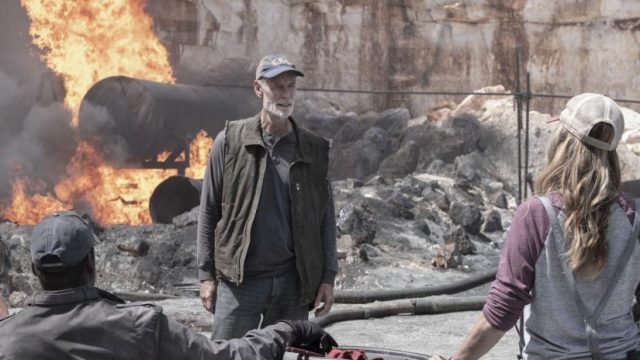 Even better is that the subplot with Alicia and Strand is timed nicely with the ticking clock at the oil fields. In the mother of all coincidences, another woman ends up needing help at Mile Marker 65, in the exact same location where Logan failed to save the other survivor a while back. This feels a little dramatically contrived for sure, but it does at least provide a good complement to Sarah and Logan having to hole up at the oil fields, wherein Logan is given a chance to talk to the woman in need, after Alicia’s and Strand’s vehicle runs out of gas, again, in the mother of all coincidences. Logan advises the woman to commit suicide, and she’s seemingly ready to, but before Alicia and Strand can arrive, and before the walkers can get her, more shots are suddenly heard on the radio! It turns out that Wes bailed the woman out, having overheard the conversation on his own walkie, which allows Alicia and Strand to meet up with both of them soon afterward, while also inspiring renewed hope in Logan.

Sarah and Logan surviving, and the oil fields somehow being undamaged by the raging fire and walker onslaught is pretty unlikely, but at least Morgan’s crew finally appears to be free of the threat of Logan. Logan is clearly ready to turn over a new leaf, and thus begins a new era of mutual survival efforts between the two groups! Nah, just kidding. In another surprise twist, Logan and his people all get shot and killed halfway through Logan’s inspiring speech! The shooters happen to be part of a new group of survivors called the Pioneers, who are attempting to settle the land like the real-world American pioneers of old. After the predictable villainous offer to join with them, which Morgan’s people refuse, the Pioneers’ leader, Virginia, declares that she’s taking the oil fields anyway, and killing Morgan’s people to do it! In order to defuse the situation however, Luciana vows to stay and help Virginia make use of the oil, on the condition that everyone else be allowed to leave. This is another pretty great twist, especially since we’ve barely seen Luciana for much of Season Five’s back half. Giving Luciana a surprising new role with the season’s unexpected new villains should make for a strong way to rectify that, or at least I hope so. 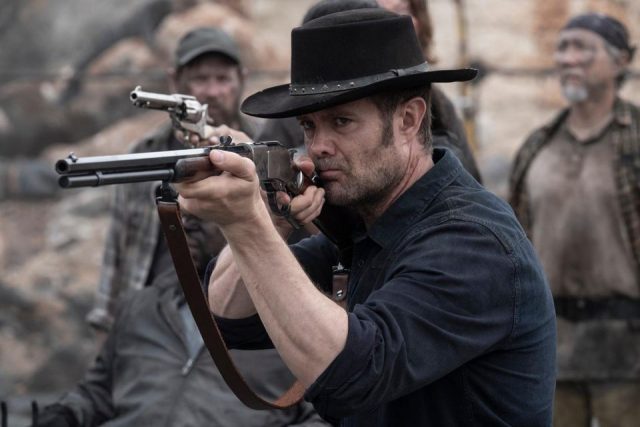 Logan surviving his own mess at the oil fields, only to get ironically and tragically killed by his ‘business partners’ soon afterward, was just one of many strong twists in, “Leave What You Don’t”, which is probably the most exciting episode that Fear the Walking Dead has delivered all season at this point. The narrative is still stretching to the realms of unlikeliness, if not outright ridiculousness, in order to make some of the show’s story ideas work, but at least Fear the Walking Dead is slowly starting to become more entertaining to watch, as Season Five approaches its endgame. Since AMC has already renewed Fear the Walking Dead for Season Six, I hope that Virgina’s Pioneers stick around as villains for longer than three episodes, especially since they feel like they’d be right at home in the more comic book-inspired style of AMC’s main The Walking Dead series. We’ll have to see what Morgan and Al say about their oil takeover too, once they learn about the terrible fate that’s befallen their former biggest problem.