Swamp Thing hit an uncharacteristic speed bump in coming up to its halfway point, seemingly presenting an episode filled with plot elements that were meant to be fleshed out in later episodes and seasons, all of which seemingly won’t happen at this point. “Drive All Night” once again slows the story down, focusing on the memories and grief that remain rooted in the swamps of Marais, namely in finally tackling the summoned ghost of Shawna Sunderland proper, which ends up presenting a harrowing obstacle for Abby, Susie and Maria alike. While this is going on, Lucilia begrudgingly follows Liz’s recent lead on Alec’s death, while Avery continues to struggle with maintaining his hold of fear over Liz in turn.

Several story elements show great promise, but since we already know that Swamp Thing’s run has been forcibly cut short by Warner Bros., it seems evident that most of these teases won’t end up going anywhere in the end. This is really disappointing, because, “Drive All Night” brings in an especially heavy dose of characters and lore from Swamp Thing’s DC Comics storylines, which were clearly meant to tease future story developments that were formerly planned for the series. This is most evident in a subplot with Swamp Thing himself, who encounters the Phantom Stranger in this episode, an occult-battling DC anti-hero whose true identity is never fully confirmed, and who takes the guise of a kindly fisherman in the case of this TV universe (I guess that’s not who Abby was hallucinating in the previous episode after all). The Phantom Stranger tells Swamp Thing about The Green, the nature-powered force that maintains all life, as well as the memories of the dead, through the swamp. This is a key element from Swamp Thing’s DC Comics origins, but in the case of this series, it simply serves as an excuse for Swamp Thing to bail Abby out later during the climax.

On the bright side, Madame Xanadu finally gets to more directly affect events on the show, after Abby gets a cryptic phone call from Susie, calling her to the Sunderland house. Maria seemingly goes along with this, at least at first, but when Abby goes to meet Susie, she instead sees frightening visions and hears frightening words, suggesting that Susie has been possessed by the ghost of the late Shawna Sunderland. This is an interesting idea, and one that finally allows both Abby and Maria to more directly confront their shared grief over Shawna’s loss. Inexplicably though, the storyline feels tedious in its execution, primarily because Abby doesn’t believe that Shawna has come back as a ghost, despite seeing visions to that effect, and despite Abby already knowing that the swamp can bring back dead people’s spirits, on account of the fact that it already did this with Alec! If Alec’s memories can manifest as a swamp creature, why is it so hard for Abby to believe that the clearly-haunted swamps of Marais would conjure up the memories of her dead childhood friend?!

Whatever the case, Abby ends up encountering Madame Xanadu after Maria chases her out of the house. Shortly afterward, Xanadu rides with Abby to the bridge where Shawna seemingly died, at which point Xanadu confesses to giving in to the desire to call back Shawna’s spirit, since the swamp seemed to be doing that anyway. It’s a bit of a weak explanation for why this whole hullabaloo with Shawna has been going on, especially since Swamp Thing later uses The Green to show a flashback of Abby clearly not killing Shawna, who was instead dragged away and presumably drowned by some other unknown force. Shawna’s spirit does leave Susie right when Abby and Xanadu arrive at the bridge though, allowing Susie to alert Abby that Maria is about to be drowned by Shawna’s spirit. Abby’s efforts to save Maria also end with Abby being nearly drowned, go figure, but fortunately, Swamp Thing intervenes, and once again saves both of them. Well, I guess if nothing else, Swamp Thing now being able to properly understand and utilize The Green should help this show move its narrative forward a little more. 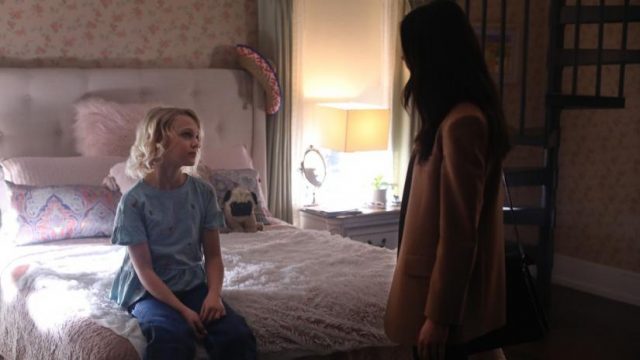 Avery Sunderland also occupied a heavy chunk of the episode, beginning with sneaking off to go have sex with Lucilia, which is where he learns that Liz has seemingly found evidence that Alec was killed in the swamp. Since Avery was behind that foul play, Avery decides that the best course of action is to go and intimidate both Delroy and Liz, which seemingly fails in Liz’s case, forcing Avery to send goons to later try and rough up Liz in the bar’s parking lot. Daniel ends up intervening though, and is critically wounded in the process, which seemingly leaves him comatose as well. As cool as it was to see Daniel literally burned by otherworldly flames as he attempts and fails to leave Marais, due to the unspecified curse that Madame Xanadu previously referenced, it seems like the show itself has given up on doing much with Daniel’s character at this point, since he’s now likely going to be confined to a hospital bed. Maybe there’s another twist in store with Daniel, but for now, I’m not holding out much hope that he’s ultimately going to fit with this show’s ensemble, before its truncated run is over.

Lucilia also gets an interesting scene amid all of this storytelling, wherein she shoots and kills a suspect after he threatens to seemingly expose Matt, shortly after revealing that Matt was identified as being out on one of Avery’s boats on the night that Alec was killed. For now however, nothing is really done with this, despite the implication that Lucilia may now have to suspect her son, assuming he’s actually on the level at all. “Drive All Night” had some good moments here and there, but it nonetheless felt like a disappointingly dry and underwhelming episode of Swamp Thing, especially considering how good the rest of the show has been so far. Like I said though, a lot of this is probably down to the fact that this episode was meant to set up future story turns, like the Phantom Stranger, Daniel’s eventual transformation into the anti-hero, Blue Devil, and The Green playing a key role in the spiritual disturbances from Marais’s swamps, only to likely be denied payoffs for all of these plot teases. I suppose we can lay this disappointment primarily at the feet of Warner Bros. then, but even so, a weak episode is a weak episode, so hopefully Swamp Thing goes back to exclusively sticking to the immediate conflicts at hand in its next offering.

Swamp Thing 1.5: "Drive All Night" Review
Swamp Thing stumbles with a slower-paced, less satisfying episode in, "Drive All Night", which props itself up on story teases that will likely never get a payoff.
THE GOOD STUFF
THE NOT-SO-GOOD STUFF
2019-10-17
73%Overall Score
Reader Rating: (0 Votes)
0%