After hitting a bit of a speed bump in its fifth episode, Swamp Thing disappointingly continued to languish in less effective story arcs in its sixth episode, once again focusing heavily on plot elements that were clearly planned to be fleshed out over a longer run of the show. “The Price You Pay” at least tries to present another big twist from within the Cable family though, while also taking another huge step in the evolution of Daniel Cassidy into Blue Devil, and sometimes this can work. Seeing an increasingly aggressive Swamp Thing become directly targeted by the agendas of Avery and Woodrue also has some good moments. Overall though, Swamp Thing is still being dragged down by its early demise at the hands of Warner Bros., which is making it difficult to care about the series playing the long game for a future run that it almost certainly won’t get.

Regardless, Woodrue takes Avery up on his suggestion to hire some hunters in order to capture Swamp Thing, so that he can get more samples through which to study his formula. This presents a pretty exciting opener for the episode, as Swamp Thing must fight to avoid capture, while also trying to get the hunters to flee. Naturally, this involves considerably injuring them, though let’s face it, these two got off pretty easy in contrast to Munson! Nonetheless, Abby and Liz are horrified at the injuries sustained by a reported, “Swamp monster”, despite both of them trying to assure themselves that if Swamp Thing is being this aggressive, he must have had a good reason. 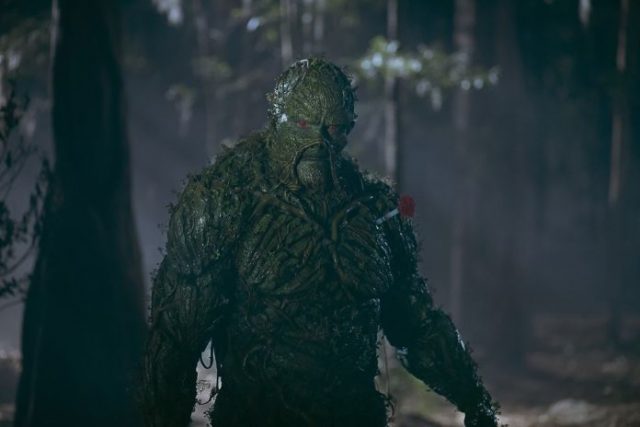 The idea of Swamp Thing losing more of his Alec side, and becoming more empowered and hyper-aware of the landscape around him via the power of The Green, is pretty cool, but for now, the show doesn’t do too much with this tease. It’s presumably meant to add a bit of a ticking clock for Abby, who is still trying to find a way to return Swamp Thing back into Alec, but for now, this struggle with Swamp Thing’s humanity simply serves as another transparent excuse to get Abby into the swamp, so she can learn about the big new development with one of her closest allies. Abby does have a heated confrontation with Avery beforehand though, wherein Avery claims that he won’t be so forgiving the next time Abby accuses him of being involved with conspiracies and injuries to her friends. Again though, nothing is done with this at this point, which is a little frustrating.

As for this big twist I’ve been hinting at with Swamp Thing, it’s kind of a cool turn on paper, though its setup and execution are a little flawed. After Lucilia had to shoot and kill a perp, following his implication that Matt was somehow involved with Alec’s death, Lucilia confronts Matt at the precinct, and Matt actually does admit to being the one who shot and killed Alec! Again, this is a really cool twist on paper, but the way that it was revealed felt a little bit underwhelming. Matt has been nothing but a devout hero for Abby especially throughout Swamp Thing’s entire run so far, a far cry from his more openly corrupt mother. Not only that, but Matt’s reason for killing Alec in cold blood is apparently down to Avery’s money, and him needing money because Marais doesn’t pay cops very well. Again though, there wasn’t really much of an indication that Matt was greedy, or had money problems before this point. Thus, this twist feels a little bit out-of-nowhere. Abby makes sense as a motivator for Matt doing something really horrible, but money? Not so much. 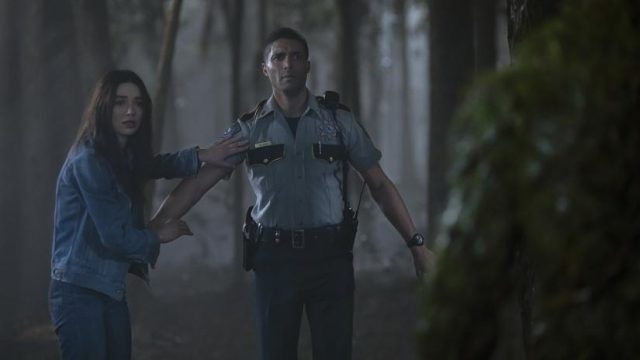 In any case, this episode also dealt with the fallout of Daniel sustaining a head injury, and falling into a coma. Daniel dreams about how he originally ended up stuck in Marais, which was once again due to the influence of the Phantom Stranger, this time posing as a movie executive. After the Stranger uses his apparent abilities to get Daniel the lead role in the Blue Devil movie, Daniel gets the fame and fortune that he craves, but eventually becomes bound to Marais as a result. This backstory doesn’t tell us much of what we don’t already know though, and even the episode itself seems to abandon it pretty quickly, once it establishes the important information that Daniel had also encountered the Phantom Stranger in the past. This is because Woodrue ends up using a prototype formula from the Swamp Thing sample to awaken Daniel from his coma, though with the unintended side effect of Daniel burning up, and being hot to the touch.

This results in a pretty mixed batch of emotions for Woodrue, who is able to go home and tell Caroline, as well as Avery, that his formula works. Obviously, Woodrue is unaware of Daniel’s former dealings with the Phantom Stranger though, and can’t figure out why an agonized Daniel keeps burning up. Daniel even goes straight to the Woodrue house, right when Avery is also visiting to get answers about the formula, resulting in an almost deadly confrontation, though one that Caroline defuses by simply tranquilizing Daniel. Well, why didn’t anyone else think of that? Regardless, Caroline also happens to get one of the better storylines in this episode, when it’s suggested that Woodrue’s obsession with perfecting his formula is starting to get to her, and is starting to strain their marriage, resulting in Caroline wanting to leave Marais. It’s shoehorned a bit awkwardly into the episode, but it does provide a better conflict for Caroline’s character, who’s been pretty much entirely in the background throughout this show’s run so far.

Swamp Thing’s abrupt cancellation seems to be becoming more frustrating with every passing episode at this point, mainly since the story developments meant for the future are now intruding over the main narrative. It’s clear that Daniel’s bizarre condition and Matt’s reveal as a crooked cop were meant to go somewhere in a future season, but for now, these turns just aren’t servicing the show’s main storyline very well. “The Price You Pay” does at least effectively spotlight a sense of diminishing humanity for both Swamp Thing and Woodrue though, as both become increasingly influenced by their respective agendas at the hands of The Green, and scientific advancement. Ultimately though, there’s still a ton of emphasis placed on Daniel’s planned Blue Devil persona here, which completely feels like a tease for an aborted second season, much like the foreshadowing for Woodrue’s eventual transformation into DC villain, Floronic Man, another turn that doesn’t seem like it’s going to properly happen during Swamp Thing’s forcibly limited run anymore. What really sucks about episodes like this though isn’t that they’re truly bad, but that they would be pretty good episodes if Swamp Thing was allowed to grow and flourish on its own terms. This makes Swamp Thing’s delayed Canadian run a lot more bittersweet as well, since everything that us DC fans can enjoy comes with the caveat that we can only enjoy it for so long.