Swamp Thing has really felt the pain of its sudden cancellation over the past couple of episodes, but fortunately, DC Universe’s troubled series finally managed to rebound with its seventh episode. “Brilliant Disguise” finally ditched the mysticism-themed Blue Devil storyline that perhaps serves as the biggest victim of Swamp Thing’s unexpected demise, and went back to focusing on good old treachery between the Sunderland and Cable families. At the same time, Alec discovers an unexpected new application for The Green, which motivates him to show a whole different part of the swamp’s world to Abby.

Following on from how the previous episode ended, Swamp Thing also presented a great opportunity for Abby to re-connect with Alec’s human side here, after a hallucinogenic flower allows Abby to see Swamp Thing as Alec again, at least for a little while. This leads to Alec showing Abby a greater demonstration of The Green, and its basis in nature, as well as The Rot, and how it’s meant to counter-balance The Green as the foundation of death, and the ceasing of life’s development. Despite The Rot being dangerous as well, it’s inevitably not long before Abby tries to run over to The Rot’s side of the swamp, in order to try and take valuable scientific samples.

Obviously, going so deep into The Rot goes terribly wrong too, eventually leaving Abby infected with a Rot-fueled pathogen that rapidly begins to devour her flesh! This is a really thrilling idea, and one that actually could have created a neat conflict for Alec specifically, rather than Swamp Thing. This unfortunately serves as the one disappointing element of an otherwise great episode though, since Alec manages to whip up a cure for the Rot infection rather easily, before the effects of the hallucinogen naturally wear off, and Abby goes back to seeing Alec as Swamp Thing again. Moreover, Swamp Thing subsequently tells Abby to leave the swamp and never return, right before Abby decides to leave Marais altogether, and go to the CDC’s headquarters in Atlanta. Obviously, Abby’s bound to eventually return to the swamps of Marais, but this supposed rift being opened between Abby and Alec would have worked better if The Rot was actually able to do real damage to Abby, or anything else.

Fortunately, there was plenty of damage done in the episode’s subplots, which were shared between the Sunderland and Cable families, as I mentioned. After Lucilia violently confronts Avery over his apparent involvement in Alec’s murder, and how Avery manipulated Matt into carrying out the dirty deed, Avery and Lucilia decide that the only choice they have is to finish the job, and destroy Swamp Thing permanently. This is already a pretty promising scenario, but it turns out even better than hoped, particularly once Avery turns a gun on Lucilia, believing that she’s lied about Alec’s condition, and is actually taking Avery deep into the swamp to kill him. The best part about this situation is that Avery isn’t wrong either! Matt knocks Avery out right as he’s about to fire on Lucilia, apparently debating whether or not to go through with the act off-screen, though obviously, he eventually comes through to protect his mother.

The best turn was yet to come here though, after Lucilia and Matt actually get on the water, trying to find a place to dump Avery’s body. It’s here that an injured Avery blurts out something that would inevitably cause permanent damage to Matt’s and Lucilia’s mother/son relationship– Avery is actually Matt’s father! After Avery is seemingly shot during an escape attempt soon afterward, Lucilia is forced to admit the truth on shore as well, tearing apart Matt’s world in the process. This makes entirely too much sense, considering Avery’s and Lucilia’s long romantic history, and Avery inexplicably shacking up with Maria in the end. It would seem that Avery potentially bailed on raising Matt, and Lucilia hid the truth from her son as a result. It’s anyone’s guess how Lucilia and Avery kept their affair going for so many years amid this uncomfortable truth, but either way, this was a hell of an emotional twist for Matt, that’s for sure!

Maria also spearheaded another great subplot in this episode, after Avery is forced to step out with Lucilia. Maria is subsequently left to host Caroline and Jason Woodrue, during their pitch to a representative from the Conclave Group, the shadowy organization that Avery previously killed his banker over. The Conclave are clearly very interested in the scientific applications of Jason Woodrue’s research, which Avery was meant to explain to them, before being unable to make it to the pitch dinner. Better still was that Maria and the Woodrue’s conspired to drug the Conclave representative into approving further resources for the experiment, while in turn completely turning ownership of the results over to Maria. This naturally means that Maria was actually in on the Cable’s going out to murder her husband as well, which would be the final act she would need in order to seize control of the swamp experiments. It’s ruthless, it’s dramatic, and it’s such a perfect end for Avery Sunderland! Or, at least it would be, if Avery didn’t crawl out of the swamp, somehow still alive after all of his injuries. Uh oh! 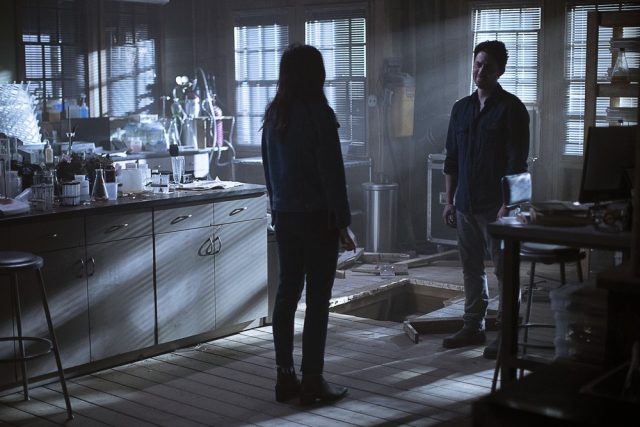 It’s awesome to see Swamp Thing so exceptionally find its footing again, after having to trudge through some less effective, under-utilized storylines over the previous two episodes. “Brilliant Disguise” however finally goes back to focusing on the horror and treachery that initially made this infuriatingly short-lived show such a gem, particularly with such dark turns for both the Sunderland’s and the Cable’s alike. As much as Avery surviving being beaten, stabbed, shot and nearly drowned feels pretty damn unlikely, it’s nonetheless true that the swamps of Marais are very mysterious, and who knows how they may have helped Avery defy the reaper, right as he suffers the ultimate betrayal from not one, but both of the women he loves! The rift between Abby and Alec/Swamp Thing meanwhile definitely feels more forced, but even that at least sets up some good promise for later, even if Abby is bound not to leave Marais behind for long.