The Arrowverse is continuing to prepare for the impending Crisis on Infinite Earths crossover, even if it’s The Flash and Arrow that seem to be shouldering the bulk of that setup. “A Flash of the Lightning” thus continues to provide another big tease for this year’s big CW crossover event on The Flash, as Barry struggles with the revelation from The Monitor that he must die in order to save his world. At the same time, Killer Frost starts trying to take the wheel of Caitlin’s form, while Cecile’s powers tip her off to a prosecuted repeat-offender metahuman who may just be innocent of her first murder charge.

The Flash still hasn’t fully tightened its narrative after some of the problematic plotting from last season especially, but the show nonetheless seems to be gradually improving once again, in Season Six’s second episode. This episode starts plenty strong with the Crisis on Infinite Earths teases as well, which involve Barry running over to Earth-3, in order to consult Jay, after an anti-matter wave blocks Barry from running into December 2019, in an effort to witness how he dies. It turns out in fact that anti-matter signatures have started popping up all around the Multiverse, according to Jay and his wife, Joan Williams (who, consequently, is a doppelganger of Barry’s late mother), and that this could be the indicator that the Crisis facing the Multiverse will officially be affecting all of the infinite Earth’s (even if we, the viewers already knew that), not just Earth-1.

It certainly would have been unfulfilling to see Barry witness his own death fully at an early stage in October, even though it still feels like a bit of a narrative cheat to start teasing Barry’s death at all, when Oliver already made a deal with The Monitor to spare both Barry and Kara during last year’s Elseworlds crossover event. Due to Oliver’s deal, it seems fairly obvious that Barry will indeed find a way out of dying in the Crisis, which makes some of the suspense involving Barry’s death not really land here. The idea of Barry having to face a seemingly inevitable sacrifice, seeking wisdom from Iris and Joe in the process, is a good one, but it would have been even better if Barry’s death didn’t already feel like a non-issue. After all, even from a practical real-world standpoint, I seriously doubt that The CW would hamstring their current highest-performing DC drama by killing off its main hero, especially since that very issue is at the core of Arrow’s now-airing final season to boot.

Regardless, another clever storyline also filled out this episode nicely, which actually provides a standout turn for Cecile. After being given a seemingly open-and-shut case surrounding a radio wave-manipulating metahuman who has been in and out of juvie and Iron Heights since her teens, Cecile is ready to seek a maximum penalty after the woman is charged with murder, only for Cecile’s powers to indicate that the criminal, Allegra Garcia, is actually innocent. This was a great way to mix up The Flash’s usual metahuman-of-the-week formula, playing with the show’s own tendency to write off most metahumans as murderous criminals, something that’s even reflected in Central City’s own justice system at this point.

Inevitably though, Allegra truly is innocent, eventually opening up to Cecile, after Cecile reveals that she also has metahuman abilities. It turns out that Allegra has a cousin, Esperanza, who was also hit by the Particle Accelerator explosion in juvie, and received the same radio wave-manipulating powers, along with also having the same yin-and-yang tattoo that Allegra does, which is how an eyewitness formerly identified Allegra as the murder culprit. This eventually results in Esperanza, now going under the villain moniker, Ultraviolet (who doesn’t exist in DC Comics lore, even though Allegra does), attacking the CCPD precinct, whereupon Barry defies his Speed Force injuries to take her out. This not only provided a good way to bring around Barry’s lesson on resilience against impossible odds, but also nicely vindicated Cecile, who is now deciding to give up being Central City’s D.A., in favour of being a defense attorney for metahumans. Honestly, that’s not a bad idea either, especially considering that even Central City’s civil servants seem to want to paint most metahumans with the same brush at this point.

The remaining subplot involves Killer Frost, as I mentioned, who now appears to be going by the less aggressive moniker, ‘Frost’, when she takes control of Caitlin’s body. After Frost is given a nanite cocktail from Ray Palmer (God, I miss the Legends. 2020 can’t come fast enough!), which allows her to blend in with Caitlin’s more human features, Frost attends Kamilla’s art exhibit with Cisco and Ralph, only to balk at what she sees there. Despite this however, Cisco catches Caitlin trying to learn to draw later on, and thus learn to express herself. This is kind of a sweet subplot, though it doesn’t really fit with the rest of this episode’s storytelling, and thus often ends up intruding on the other, more interesting storylines. That said, it is nice to see that the show already wants to find a way to humanize Frost while she’s in control, beyond making her simply just a devil-may-care tough girl who mostly exists to cause social headaches for Team Flash. 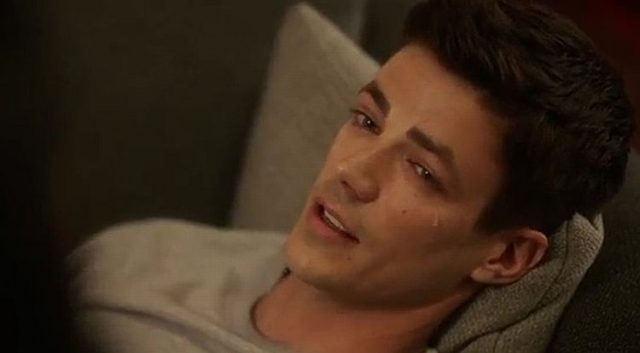 All the while, Ramsey bookends the episode with a bit more Bloodwork development as well, namely when he accidentally ‘kills’ a gun dealer with his blood powers, only to later discover that the man is alive, upon trying to study the substance that he filled the guy with during an autopsy. Ramsey also isn’t fitting well with the rest of the narrative at this point, but at least his powers feel more intriguing than the tiresome, plot-convenient abilities of Cicada from last season. Overall, like I said, “A Flash of the Lightning” is still working out some of the leftover narrative kinks that The Flash has been struggling with over its past couple of seasons especially, but the show is slowly making progress. We got a nicely distinct metahuman conflict with Cecile this week, and better still are the exciting teases for the Crisis on Infinite Earths crossover with Barry. Much like Arrow, it seems like The Flash is going to be fully Crisis-focused for the rest of 2019, which probably means that Bloodwork will be spending a lot of time in the background until 2020, but I suppose I can deal with that, especially if Cecile’s new gig, and Allegra’s new internship at the Central City Citizen, can lead to more interesting and unpredictable metahuman storylines in the meantime.