It’s been a hell of a run for Arrow, as the show now kicks off its eighth and final season with, “Starling City.” The CW’s flagship ‘Arrowverse’ series is bound to have a memorable last hurrah as well, with Oliver taking on a final series of missions for The Monitor, in preparation for the coming Crisis on Infinite Earths crossover event that The CW will host between its DC shows this Winter. Oliver’s final major task as the Green Arrow appears to be spanning the Multiverse already as well, with all of Arrow’s final season premiere’s events taking place on Earth-2, where a simple fetch quest gets complicated after Oliver re-encounters some familiar faces.

After ‘spawning’ on Earth-2’s Lian Yu, Oliver pretends to be his Earth-2 doppelganger (remember that The Flash previously established that the actual Oliver Queen of Earth-2 died on the Queen’s Gambit back in 2007), coming home to Starling City (it wasn’t renamed ‘Star City’ on Earth-2), and reuniting with the living doppelgangers of Moira and Malcolm! Better still is that Tommy is still alive on Earth-2 to boot, with the Queen family being wealthy, happy and united in a seemingly idyllic existence! There is one small exception however, namely Earth-2’s Thea apparently having died many years ago from a Vertigo overdose, mirroring the fate that she avoided on Earth-1, thanks to Oliver’s intervention. Still, the remaining Queen/Merlyn family members are thrilled to have Oliver back home, which also doubles as a convenient chance for Susanna Thompson, Colin Donnell and John Barrowman to make a re-appearance for Arrow’s last batch of episodes, however fleeting. 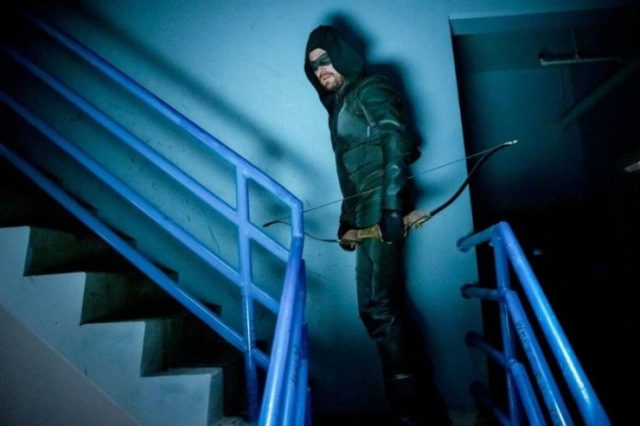 The Monitor’s mission for Oliver on Earth-2 nonetheless involves Oliver stealing some Dwarfstar from the merged Queen Consolidated and Merlyn Global corporations, which he finds to be missing, along with several dead scientists being left in its wake. After Oliver is confronted by Earth-2’s apparent Green Arrow as well, he reunites with Laurel, who is the resident Star City vigilante protector on Earth-2. The best twist here however is that Earth-2’s Green Arrow not only works for Laurel, but he’s also the Earth-2 doppelganger of Adrian Chase, one of Arrow’s overall best arch-villains from Earth-1! Oliver naturally provides an assist to Earth-2’s Team Arrow though, after getting used to the former Prometheus being one of the good guys in this parallel reality, but despite suspecting Malcolm Merlyn, Oliver is instead attacked by another Dark Archer after Merlyn is confronted!

This brings me to one of the small nagging issues with this episode, and that’s the fact that Oliver seems uncharacteristically thick when it comes to Earth-2 doppelgangers. I get that The Flash and his team have done a lot more poking around parallel Earth’s in the Arrowverse at this point, but even so, Oliver is very well familiar with the principles of the Multiverse by now. Thus, the only reason he’d suspect Earth-2’s Malcolm Merlyn is because he’s not really using his head. Sure enough, the Dark Archer of Earth-2 also happens to be Tommy, in a twist that, frankly, is a little predictable. Regardless, Tommy stealing the Dwarfstar for his own ‘Undertaking’, wherein he plans to level the Glades with a Dwarfstar bomb instead of an earthquake machine, is another great way for Arrow to come full circle, especially when Earth-2’s Dinah and Rene end up working as Tommy’s thugs! 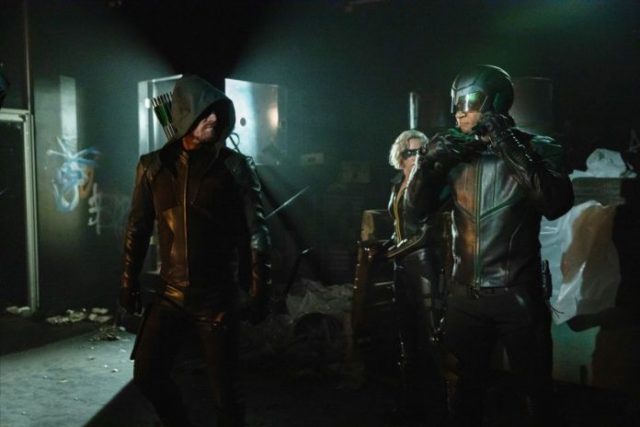 Fortunately, Earth-1’s Diggle conveniently borrows Cisco’s Multiverse-hopping device to get to Earth-2 and ask Oliver what’s going on (after also posing as Diggle’s Earth-2 doppelganger to get close to Oliver as a bodyguard, in another amusingly nostalgic turn), leading to Oliver confiding in Diggle that he’s going to die, and that he’s undertaking some last missions with The Monitor, because a ‘Crisis’ is coming. Even when Oliver tries to knock out Diggle and leave him behind however, Diggle follows Oliver wherever he goes, even bailing Oliver out after he manages to get out of Tommy’s chains, only to be cornered in the process. This at least leads to lots of solid action for this episode’s climax, but it definitely would have been ideal if Tommy wasn’t lamely talked down from destroying the Glades with another hokey pep talk. Take a shot if you’re playing that Arrowverse drinking game, folks! In fact, it would probably have been a more tragic and emotional result if Tommy had gone through with destroying the Glades, and Oliver had to put him down again, especially since we get our dark turn anyway in the end. After leaving Tommy at the police station, Oliver and Diggle notice a weird ether gradually engulfing the city, which Laurel arrives too late to warn them about! As the Earth-2 doppelgangers, and the entire SCPD building, turn to dust all around them, Oliver, Diggle and Laurel thus have no choice but to hop in a portal back to Earth-1, as Earth-2 itself appears to be no more!

The mostly thrilling and nostalgic core storyline on present-day Earth-2 serves up plenty of frequent highlight moments throughout this season premiere, but hopefully you weren’t sick of the flash-forward storyline from last season, because guess what, it’s back! Yes, in a slightly surprising turn, Arrow is keeping the 2040-era flash-forward storyline going into its final season, showcasing Mia, Zoe, William and Connor, as the new ‘Team Arrow 2.0’ of the future, working to free an executive from J.J. Diggle’s Deathstroke Gang, and struggling to come together as a unit. This flash-forward storyline mostly serves to inject a bit more action into the episode, while teasing the planned spin-off series that entirely centers around these characters, which The CW recently announced. Beyond that however, the flash-forwards just kind of take up space, yet again. The thing is, I don’t hate this flash-forward concept by any means, but it doesn’t tend to mesh well with present-day events on Arrow, and that continues to be the case more than ever with this final season, which is clearly being saddled with the bulk of setup for this Winter’s Crisis on Infinite Earths crossover. 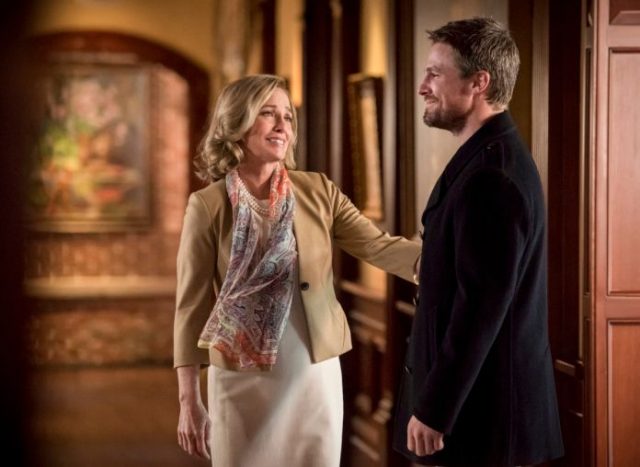 Still, “Starling City” is a fitting and fun final season premiere for Arrow, one that allows several legacy actors to re-appear on the show in an entertaining Earth-2 storyline, before Earth-2 itself appears to become the first Multiverse world to be visibly destroyed by the coming Crisis event (it’s implied that Earth-90, among other worlds, are also toast by now, though this is the first time we’ve actually seen a parallel Earth get destroyed by the coming Crisis!). The former Arrow actors who opted not to return to the show definitely have their absences stick out like a sore thumb here though, most notably Emily Bett Rickards, who ducked out of Arrow before the final season was ordered, leaving a pretty big Felicity-sized hole in the show’s lead ensemble. Still, Oliver and Diggle sticking together even amid certain death is pretty heartwarming, and Laurel was thankfully spared from being dusted alongside her entire Earth too. I really think that the flash-forward storyline would thrive best on its own show at this point, which seems to be The CW’s plan anyway, but regardless, the Crisis teases continue to excel, while also managing to work efficiently at moving Arrow toward its overall conclusion in the near future.

Arrow 8.1: "Starling City" Review
Arrow kicks off its eighth and final season with a thrilling, nicely nostalgic episode in, "Starling City", which also gives us our first look at the stakes behind the coming Crisis on Infinite Earths.
THE GOOD STUFF
THE NOT-SO-GOOD STUFF
2019-10-25
83%Overall Score
Reader Rating: (0 Votes)
0%