Now that The Walking Dead has established where the protagonists and their enemies both stand, a fresh conflict will inevitably bring the two factions at odds once again, after a walker problem emerges at Alexandria. “Ghosts” presents an interesting core storyline for several of Alexandria’s representatives, after they must meet with Alpha at the North border, in order to answer for the times when they crossed into Alpha’s land. At the same time, Alexandria has their hands full with escalating walker hordes that keep throwing themselves at the town’s defenses, despite Lydia’s protests that the walkers aren’t the work of the Whisperers.

Alpha, in fact, makes the same claim. She even goes as far as to forgive the survivors for the three times they crossed her borders (yes, she also noticed the crossing during the Winter storm, and Aaron’s stunt from the season premiere), though re-draws the borders in lieu of bloodshed. After Carol makes a failed effort to shoot Alpha dead as well, the North border is also re-drawn, with the Whisperers seizing more and more land as they continue to be provoked. The Whisperers largely return to the background after this, serving as the kind of shadowy threat that they really function best as, and this is great, since it leads into a controversial, but effective turn for Carol, who is feeling the fatigue of dealing with the walkers and the Whisperers as much as anyone else at Alexandria.

After Carol claims to see Whisperers at the subsequent campsite that’s put together by herself, Daryl and Michonne, the three decide to instead take refuge in a school, where there are more walls around them. Despite this however, neither Daryl nor Michonne see any true evidence of Whisperers in the proximity, leading to them doubting that Carol is seeing what she thinks she’s seeing. This creates a strong core conflict for the episode, as Carol’s clear dependence on caffeine pills begins to take a toll on her. Carol begins hallucinating, mis-remembering and even imagining entire conversations with Daryl, leaving viewers to constantly and effectively question her judgment at any given moment. This seemingly culminates with a terrifying rope trap sequence as well, wherein Carol must quickly cut herself free, and fight off several walkers and Whisperers. It’s around this point that Daryl and Michonne finally come to Carol’s aid, and see the threat that Carol perceived beforehand, or at least, they appear to.

This certainly makes for a nicely interpretive storyline for an increasingly unhinged Carol, who is justifiably taking a turn to the mentally unsound, rather than just running away and refusing to kill for the umpteenth time. Outside of Carol however, we still got plenty of excitement with the other characters at Alexandria, particularly Aaron and Negan, who headline another standout storyline together. After Gabriel forces Aaron to take a reluctant Negan along to help fight the walkers ravaging Alexandria’s defenses, Aaron makes it clear that Negan can’t be trusted, even denying him a superior crowbar weapon in lieu of Negan being forced to use a broom stick. After an emotional confrontation between Negan and Aaron leaves Aaron with a walker full of hogweed in his face however, Negan disappears, as a temporarily blinded and enraged Aaron struggles to find him. 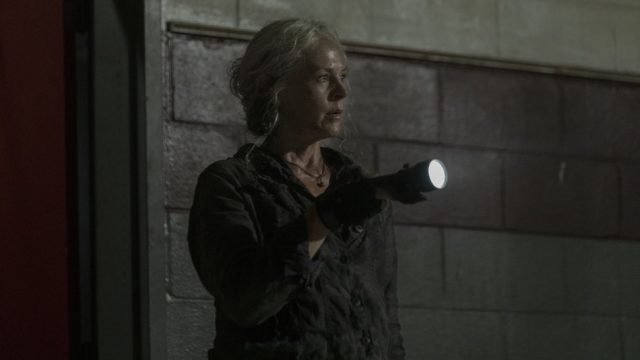 As great as this subplot is, I must say that I do have a hard time believing that walkers would pour out toward Alexandria in such great numbers, without the influence of the Whisperers. The episode tries to explain this away by saying that the satellite crash is drawing them all out, but in that case, wouldn’t the walkers just go toward the satellite? Why are so many of them seemingly deliberately shifting toward Alexandria? Maybe the satellite is on the other side of Alexandria, but this still feels problematic as an explanation, since walker hearing really shouldn’t expand as far as the entire damn county! Regardless though, the Negan/Aaron subplot is still a winner, with Negan ultimately bailing Aaron out from another walker jam, and reconciling with him. This is another great redemptive turn for Negan, who is showing a more vulnerable and sympathetic side in the post-Savior era, even going as far as to save Aaron’s life, when he could have easily let him die. I’m still not going to go as far as to say that Negan is a true Alexandrian by this point, but he’s definitely a better man than he once was, and his time in Alexandria has no doubt played a big part in that.

That said, it would have been nice if the ending portions of the episode didn’t suddenly veer in an entirely different direction, which makes the concluding story moments feel tacked-on. This is especially evident with a quick aside surrounding Rosita and Eugene, wherein Rosita rather impulsively tells Eugene that they will never be a couple. This feels very forced and out-of-place in an episode like this, and while I understand that Rosita is tired, her big outburst feels rather contrived and needlessly mean-spirited here. The material between Siddiq and Dante at least fares a bit better, even if it also feels like it belongs in another episode. This moment involves Siddiq struggling to patch up Carol’s injuries, and Dante having to do it for him, before confessing to Siddiq the following morning that he was a former military medic who used to suffer from severe PTSD. I’m looking forward to seeing how this Dante revelation develops for sure, even if shoehorning it in at the end of this episode, alongside the especially trite Rosita/Eugene conflict, feels a little clumsy. 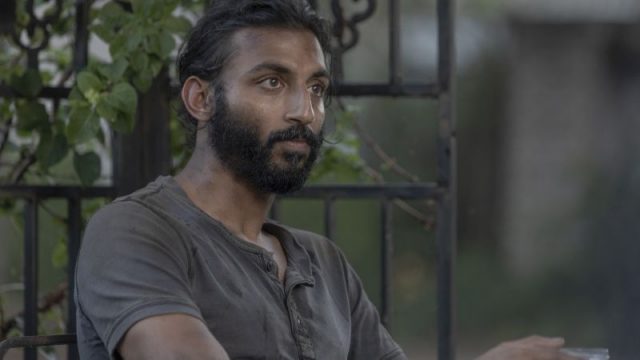 All in all though, “Ghosts” still presents plenty of thrilling suspense and excitement for The Walking Dead, even if it still has a few narrative problems here and there. Seeing Carol’s mind gradually unravel is proving to be pretty intense and riveting, just as Negan’s continued commitment to self-betterment also remains compelling to watch. The minimized presence of the Whisperers is also well-implemented, even though the walker onslaught at Alexandria is rather difficult to believe, after claims that the Whisperers had no involvement with it. The rather forced, nasty way that Rosita rebukes Eugene’s devotion is also needlessly cruel and contrived, especially after a long, successful night of the two fighting walkers together. All’s well that ends well at least, since Alexandria’s citizens successfully repel the walker onslaught, and Carol gets successfully patched up after her own rough night, but with Alpha and the Whisperers continuing to shrink the land that they’ve allotted to the protagonists, the true battle against Alpha’s crew is no doubt about to begin, hopefully presenting even more excitement and drama from here.

The Walking Dead 10.3: "Ghosts" Review
The Walking Dead delivers a nicely harrowing episode in, "Ghosts", as Carol's sleep deprivation begins to warp her mind, and Negan is forced to assist in a defense effort for Alexandria.
THE GOOD STUFF
THE NOT-SO-GOOD STUFF
2019-10-26
78%Overall Score
Reader Rating: (0 Votes)
0%