Things look pretty grim for the titular character of Swamp Thing at this point, now that Avery’s and Dr. Woodrue’s Conclave stooges have managed to capture and confine him in an impromptu mobile lab. “The Anatomy Lesson” thus picks up after Abby is just barely too late to save Swamp Thing, with Abby then subsequently employing Liz to help her get Marais’s Green-fueled anti-hero back. At the same time, Matt continues to struggle with the fallout from believing he’s killed Avery, while Daniel decides to embrace his eccentric destiny, as a cinematic character that’s starting to become all too real for him.

Swamp Thing’s gruesome and foreboding capture of the titular character is done especially well in this episode, with Woodrue all too eager to dissect Alec’s twisted new form, and discover what makes it tick. Again, the effects are pretty superb here too, as Woodrue discovers false organs that don’t actually appear to serve a purpose, and are simply a byproduct of Swamp Thing’s memories from being human. It’s at this point that a startling discovery is made by Woodrue (albeit one that avid DC fans who have read Swamp Thing comic books would probably already know), namely that Swamp Thing is actually a plant construct that merely carries the consciousness and memories of Alec, and is not actually Alec himself. This disturbs Swamp Thing greatly, as he’s nonetheless forced to keep enduring Woodrue’s dissection efforts.

Despite this big hook of the secret behind Swamp Thing’s anatomy and true form being revealed however, most of this episode actually revolves around Abby and Liz, as they desperately try and locate the secret lab that Swamp Thing is being held in. Initially, the two attempt to visit Caroline, whereupon they discover that her Alzheimer’s is getting worse, and yet despite this, Woodrue has abandoned his wife in an empty house. This is an effectively sad byproduct of Woodrue’s growing obsession with Swamp Thing, leading him to ironically neglect his ailing wife in the present, due to fixating so much on the prospect of curing his wife for the future. It’s an effectively tragic state of affairs, especially when Caroline insists that Abby and Liz forgive Woodrue, whose brilliant mind consumes him with the desire to advance and understand the forces of nature.

This is also the point where Abby and Liz discover evidence at the Woodrue house, indicating that Swamp Thing is being held and dissected at Avery’s old cement plant. The problem however is that Abby and Liz are about to walk into their deaths, as revealed to Daniel in the hospital by the Phantom Stranger. Yes, the Phantom Stranger is back, once again indicating that Daniel has a great destiny, but it’s up to him to embrace it. The Stranger frees Daniel from his restraints, and Daniel briefly considers leaving Marais as well, only to inevitably embrace the chance to be the Blue Devil, for real. This is cool, though from a narrative standpoint, it still makes Daniel a weak link in the show’s ensemble, since he’s merely serving as a Deus Ex Machina for Abby and Liz at the Conclave facility. Like I said, this isn’t the fault of Daniel’s character, since he clearly had a larger arc planned for aborted future seasons, but this is nonetheless a shortcoming created by Warner Bros., after Swamp Thing was quickly and unjustifiably cancelled. 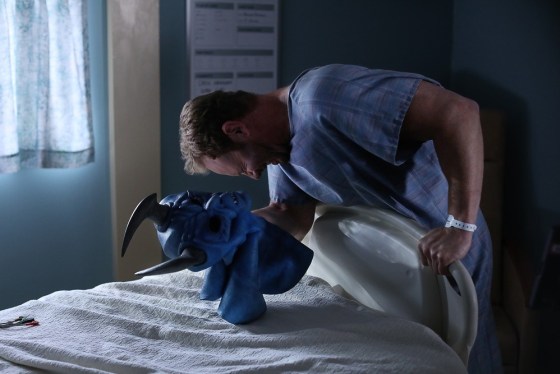 Speaking of unresolved story arcs, the show has just one episode left after this as well, meaning that we likely won’t see big payoffs to other big twists in the episode. Matt drinking himself into a stupor, and crashing his car in the process, is a very tantalizing narrative prospect, but it will probably never have a true payoff at this rate. Likewise, Avery manipulating his judicial connections to get Maria thrown into a mental institution, citing her failed effort to kill Abby in the swamp a few episodes back, is a nicely chilling turn that puts Avery back on top in the Sunderland family. This was clearly meant to be expanded upon through a prolonged duel between Avery and Maria, but it looks like we’ll never see that duel unfold, on account of Swamp Thing’s abrupt cancellation, and that’s really tragic.

Even Abby and Liz breaking Swamp Thing out of the Conclave facility, allowing Swamp Thing to find Alec’s body, and prove to Abby and himself that he’s not truly Alec anymore, doesn’t totally land with its true thematic potential. Swamp Thing having to come to grips with no longer being truly human, and having to struggle with that on account of Alec’s lingering feelings for Abby especially, would have made for a great second season foundation for this show! Instead, “The Anatomy Lesson” once again gets dragged down a bit by Swamp Thing’s premature cancellation, albeit not as badly as some other recent episodes did. We’re once again seeing promising narrative elements like the Blue Devil arc get prematurely and frustratingly abandoned here, and it seems as if the promising drama with Matt and Maria will never truly get resolved either. At the very least, the upcoming season/series finale should hopefully provide us with an exciting final stand for Swamp Thing and Abby, as Conclave forces inevitably come after them again. I’d settle for that, at minimum, even though I’ll always be upset regardless that Swamp Thing had its wings clipped after already proving how much it could soar.