Now that Alfred has finally avenged Esme successfully, there’s nothing left but to answer to the law in Pennyworth’s penultimate Season One episode, or so it would seem. “Alma Cogan” begins with Alfred refusing to give up Bet, after she saved his life and helped him take revenge for his fiancee’s death, and thus, he’s locked in the dungeons for his actions. Meanwhile, the Prime Minister makes the surprising decision to host a free election, allowing England to choose its rulers fairly, and even seemingly giving the Raven Society and the No Name League a fair shot at leadership to boot! Naturally though, this situation isn’t quite what it seems, and some inevitable treachery from the established British regime ends up presenting a surprising opportunity for the incarcerated Alfred.

With just one episode of Pennyworth being left in the show’s debut season after this, “Alma Cogan” spends virtually its entire runtime laying the groundwork for the coming season finale, as the Raven Society and No Name League both take the time to build their political platforms and consider their options, alongside the Queen and the Prime Minister. With the Prime Minister believing that the Raven Society and No Name League will lead to each other’s downfall if they’re given the freedom to try for votes, Alfred, Martha and Thomas all end up separately roped into these platforms’ various agendas, while Bazza and Dave Boy immediately throw themselves into an effort to liberate Alfred from prison. Not that this matters for long anyway.

Indeed, despite the exciting hook of Alfred having to survive in the crowded and vicious dungeons of London, Pennyworth ends up abandoning this idea disappointingly quickly. While there’s some fun teases as to how tough and ruthless Alfred is in the prison, especially when Sandra visits to indicate what Bazza and Dave Boy are planning, Inspector Aziz visits Alfred not long afterward, and immediately grants him his freedom. This makes the prison storyline a huge missed opportunity, even if Alfred is at least given another exciting story direction through which to permanently buy his freedom; Assassinating Lord Harwood. With Harwood gaining increased support in the country, and news of a pact between the Raven Society and the No Name League reaching the Prime Minister, Alfred is thus employed to make sure that Harwood dies, so the pact can’t go through.

This would seem to neatly wrap up one of the agendas behind a major antagonist, and antagonist party, on Pennyworth. We know that Alfred is perfectly capable of taking out Harwood after all, so long as he has a clean shot. This inevitably gets complicated however, with the very clever twist of Martha and Thomas being hired to represent the No Name League during the pact negotiations, at Undine’s and John’s insistence. This was a really smart way to interrupt what would otherwise be a straightforward job for Alfred, with Alfred predictably refusing to fire on Thomas and Martha, because he’s acquainted with them. Alfred even disables the police vehicles so that Thomas and Martha can get away, leading to them enjoying the exhilaration of escape together. Perhaps this is the first spark behind their expected romance? 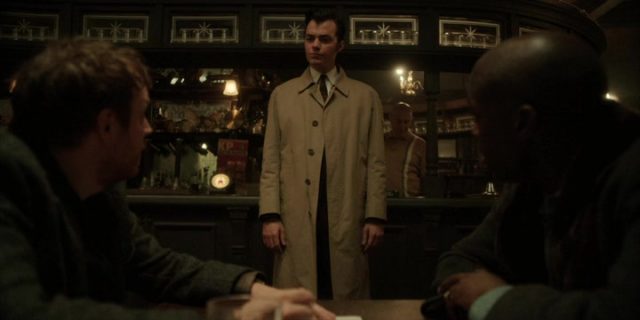 There’s also another abrupt and tragic turn with the Pennyworth family in this episode, namely that Arthur has apparently been diagnosed with terminal lung cancer. While this is rather sudden, with no real foreshadowing whatsoever, it does put Mary in an interesting predicament, since Alfred’s refusal to follow through with his assassination job means that Mary will potentially soon have no one close to her at home. Alfred ends up having to go on the run anyway when he opts out of his job too, even though I imagine that Alfred’s run as a fugitive will probably be about as long as his run as a prisoner. Despite that though, this could present an interesting idea for the show’s fast-approaching season finale, one that will force Alfred to make peace with his father, despite inevitably having to learn that his father supports Harwood.

This episode delivers a pretty exciting ending to boot, with the Sykes sisters cornering the Queen on a hunting expedition, to some unknown end, which presents a great cliffhanger to precede Pennyworth’s first season finale. Not every element of the narrative may have been properly fleshed out here, but, “Alma Cogan” nonetheless has Pennyworth expertly primed for an exciting conclusion to its debut season. Alfred’s prison stint is disappointingly short-lived, but his exciting mission to take out Harwood, only to be deterred by the presence of Thomas and Martha, made for a great centerpiece storyline in this episode. The Pennyworth family drama is also pretty promising, if also kind of sudden, but I suppose that’s sometimes how cancer diagnoses among parents go. Again though, the real narrative ace-in-the-hole for Pennyworth seem to be the Sykes sisters, who have now more or less taken the Queen hostage, likely setting up Harwood for a big advantage in the coming season finale. The stage is set for an explosive battle for England’s soul now, and despite Alfred purporting to leave the country, I imagine that he still has his part to play when it comes to protecting, or destroying, the Crown.

Pennyworth 1.9: "Alma Cogan" Review
Pennyworth presents an exciting penultimate episode for its first season in, "Alma Cogan", as a free election gives the Raven Society and the No Name League their own shots at leadership, and an unlikely partnership.
THE GOOD STUFF
THE NOT-SO-GOOD STUFF
2019-11-18
84%Overall Score
Reader Rating: (0 Votes)
0%